This is the edited transcription of the opening remarks by Natalia Vitrenko to the Schiller Institute conference on September 6. Dr. Vitrenko is a former member of parliament and was a candidate for president of Ukraine in 1999. Subheads have been added. 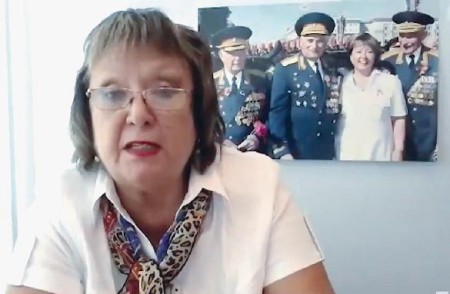 Dear conference participants, dear Mrs. Helga Zepp-LaRouche, I would like to thank the organizers of this conference, which is on a topic of extraordinary importance for the world community. And thank you for allowing me, a politician from Ukraine, the opportunity to speak.

Events in the world today cannot fail to alarm all people who care about the fate of their own country and of world civilization as a whole. We are facing an acute aggravation of irreconcilable contradictions. History teaches us that such contradictions are what lead to world wars. And if a Third World War comes, a nuclear war, that will indeed be Armageddon. How real is this possibility? Unfortunately, the facts stubbornly indicate that the threat is real.

First and foremost, the world right now has been left without any limitations whatsoever on strategic and tactical offensive weapons. In 2009, the Strategic Arms Reduction Treaty (START-1) expired. The Intermediate-range Nuclear Forces (INF) Treaty between the U.S.A. and Russia has been terminated. This means that the United States can place mobile cruise missiles in European countries such as Romania and Poland.

Russia has stated that if these plans are implemented, it will deploy ground-launched cruise missiles of its own, and that not only the launch sites of these U.S. missiles would be destroyed, but also the places where the decisions would have been made to launch missiles against Russia. And this might be not only on European territory.

The treaty between the Russian Federation and the United States on Measures for the Further Reduction and Limitation of Strategic Offensive Arms (New START), which came into effect on February 5, 2011, expires in 2021. Moscow’s call to extend it has met with no positive reaction from the Washington side. That means that in February of next year, the world will enter a new and completely unrestricted phase of the arms race. That constitutes a threat to provoke a Third World War.

In my view, that is exactly what NATO is preparing for. The NATO alliance has become a supranational agency, which brushes aside the UN Charter and international law, which would be the basis for defending just and peaceful ways of resolving any conflicts. In violation of all previous agreements, NATO is persistently approaching the borders of Russia. This is a huge geopolitical problem.

I would like to take this opportunity to propose that our conference should appeal to the leaders of the U.S.A. and Russia to extend the New START Treaty.

There are likewise irreconcilable contradictions between labor and capital (the impoverishment of working people, while the incomes of the oligarchy increase); between the leading capitalist countries and the Third World countries; between the developed countries’ requirements for natural resources (above all, energy) and their limited ability to supply them from their own territory. The global financial bubble of derivatives is growing, which means an increase, as well, of the threat that it will explode.

Let me give you some facts: According to data from Oxfam, 82% of all the wealth that is produced is in the hands of 1% of the people on the planet. Meanwhile, the incomes of the poorest part of the world’s population are not growing. There is stunning inequality among countries, as measured in GDP per capita (at purchasing power parity). World Bank statistics show that in 2018 this indicator was 60- to 70-fold lower in Niger and Burundi than in Switzerland and the U.S.A. ($1,100 and $700 per capita vs. $65,000 and $62,900, respectively).

A clear example of the rising clashes over energy resources is the U.S. pressure against building both the Nord Steam 2 and the South Stream pipelines. Nonetheless, the Americans keep on with the same refrain: the supremacy of law, the principles of free trade, and so on and so forth.

Regarding the threats to the world economy from the growth of national debts and of derivatives, suffice it to recall the warnings of our Lyndon LaRouche, about the monstrous social and economic consequences: the deaths of several billion people, if the derivatives bubble explodes.

It must be noted that the growth of tension in all these areas is taking place despite the work of powerful international institutions, which are supposed to prevent such conflicts, or at least settle them quickly and fairly. I mean the United Nations Organization, the World Trade Organization, the World Bank and the European Bank for Reconstruction and Development (EBRD). But international law is not working, and more and more issues on the world scene are being resolved by force. Various types of sanctions, insurgencies, and armed conflicts, “color revolutions” and coups d’état run from abroad: these all provide convincing confirmation that this is the case.

The main orchestrator and director of these processes is the United States. But if only, at least, they themselves were to exhibit unshakable might and stability on their own part! No, indeed! Today in the U.S.A., all the preconditions have come together for a destructive social explosion. The American Democrats have refined their “color revolution” techniques in various countries around the world. But after Hillary Clinton’s recent advice to U.S. Presidential candidate Joe Biden not to accept a victory by Trump under any circumstances, it became clear that a “color revolution” is being readied for the United States, as well. The battle-to-the-death between the Trump nationalists and the Democratic trans-nationalists could lead to a civil war and disintegration of the country. And that is an enormous problem for the world community.

Under these conditions, any strengthening of the power of Russia and China is like death for the U.S.A. This explains their persistent efforts to make Ukraine continue the war in the Donbas region and to install their own henchman in Belarus to replace Lukashenka.

First, on Belarus, a country I know well, and visit practically every year.

On August 9, Alexander Lukashenka won a clear-cut victory in the presidential elections there. It was a victory he had earned, since during the 26 years of his Presidency, Belarus has revitalized its economy and is developing it well. And they have preserved the state-owned enterprises as a reliable base for solving social issues, public ownership of land, free health care, housing and utilities at affordable prices, culture, and sports. They have done this while integrating with Russia in the “Union State.”

Ukraine is a complete opposite. Here are the results:

During the past 26 years, the population of Belarus has shrunk by 5% (500,000 people), while Ukraine’s has fallen by 40% (20 million people). In Ukraine, we are now in the seventh year of bloody slaughter in the Donbas, where 15,000 people have been killed, hundreds of thousands wounded, and millions of people have been made refugees. Average GDP per capita (at purchasing power parity) in Belarus has increased 18 times over, during Lukashenka’s Presidency, while in Ukraine it had reached only 80% of its 1990 level by 2019. According to World Bank statistics for 2020, the national income per capita in Belarus was almost double that of Ukraine ($6,280 vs. $3,370 per capita). In Ukraine, however, the oligarchs have multiplied. These are billionaires and millionaires, who deposit their hundreds of millions of dollars of profit offshore or spend them on parasitical consumption.

The Belarusians know this and see it themselves. That is why 80% of an 84% turnout voted for the incumbent President. And then, suddenly, the completely unknown housewife Sviatlana Tsikhanouskaya, who received 10% of the votes, declared herself the winner! There is no evidence for this, but the West is vehemently supporting her!

The explanation is simple: the U.S. and EU governments decided to dump Lukashenka and hand power to their puppet, in order to loot Belarus, force its people to their knees, and turn them into enemies of Russia. And as soon as Belarus is in the grip of NATO, its land, banks, factories, and infrastructure (just look at Ukraine) will be in the hands of foreign masters.

Just as in Ukraine, the engine of slander against Lukashenka, and throughout this “white revolution” in Belarus, is the Nazis. They have been trained, prepared, and generously financed by the West (the West has spent $6 billion on supporting the opposition), so that the Nazis have sprinkled their metastases throughout society. They are not yet visible. So far, you see women in white kerchiefs, with white flowers, peaceful demonstrations, songs, and performances.

We have already been through this. There are different nuances, but it’s the same hybrid war. Under the sheep’s clothing are concealed the fangs of a wolf, who uses slogans about concern for the Belarusian language to sow Russophobia and hatred of everything Russian. Using a slogan about national memory, they are preparing to rewrite history, making collaborationists into heroes, and trampling over the deeds of our fathers and grandfathers who defeated fascism.

A Miracle To Prevent Armageddon

In that case, the fate of Ukraine awaits Belarus. Ukraine lost its ties with Russia, agreed to be the handmaid of the West and cannon fodder for NATO, and thus completely lost its sovereignty and is inexorably moving towards catastrophe. And it will drag the European community, at minimum, into the maelstrom of its problems.

After the orchestration of two revolutions, in 2004 and 2014, Ukraine has become a place of civil war, a destroyed economy, and the most destitute population in Europe. It is a country where Hitler’s henchmen have been rehabilitated and made into heroes; where Nazi bands rampage in the streets (under the protection of law enforcement); and where journalists and politicians are beaten or killed, and people are burned alive for political reasons (as happened in Odessa on May 2, 2014). Nobody is investigating any of this; nobody is punishing the culprits. Ukraine has essentially been transformed into a Nazi state, aimed towards war with Russia.

Today the same kind of coup, with the same goals, is being carried out in Belarus. Armenia and Kazakhstan will be next. The policy of the West, led by the U.S.A., is to drag the former republics of the U.S.S.R. into NATO, using fascist and nationalist parties and movements to do this.

Beyond any doubt, all this deepens the irreconcilable contradictions, increasing the threat of a Third World War. The American film “Armageddon” concluded:

In order to prevent a catastrophe, what’s needed is a miracle, or the joint efforts of the best of the best, together with the all the technological power created by mankind.

I think that our conference should initiate a Committee for the Salvation of World Civilization. I believe that Helga Zepp-LaRouche is the person worthy to head it up. And then we shall make our contribution to preventing Armageddon and saving humanity.