Law Enforcement and the CommunityMust Come Together To Survive This Pandemic

This is the edited transcription of pre-recorded remarks, presented in the Schiller Institute conference on September 6. Mr. Frazier is a former police chief of Tuskegee, Alabama. Subheads have been added. 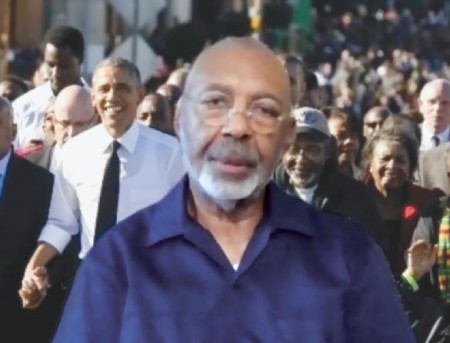 Schiller Institute
Chief Leon Frazier in front of a photo of the 50th anniversary remembrance of the “Bloody Sunday” march over the Edmund Pettus Bridge, Selma, Alabama. Amelia Robinson, not shown, is behind Chief Frazier.

The one thing I would like to make clear: I’m Leon H.E. Frazier—Chief, because I’ve been in law enforcement for many moons and I retired as a police chief.

That job gave me a lot of knowledge, and it’s compounded my love for this nation. I love my people because of my grandmother and my mother, and all the other beautiful people who helped to make me who I am. And I love police, because if there were no police, as unlawful as my community is today with police, we would be on a slippery slope to chaos in this whole nation.

And so therefore, any time I’m confronted with anything, I always look at it from a law enforcement perspective, which means protection and service for real. And I look at it from a humanistic perspective, to say that this “me, myself, and I” perception that most of us have, has worked us into the mess that we’re in now, and if we don’t get up out of it, and start unifying, and thinking about “we” and being concerned about our sisters and brothers—and they’re not all black—then we are going to be forever be in a rut. It doesn’t matter whether you have a PhD degree, a Master’s degree, a BS degree, or no degree, we are all discombobulated, confused, and don’t have a clue as to what the next move ought to be.

But even more important, isn’t this the time the citizens ought to care about the police?

So, you see, we’re expecting too much from law enforcement, when we’re just too immoral ourselves. We lie, we steal, we kill, we take, and we do all of those other things that are not good in God’s eyesight. And, we expect then, though, the police to be perfect! “They are trained to be this or that.” No. I was never trained to let somebody spit on me and hit me upside my head and I should tolerate it. I was never trained, in all the 40-plus years that I was in law enforcement, to let somebody abuse me! So, now, I don’t expect no police officer to take abuse from no citizen, I don’t care whose son and daughter it is. But, by the same token, I don’t expect and accept no police officer to abuse and misuse nobody, I don’t care what their status of life.

Matter of fact, Brother Scott called me, and we were talking, and Brother Scott said, “I’m worried about these people over here that’s having parties and acting like nothing’s going on!”

Reaching Out to the Community

“Right away,” I thought, “well, just be a matter of time before law enforcement is going to have to go in there and do something to try to save these people from themselves. So, do we do nothing? No. ’Cause Scott wouldn’t respect me no more, being as old as I am, I’ve got to do something. So what do you do?

Well, you use your talent, in law enforcement, your love for law enforcement, and you gather all of these guys together: police chiefs, sheriffs, etc. And then, you reach out to the community, to all of the leaders—quote/unquote on “leaders”—and you say, “Look, we’ve got to do something. We’ve got to generate a sense of respect and a sense of support, and a sense of safety among the people in the community. Because if the police have to go there three weeks from now, six weeks from now, and start arresting people, we’re going to have riots! ‘What you comin’ here for? You can’t tell me....’ ”

But, if we can get the government—that was utility boards, mayor of the city, and sheriff’s department—and all of the other powerful people in the community, to come together, put together a document that represents the whole government, then use police officers, now—right now—before we start panicking, and have them go door to door and circulate these to the people. We’ve got 5,000 printed. We’ve got about 4,000 distributed. And not only did we go with law enforcement, but we blended law enforcement with community organization! So now you see a unified effort.

So now, when we go to Miss Crocket’s house, or Miss Rogers’ house or Mr. Henderson’s house, now, three weeks early, if they have to be arrested because of a major party later on, the police officer would have to do the arresting, but could they blame the police for not caring nothing about them, and just trying to play police and law enforcement? No. We have to realize, because we could tell them, “Remember, four weeks ago, when we came by your house, and we gave you this document? It pointed out the city ordinance, it pointed out safety tips, it pointed out the state rules and regulations, it explained every aspect of what we were up against, to the best of our ability—you remember that day?”

“Yeah, I remember you came by, then.”

“Yeah, well shut up, then, because you should have paid attention. The Governor told you, other people in federal government told, your pastors told you ’cause they stopped doing church and told you to go home and protect yourself.”

So now, you couldn’t declare that the government didn’t care anything about the people, because the front running force of the government, law enforcement, was right there, saying, “People be careful. People be willing to understand something different. And people please take care of yourselves.”

A Note from Dennis Speed

Our speaker takes us back to Tuskegee, and Amelia Boynton Robinson, and revolutionary, creative nonviolent direct action.

Tuskegee, Alabama is primarily known because of the Tuskegee Institute, now Tuskegee University, founded by Booker T. Washington in 1881. It was also the home of the Vice President of the Schiller Institute, Amelia Boynton Robinson.

When you talk about that institution, you talk about the idea of “pulling oneself up by your own bootstraps.” Sometimes that’s misunderstood, in terms of how it’s supposed to work. We had a kind of round table discussion with the former Mayor, Lucenia Dunn, the first Black woman mayor of Tuskegee; city councilwoman Norma Jackson; and Scott Muhammad, from whom we found out about this entire project.

Chief Frazier took care of Amelia Boynton Robinson at the end of her life. She died five years ago, in 2015, at the age of 104.