These are the remarks of Rep. Jim Evans that were presented to the Schiller Institute conference on September 6. Mr. Evans was a Mississippi State Representative for 25 years. 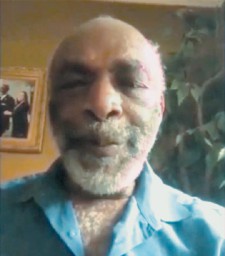 I was the community engagement coordinator for the AFL-CIO; a member of the House of Representatives; President of the Jackson Advocate; President of the Southern Christian Leadership Conference; and finally President of the Immigrants Rights Alliance and others. I began to retire from all of those, but I can’t retire from the Mississippi Immigrants Rights Alliance, because the abuse that they’re receiving is too great for me to leave in good conscience. I can’t retire till we do something about the maddening, sickening, disgusting, inhumane immigration situation we have in America. It is absolutely atrocious.

Dr. Robert Smith was the Civil Rights doctor who, when folks got beat in the head, cut, kicked around, and left for dead, he was the person that brought you back to health and he always did it for folks in the movement free of charge.

He’s still the doctor for Tougaloo College and Jackson State University, and he runs the healthcare center here in Mississippi which is now part of the Merit Healthcare Center. But Dr. Robert Smith is, really, we call him “Black Moses.” He is the number one person. He does more to deal with the disparities of healthcare in Mississippi than anybody that’s ever been here. So, all of his life, his whole practice, has been part of it. He was tending the wounds of Medgar Evers back in the early ’60s and all the folks around him. He’s been part of it all his life. He’s there still practicing medicine and making house calls.

The last report that I did in the last … you said 20 or 30 years, but I’m going to tell you in the last 5 years. I did this report 5 years ago, in which I laid out how many hospitals were closed down, and where they would be, because we were not expanding Medicare. The hospitals have to provide indigent care, and there was no way for them to get paid for it. I predicted that 23 hospitals in strategic areas would close down. All of them have been closed. We’ve had other similar closings. It’s not uncommon to be in Mississippi and drive 40 miles for an emergency room visit and when you get there, you find out that your hospital is closed. We’ve had people that have died in transport. Healthcare in Mississippi has deteriorated to the levels of the ’40s.