Nurses With a Global Perspective

This is the edited transcription of remarks by Shirley Evers-Manly to the Schiller Institute Conference on September 6. Dr. Manley is the interim dean of Alcorn State University’s School of Nursing in Mississippi, and is a member of the Board of Directors of the National Black Nurses Association. 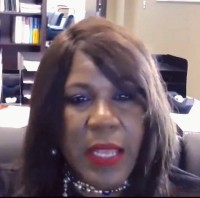 We started, when I was at the University of California, San Francisco (UCSF), we actually had a global health program, so we worked with a variety of nursing schools throughout the world, from Africa, to Asia, to Europe. When I left UCSF and became the Dean at Charles R. Drew University of Medicine and Science in Los Angeles, we actually made a program in global health nursing. In that program, the students were able to learn about not only areas here and health disparities here in the United States, but also learn about global healthcare problems and health disparities in other countries.

We selected areas to go, based on what type of crises were happening in the country at that particular year. We have gone to the Philippines because of the major hurricane in the Philippines; we’ve gone to Nigeria, we’ve gone to Ghana, Uganda; each Saturday in southern California, there’s a team of nurses, pharmacy students from University of Southern California, and also Charles Drew, that goes over to Tijuana every year and provides screenings for individuals there.

In the United States

Locally, here in the United States, one of our largest programs we provided, was to help the families in Michigan when they had the problem with the water in Flint, Michigan. We were able to donate over 10,000 bottles of water to individuals who were working with babies, because the babies can’t be bathed in the water, because the contamination would leach into the babies. So we provided diapers and baby wipes for that.

And when you’re looking at some of the data about Mississippi, they compare it to Namibia. I’ve been in Namibia, and I said, the terrain is very much like Namibia! The difference is that there’s several more people that live in those areas. So when you have a rural area and your workforce cannot meet the demand, it becomes a problem. So we have to look at nurses, frontline workers, physicians, physician’s assistants, nurse practitioners, and go down to the level where we can work with the community health outreach workers who are trusted by the community. They know the community, they know where people are, they know that there’s a homeless population, they know that they live under the bridge, or wherever they may be. So we work with those individuals so we can be able to provide healthcare services to them as well.