One Belt, One Road: A Project for the 21st Century

This is the edited transcription of the opening remarks by Marcelo Muñoz to the Schiller Institute conference on September 6. Mr. Muñoz is the founder and President Emeritus of Cátedra China, Spain’s leading thinktank on China and the New Silk Road, as well as the dean of Spanish businessmen in China. Subheads have been added. 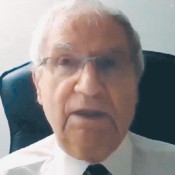 One Belt, One Road (OBOR) is the name that China has given to the project launched in 2013 and has scheduled to complete its first stage in 2049. Because of its extraordinary relevance, we will indicate some of its characteristics.

First, OBOR is a medium- to long-term project, which is something that is not very frequent in our western history, at least not these days when electoral short-termism prevails. In China’s history, on the other hand, it is very frequent. The Great Wall was built over a period of 2,000 years and almost 20 dynasties. The Grand Canal is still today, 14 centuries after it was built, the longest artificial canal in the world. And, in modern times, the Three Gorges Dam, or the South-North Water transfer project, which starts in the Himalayas and has three canals, each of which is 1,000 km long—the last of which will be inaugurated in 2050! That’s what thinking in the medium- to long-term means.

It is one of the basic characteristics of Confucian philosophy, which pervades all of Chinese civilization: the consideration of earlier generations and of those to come, as the historic continuity of the human person in society. The successive dynasties and the current Chinese government have governed from that Confucian perspective—governing for the next generations. This project has that scope: It penetrates into the entire 21st century, as we shall see.

Second, OBOR is the project of the re-emergence of China. Yes, China is re-emerging as an indispensable power. Because it was already the first economic and technological power for 2,000 years, as the detailed studies of A. Maddison and J. Needham show. And now it is returning to the international concert (or dis-concert) of powers, and it is coming back to stay.

This project aspires to be the expression of the weight of China in the current world, without aggressiveness or impositions: a project which is open to all countries that voluntarily wish to join or participate, at any level. In fact, there are already more than 130 countries that have signed agreements to join, among them various in the European Union, with the widespread hope that the European Union itself will sign on, despite the strong pressures from the Trump administration against that. Neither the U.S., nor Japan, nor India have joined. But the project continues: In fact, in only 7 years of being in operation, some 6 trillion dollars have already been invested in various endeavors.

Third, OBOR is the New Silk Road project. The historic Silk Road was, for over 1,600 years, the most traveled trade route for people and goods in the known world, with 15,000 km of land routes and some 20,000 km of maritime routes—to all of Asia, India, Arabia, Persia, Afghanistan, Baghdad, Damascus, Byzantium, to all of Europe, West Africa, Indonesia. We can say, analogously, that it was a “global” trade route for 16 centuries—from the 2nd century BC until the 14th century. So much so, that the Middle Kingdom was, throughout those eras, the kingdom with the greatest volume of international trade. A curious fact: In the year 75 B.C., Julius Caesar appeared at the Roman Theater dressed in a tunic made from silk that had come from China.

OBOR Is the New Silk Road

But it was not only a trade route; it was also a cultural route. Throughout those centuries, different cultures, philosophies, religions and traditions traveled along its routes, as is shown in the mosaic of 56 ethnic groups that remained in China.

The New Silk Road re-emerges with all the economic, technological, cultural, and global potential that the 21st century offers.

Its goal is total connectivity among nations and blocs. First of all, the connectivity of land and maritime routes, but also digital connectivity, cultural, energy, economic, political, and environmental connectivity. In other words, China is offering all of its emerging potential for collaboration, co-investment and dialogue with all countries and blocs, without confrontation or imposition.

With regard to land, maritime and port connectivity, more than 50 projects and corridors have either been begun or are operational in China-Asia-Russia-Europe, with Southeast Asia, in Latin America and Africa—some making use of existing systems—and a multitude of maritime routes in all of the world’s seas. In the medium term, there are plans—although not yet project designs—for a tunnel beneath the Bering Strait, which would connect the entire Asian land network with the Pan-American network; a tunnel under the Gibraltar Strait which would connect the European and the African networks; and a number of other tunnels under the sea.

Digital connectivity has only begun, with various partial agreements between countries. Its potential is based on the development of the 5G wireless network, which has been very much slowed down by the opposition of the Trump Administration; on quantum information that China is developing; and on China’s powerful social networks.

Cultural connectivity is also on the march among governments, institutions and universities, as is economic, environmental and energy connectivity with bilateral and regional agreements.

Political connectivity is based on agreements with ASEAN [Association of Southeast Asian Nations], the SCO [Shanghai Cooperation Organization], the China-Africa Forum, summits with the European Union, and dozens of other multilateral institutions.

And the entire program is being made viable with financing from some 20 big international banks and funds, whose assets exceed $15 trillion. Not to mention that the disbursements already made to date in concrete projects underway is over $6 trillion.

Fourth, OBOR is the project that expresses China’s global presence. China has reemerged as a global power: It has “returned” to stay, in a solid and stable manner, in the international concert, and it wants to do so in harmony, in collaboration with all—open to understanding and dialogue, and doing so by setting in motion this macro-project of global connectivity in all fields, with all countries, peoples and blocs which accept it.

This program, this project, this approach is far from the image that is being transmitted of a China that intends to seize hegemony from others. China—and I have heard this hundreds of times from its politicians—does not aspire to be a super-power, nor is it interested in replacing any other power. It does want, and it aspires to participate in possible global governance, to the degree called for by its current and future position in the real world of the 21st century. That is the meaning and the goal of the entire OBOR, or New Silk Road project. Thank you very much.