Bolivians Reverse Ukraine-Style Coup, Look to the Future with Hope 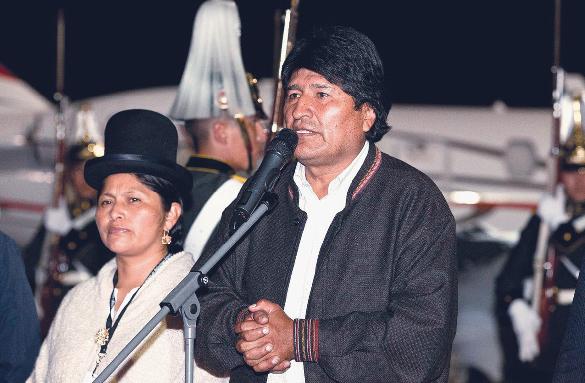 Cancillería Ecuador/Fernanda LeMarie
Bolivian President Evo Morales arrives in Quito, Ecuador for a visit, in 2013. On November 11, 2019, he fled in secret from a foreign-orchestrated “color revolution.” He has just returned with fanfare to Bolivia after ten months as a political refugee in Argentina.

Nov. 15—On November 9, 2020, the northern Argentine town of La Quiaca, on the border with Bolivia, was the site of an emotional binational ceremony in which Argentine President Alberto Fernández bid farewell to Evo Morales, the former Bolivian president who was happily returning home. Morales had been ousted in a November 11, 2019 foreign-orchestrated, Ukraine-style “color revolution” and had lived as a refugee in Argentina for the past ten months, following a brief stay in Mexico in November and December 2019. Following the stunning electoral victory of Luis Arce and David Choquehuanca in Bolivia’s October 18 presidential elections, which put Morales’s Movement Toward Socialism (MAS) party back into power with 55.10% of the vote, Morales could now return to his native country after a year of forced exile. 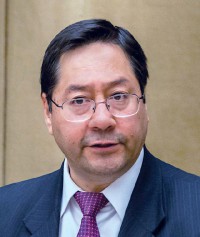 As Fernández accompanied Morales across the international bridge that connects La Quiaca with the Bolivian town of Villazón, amidst cheers and the waving of Argentine and Bolivian flags, he told the crowd, “We are here today to ensure that Evo returns to the home from which he should never have left.” A visibly moved Morales expressed his eternal gratitude to Fernández for having saved his life from the coup perpetrators who had intended to kill him, and for welcoming him to Argentina “so I didn’t feel abandoned.”

He recalled that when he had taken refuge in the Bolivian jungle after the coup, prior to being rescued by a Mexican Air Force plane, he had received phone calls from Fernández—at that time Argentina’s president-elect—and Mexican Foreign Minister Marcelo Ebrard, assuring him of their support. This, Morales said, reflected the regional solidarity of the Patria Grande—Ibero-America’s “Great Fatherland.” Even presidents who didn’t necessarily support him, such as Paraguay’s Abdo Benítez, assisted with logistics so that Morales could safely leave the country for Mexico.

‘Patria Grande’ and Beyond

It was that Patria Grande—particularly the alliance between Alberto Fernández and Mexican President Andrés Manuel López Obrador, or AMLO as he is known—that came together to save Morales’s life in 2019. It is mobilized today to ensure that the MAS victory can begin the process of reversing a coup that was supposed to be permanent. Both leaders acted on the basis of defending Bolivia’s sovereignty and the broader principle that no nation has the right to intervene in the internal affairs of another nation. 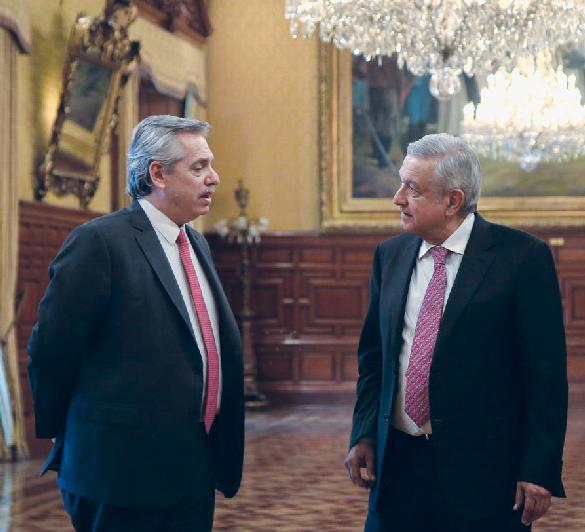 Mexican Presidency
Alberto Fernández, President of Argentina (left), and Andrés Manual López Obrador, President of Mexico, came together to save the life of Evo Morales in 2019, and are mobilized today to reverse the damage done by the coup then.

AMLO has repeatedly pointed out that this is one of the fundamental tenets of Mexico’s foreign policy, recently insisting that that is the reason he has refused to be stampeded into recognizing a Biden-Harris victory while no one is actually certified as the winner according to U.S. law (see “Mexico’s President Stops Stampede to Recognize Biden” in this issue). AMLO also had no qualms about referring to Morales’s ouster as “a coup,” much to the distaste of Secretary of State Mike Pompeo, who insisted that the “authoritarian dictator” Morales had deserved to be removed. Neither AMLO nor Fernández ever recognized Jeanine Añez, the right-wing religious fanatic who was installed by Pompeo et al. to replace Morales.

Russian President Vladimir Putin and Chinese President Xi Jinping, who had worked closely with Morales to transform Bolivia’s economy during Morales’s 2006-2019 presidency, have already stated their intention of working with President Arce and Vice President David Choquehuanca to resume strategic development projects that Añez had canceled. Both presidents had denounced the coup against Morales, calling it a gross violation of national sovereignty.

Advocates of British geopolitical doctrine who orchestrated the 2019 coup are scratching their heads, trying to explain what went wrong. While a compliant military faction had been the public face of that coup, it was actually organized by the “powerful” international Project Democracy apparatus and affiliated NGOs which had successfully carried out similar actions in other countries—most recently the neo-Nazi “Maidan” coup in Ukraine in 2014. Yet the unelected Jeanine Añez they installed in Morales’s place turned out to be a dismal failure—seen skulking away from the presidential palace in embarrassment right after the October 18 election, not showing her face in public after that, while likely facing prosecution for the heinous crimes she and her cronies have committed against the Bolivian people.

Mike Pompeo—who had gushed support for Añez, just as he did for Venezuela’s phony tinpot “president” Juan Guaidó—issued a tight-lipped message to Arce on October 19, congratulating him for winning a “clean” election.

Bolivia’s “Maidan” model enforced its cruel policies with police and military brutality, political persecution of opponents, including former MAS government officials, massacres of the MAS’s indigenous supporters, and vicious austerity. But it failed to break the population’s support for and loyalty to Evo Morales and to Arce, who as finance minister from 2006 to 2017, oversaw the policies of industrialization, directed credit and the application of advanced science and technology which were the hallmarks of the “Bolivian miracle.” This is lawful—just as it is lawful that Morales was welcomed home as a hero by hundreds of thousands of Bolivians from around the country, as he arrived in his traditional home base of Chimoré on November 11. 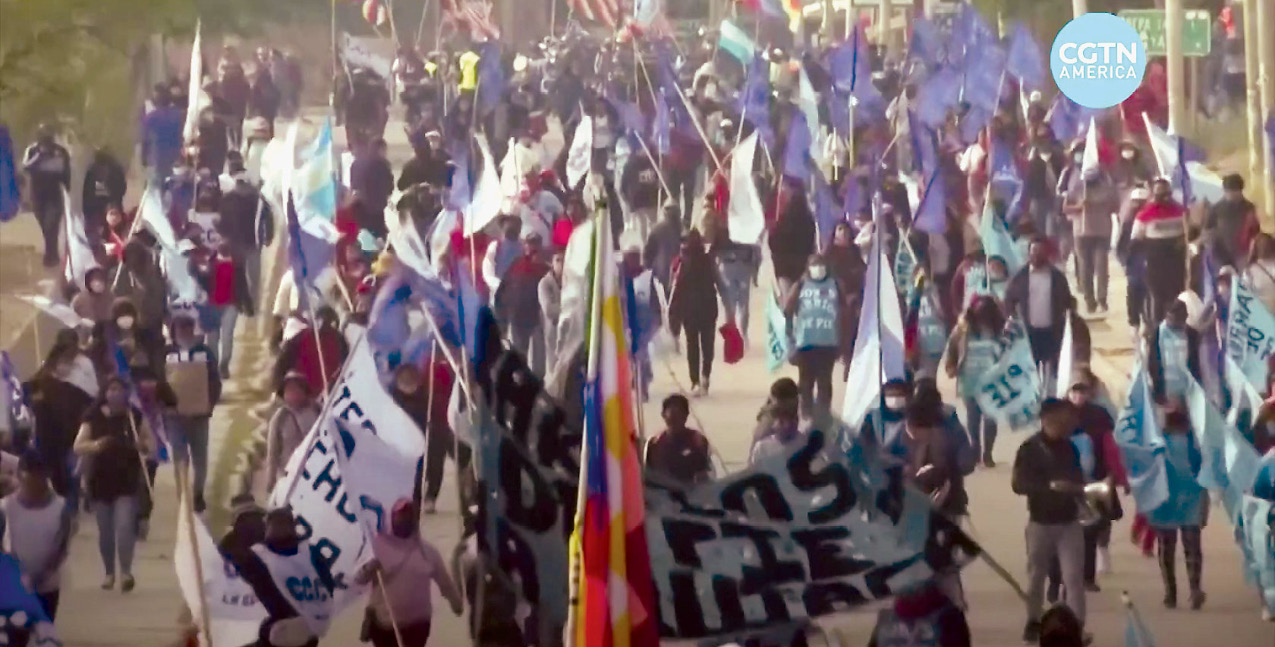 Morales Supported for His Economic Success

As EIR documented in its August 16, 2019 article, “Bolivia Sets its Sights on Fusion Energy and Eliminating Poverty!,” Morales and Arce transformed Bolivia from one of the most impoverished nations in Ibero-America on a par with Honduras in 2005, to a vibrant industrializing economy in 2019. Between 2005 and 2019, the MAS government cut poverty from 38.2% to 15%, achieved a steady 4.3% annual growth rate and greatly expanded jobs and economic opportunity for poorer sectors of the population. The renationalization of Bolivia’s oil and gas deposits in 2006 opened up vast areas for development and industrialization.

Morales worked closely with Russia and China, including joining the Belt and Road Initiative (BRI), and also promoted nuclear energy. He even discussed developing fusion power, always anxious to inspire youth to aspire to goals they were often told were unattainable because of their “Indian” heritage. Russia’s Rusatom Overseas began building a state-of-the-art Nuclear Technology Research and Development Center in the city of El Alto in 2019, and China worked on developing the large Mutún iron ore deposits near the Brazilian border.

As Morales told President Putin during a July 2019 visit to Moscow, “a people with a thousand years of history, with advanced technology is invincible,” in a proud reference to Bolivia’s ancient civilization. “We nationalized, we industrialized, we’ve grown as never before in history, and now is the moment for a great technological leap with the nuclear research center.” He expressed pleasure that Bolivians had become a “sovereign and dignified people.”

With good reason, Morales frequently charged that the coup against him was against “our model” of economic development and industrialization. He has now called on the Bolivian people to protect this model under Arce, and to provide “physical and political protection” to the new President, warning that there are right-wing forces in the country who will seek to destabilize his government. 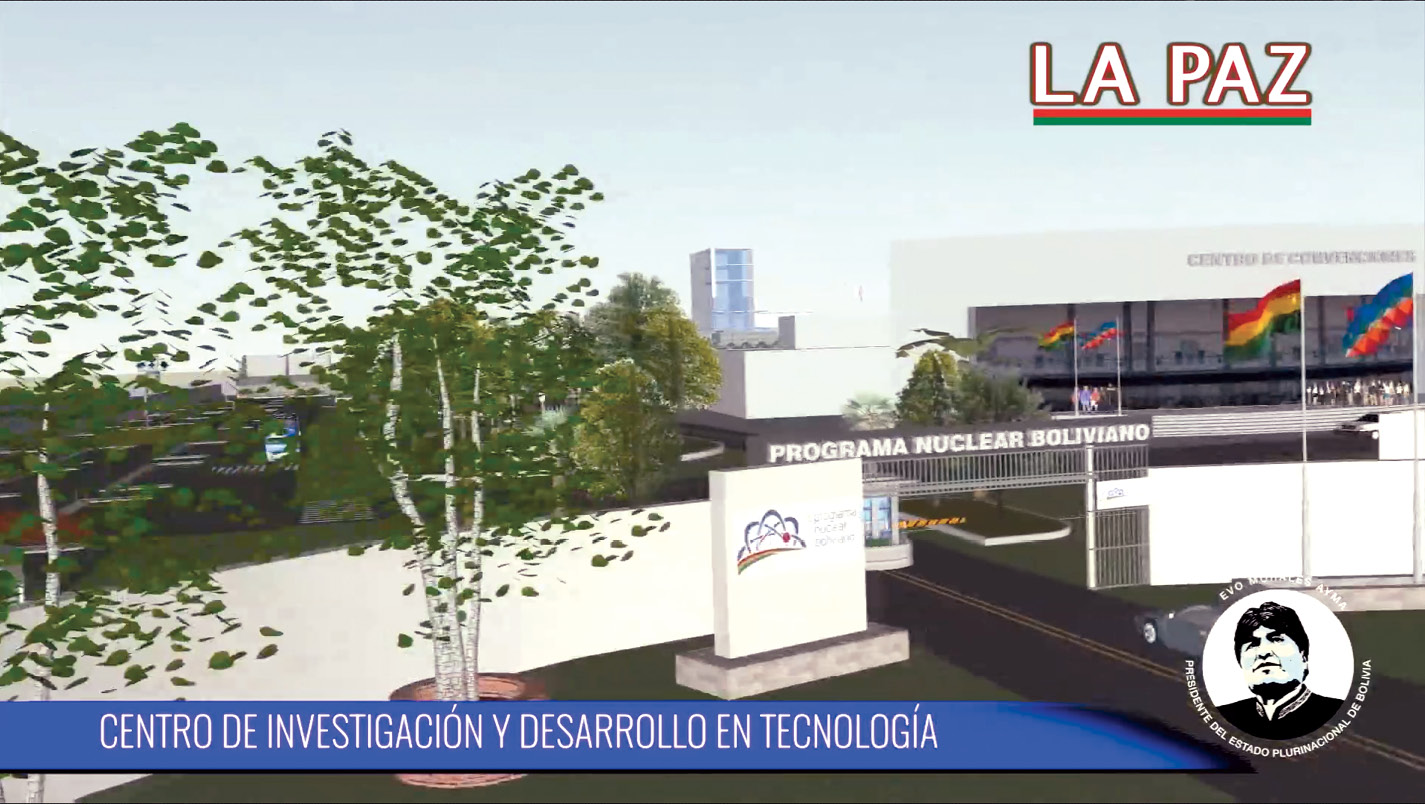 President Arce has vowed to continue industrializing Bolivia and has announced that he intends to work closely with China and Russia, and “go back to the things we were doing together,” prior to the coup, Sputnik News reported October 26. Expressing a desire to meet with President Putin as soon as possible, Arce listed a number of “strategic projects” on which Russia and Bolivia can collaborate, including building a bi-oceanic rail corridor “to unite the Atlantic to the Pacific through Bolivia.” Morales had energetically organized for that project for many years, as Arce noted, but it was dropped altogether after he was ousted. Several other industrialization projects are also on Arce’s agenda.

In his inauguration speech December 8, Arce admitted that rebuilding the nation’s economy won’t be easy, because its “central contents have been mutilated” by the de facto government. In one year, many of the achievements of the Morales government have been erased, he said, leaving behind an additional foreign debt of $4.2 billion, an 11.1% drop in GDP, a soaring fiscal deficit, and vast sectors of the population left to fend for themselves in poverty. This is the worst crisis Bolivia has faced in forty years, he announced.

Nonetheless, he said, “On this November 8, 2020 we begin a new phase of our history. … It won’t be hatred that drives our actions, but rather a passion for justice.” After outlining priority areas that must be addressed to rebuild the economy, he vowed that “our government will be oriented to the present and the future.” Bolivia will work to create a multipolar world, promoting South-South cooperation, and working through such organizations as the Community of Latin American and Caribbean States (CELAC), of which Mexico is currently the president pro tem. Said Arce, “We shall raise the banner of a diplomacy of nations on behalf of life and a world without walls. We must put an end to everything that prevents us from being considered equals, as brothers and sisters.”