Discourse on the Debt, 33 Years On

Lawton is a writer and researcher on African affairs who grew up in KwaZulu-Natal, South Africa. Subheads and embedded links to sources have been added.

Nov. 15—Today, Africa stands at the crossroads. This is the last opportunity for the continent’s leadership to decide the fate of 1.3 billion people.

This is the most crucial moment in Africa’s history. The choice on one hand, is to continue following IMF diktat and agree to a future of economic policy that benefits the banks of Wall Street and the City of London. For that choice there is a bribe which is called the Green Finance Package.

Kenya, sadly, has become the first to accept the UN Green Finance Package, which was received by Kenya’s Central Bank this week. It has chosen to appease the Paris Club and protect its credit rating.

By accepting the Green Bribe, Kenya is committing to a worse than zero-growth policy. The Green New Deal will not fund fossil-fuel or nuclear energy. Without reliable, cheap energy, it is impossible to power development and industrialize an economy. Renewables cannot run a steel mill. Hydropower has its physical limits in terms of recurrence of droughts and transmission distance, and it is not a possibility without considerable water volume.

Does Kenya want to continue relying on tourism and agriculture, a green economy? How will that eliminate poverty?

The Green New Deal puts emphasis on digital infrastructure. What is the point in having network coverage when there is no modern road, rail, bridge, or port along which to transport your goods?

The alternative is the only choice that will end poverty and propel African economies into a prosperous future. That choice is to re-invest historical debt into the physical economy. 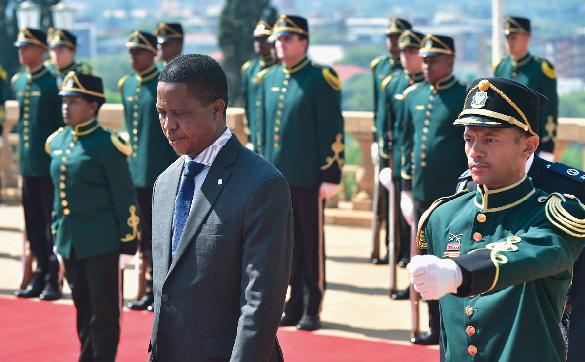 GCIS
“Ignore the misleading headlines that malign our relationship with China by mischaracterizing our economic cooperation to mean colonialism.” Edgar Lungu, President of Zambia, shown on a state visit to South Africa, in Pretoria, December 8, 2016.

This week Zambia became the first African state to default on its international debt since the start of the COVID pandemic.

Zambia’s debt situation is being politicized in ugly attempts at discrediting President Lungu`s progressive economic policy and strong friendship with China. The politicization is also aimed at China, which is still being blamed for creating debt traps and debt-book diplomacy even though this kind of anti-China propaganda has now itself been discredited.

Over the last few years, Zambia has had the foresight to invest heavily in physical infrastructure. This has been largely financed by China’s Development Bank as part of the Belt and Road Initiative.

Zambia’s appeal this week to the Eurobond holders for deferment of payment has been rejected. In contrast, China has already annulled a number of loans to African governments, including Zambia, and deferred payment on others since COVID-19 triggered further economic difficulty. Some Chinese loans will become interest free. In 2018, at the historic Forum for China-Africa Cooperation (FOCAC) in Beijing, Zambia secured a $30 million interest-free loan and a $30 million grant from China. 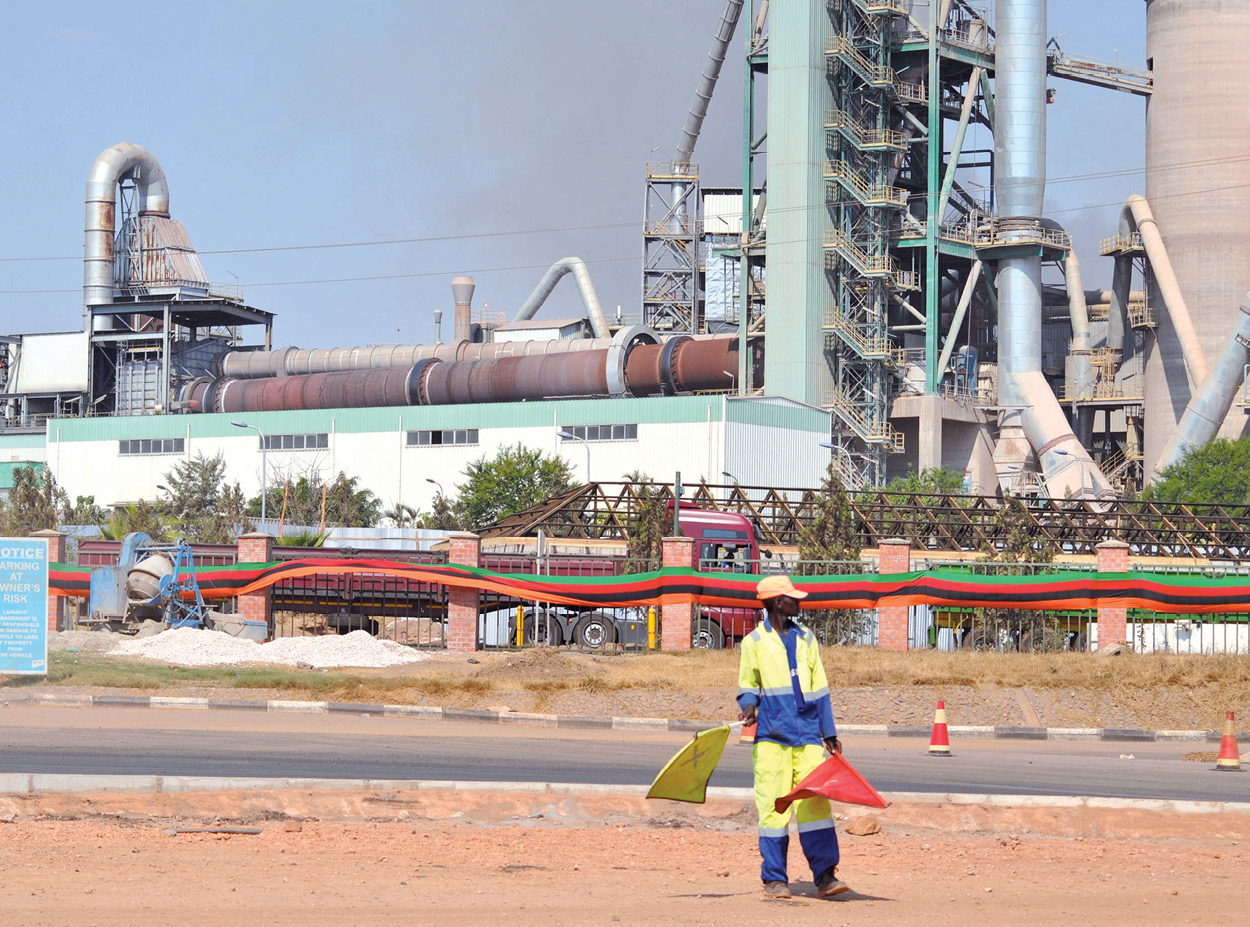 cc/Thatlowdownwoman
Over the last ten years, Zambia has invested heavily in physical infrastructure. Shown, a cement factory in Zambia.

Ongoing attacks on President Lungu’s government have come from foreign-funded anti-China campaigns. The President has responded to critics and said:

I implore you to ignore the misleading headlines that seek to malign our relationship with China by mischaracterizing our economic cooperation to mean colonialism.

Leading Zambian economist and head of Zambia’s Private Sector Development Association, Yosuf Dodia, said that Chinese investment should be seen as an opportunity, not a burden: “Zambia has been dominated by the West for 100 years … and we are seeing poverty all over the continent.”

That is the general consensus of African governments who defend the Chinese model. Compared to other creditors (like the IMF), Chinese banks offer far better terms. The interest is in some cases non-existent or else at very low rates. There are lengthy grace periods before payments commence and much longer re-payment periods. And unlike Western banks, the Chinese banks are lending—extending credit for the express purposes of uplifting the standard of living of African nations.

China’s Exim Bank is extending credit for infrastructure mega-projects, for development of goods and services. That’s exactly what a bank is supposed to exist for—the extension of credit for projects that will create progress and the upliftment of a nation`s standard of living. And it is exactly what the City of London-Wall Street banking empire does not do. 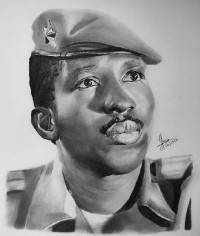 It is 33 years since Thomas Sankara, president of Burkina Faso, called upon Africa’s leadership to renounce the continent’s debt. In a speech given on July 29,1987 at the Organization of African Unity (OAU) Summit in Addis Ababa, he said this:

We think that debt must be seen from the standpoint of its origins. Debt’s origins come from colonialism’s origins. Those who lend us money are those who colonized us before. They are those who used to manage our states and economies. Colonizers are those who indebted Africa through their brothers and cousins who were the lenders. We are strangers to this debt. Therefore we cannot pay for it. Debt is neo-colonialism in which the colonizers transform themselves into “technical assistants.” In fact it is better to say, “technical assassins.”

Under its current form, the debt is a formula for controlled imperialism; debt is a cleverly managed re-conquest of Africa aiming at subjugating its growth and development through foreign rules. Thus each one of us becomes the financial slave, that is to say—a true slave to those who were treacherous enough to put money in our countries with obligations for us to repay. We are told to repay, but it is not a moral issue. It is not about this so-called honor of repaying or not!

Debt servicing and restrictive loans for poor countries, in these current times, is more than immoral!

In an October 20, 2020 press release, “IMF Paves Way for New Era of Austerity Post-Covid-19,” Oxfam International reports on a new Oxfam analysis according to which:

84% of the International Monetary Fund’s Covid-19 loans encourage, and in some cases require, poor countries hard hit by the economic fallout from the pandemic to adopt more tough austerity measures in the aftermath of the health crisis.

The new analysis finds that 76 out of the 90 IMF loans negotiated with 81 countries since March 2020—when the pandemic was declared—push for belt-tightening that could result in deep cuts to public healthcare systems and pension schemes, wage freezes and cuts for public sector workers such as doctors, nurses and teachers, and unemployment benefits, like sick pay.

Africa’s debt to the IMF is a creation of a neo-liberal economic system of so-called Free Trade that has deliberately withheld industrialization from African economies. The debt should have been renounced in 1987. But it wasn’t. Instead Thomas Sankara was assassinated for what he said.

Today the situation has changed. Africa’s debt burden to the IMF remains immoral. Debt servicing across the continent has taken precedence over health, over food to the hungry, over education, over everything that matters. If debt is to be seen from the standpoint of its origins, then we need to look at debt which has its origins in the Belt and Road Initiative. That is debt owed to China since the beginning of the Belt and Road Initiative in 2013 to construct infrastructure and build economic corridors.

The G20 announced its Debt Service Suspension Initiative in April this year. This is a non-binding agreement, but pressure is being put on China to join the Paris Club of creditors.

This initiative is an attack on China. The intention is to derail the Belt and Road Initiative. China, which only accounts for 17% of Africa’s debt, is not liable to pay for the decades of the IMF`s economic assassination.

The African Continental Free Trade Agreement (AfCFTA) will not create prosperity without massive infrastructure development. Without transport networks, AfCFTA is like a body without arteries and veins. 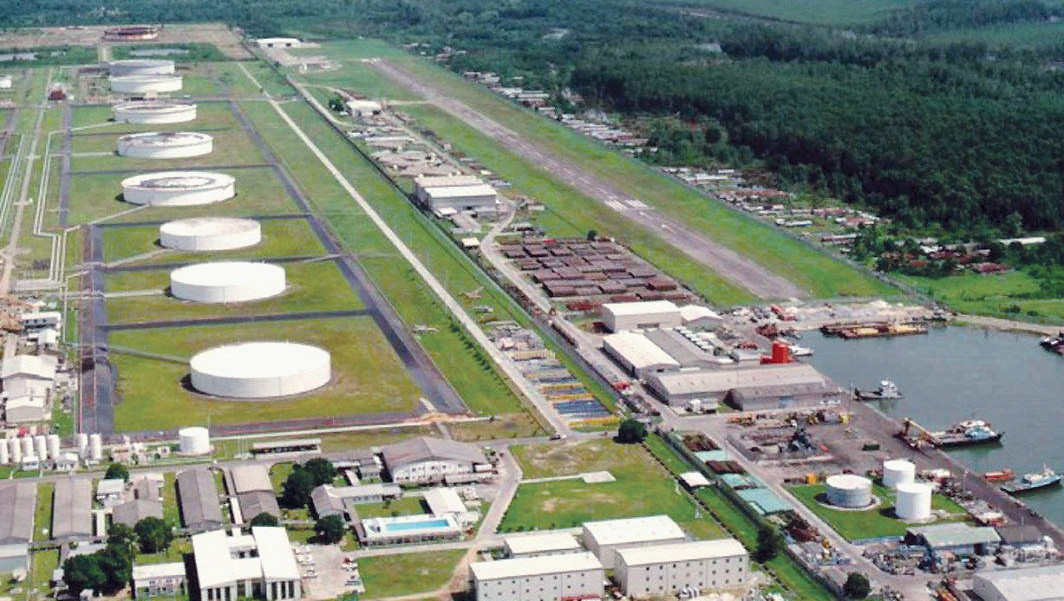 Nta.ng
Manufacturing and processing of goods on African soil is a priority in Nigeria. Shown, the Escravos Tank Farm at the Escravos Terminal, a crude oil and LPG export facility.

Aliko Dangote of the Dangote Group and financer of a major Nigerian oil refinery has said that infrastructure is more important right now than any trade agreements, and that manufacturing and processing of goods on African soil has to become a priority, but for that, infrastructure once again takes precedence.

Lawrence Freeman, an Africa analyst, explains the importance of infrastructure:

What African nations most desperately need, and which will have the greatest impact on their economies, is infrastructure, infrastructure, and more infrastructure. It is not hyperbole to state that the lack of infrastructure is responsible for millions of deaths on the continent. The dearth of on-grid energy, arguably the most crucial component of an industrialized-manufacturing society, is preventing African nations from attaining the levels of economic growth required to sustain their populations.

In October, seven African parliaments called for the continent’s debt to be annulled. The Speaker of the Nigerian House of Representatives, Rep. Femi Gbajabiamila, has initiated the Conference of Speakers and Heads of African Parliaments (CoSAP), which is the body that is launching the African debt write-off campaign. The seven countries represented are Nigeria, Ghana, Ethiopia, Kenya, Rwanda, Senegal, and South Africa. Algeria, Morocco, Côte d’Ivoire, and Cape Verde have also expressed their desire to join. 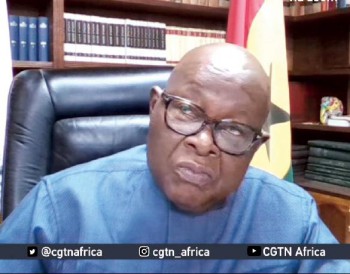 Professor Aaron Oquaye, Ghana’s Speaker of Parliament, recently gave an interview with CGTN in which he called for “a New Paradigm”:

A New Paradigm cannot take place under the present world [economic] arrangement. [Debt servicing was a game of] “robbing Peter, to pay Paul,” [creating a never ending] cycle of poverty, misery and disease. Debt cancellation is a matter of liberating us.

In other words, it is a final end to colonialism. Oquaye continued:

In order, even, to maximize our raw resources, we need a new world economic order. How do we balance processing? For example, taking our foods, vegetables and also fruits, processing them in competition against foreign cheap products? No country, ever, in this world, you know, got economic self-dependency by allowing cheap competition.

Professor Oquaye is not advocating a totally isolationist policy, but a policy against the utterly unfair advantage of the mega-corporations that have been the only beneficiaries of the financial elite’s “globalism.”

Africa’s leaders must unite to demand that all debt which has been accrued for anything except constructing infrastructure, which includes health care and water sanitation, will no longer be paid. Payments will instead be re-invested in the physical economy for the benefit of all.

The Dangerous Fraud of the ‘Great Reset’

Building the physical economy of Central Africa must begin with international financing of the Transaqua project. Construction of the world`s largest engineering project will require a change of heart, will, and motivation from the privately owned central banks. In fact, it will require that the banking order be replaced by a new Bretton Woods system which extends credit for mankind, not for money. Those that gave Africa economic assassins want to fool us again with their phony version of a New Bretton Woods, under their Great Reset, which is worse than a zero-growth policy. In terms of Africa, it is to kill the African Dream.

Stop greening the debt, stop politicizing the debt. Review the debt and, where applicable, re-invest into the physical economy.