Leah Hoopes is a GOP Committeewoman in Bethel Township, Pennsylvania. 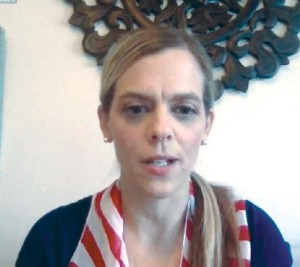 Hi, it’s an honor to be here. I was actually quite shocked to be asked to be on this panel, so thank you very much for having me. This by no means has been an easy thing. I’ve been inundated with phone calls about getting my story out. And quite honestly, my safety is at risk when I talk about these things, which is a very sad place to think about, that that’s where we are in the United States of America, that I have to fear for my safety to talk about the truth.

Just a quick, brief history: I became a committeewoman; I also started a watch-dog group and became involved with the Thomas More Society. We’re just an unincorporated association of concerned citizens who have been paying attention to our newly elected, completely Democratic County Council and Election Board.

From the start of Election Day, at 7 a.m., it was a disgrace—it really was. We had issues with our scanners from the very beginning. One of our scanners didn’t work at all; the other one, it would take four or five times for a ballot to go through. We couldn’t get ahold of our county to rectify the situation, for hours, and then by the time someone came in, it was the voting machine warehouse supervisor, who also happens to be a Bernie Sanders delegate, who is a complete radical, came in, did not rectify the situation, and just told us that the ballots and their bar codes were deformed. An hour goes by and they bring in about 500 more—a stack of new ballots.

That was just the beginning. There was complete confusion. We had our Pennsylvania Supreme Court making election law and extending it for three days; it just caused mass confusion for a very long time.

As to what I saw at the counting center, I had, I guess you would say, recruited some ex-military people to become poll-watchers, and specifically one gentleman who had also testified at the Pennsylvania Senate hearing. He is a data forensic scientist and he was a Naval commander, very experienced in fraud. Once he got to the counting center on Election Night, he called me and said: There is a back room in which there is no observation, and nobody was allowed back there; there was much resistance from the people that were there. When he called me, I had contacted the Thomas More Society in order for us to get a lawyer down there. And what ended up happening was, we got an injunction, and it took about two and a half days to actually get into that back room. Once we got back there—the injunction was actually a joke, to be quite honest, because it allowed five minutes every two hours. We were set 20 feet back; you couldn’t even see a physical ballot. It was like, they were giving crumbs to the peasants. It was atrocious.

What I did see that day, just to give a bit of positivity, is that Republicans and Democrat observers, we were all in agreement that there was something wrong with the fact that we were not allowed back into that room, where pre-canvassing was transpiring. By the time we finally got back there, Greg had gotten into another room; it was a sealed-off room where they were keeping the ballots, and this was two days after Election Night. So, what he had seen was anywhere between, I think it was like 50-70,000 ballots that were unopened, despite that the count had already happened.

There’s a multitude of other issues that had transpired, between missing logs, that they were trying to fill in information two weeks after the election happened; you had V-drives that were missing from the scanners that they were trying to collect; you had absent chain of custody; there was zero transparency, resistance. And then to top it all off, the Attorney General Josh Shapiro sent two special agents to Greg’s house, to my house, and to other observers, completely unannounced, in the middle of the day, it was quite concerning. I didn’t know if I was being investigated as the criminal, or for someone who had already signed an affidavit into what I had witnessed. It was quite intimidating.

Hopefully that kind of clears things up for everybody. It’s been insane, to say the least. I’m quite disgusted at what I witnessed.

Jason Ross: Thank you. And you were one of the people who testified at the hearing in Gettysburg on Wednesday, is that right?

Hoopes: Yes. It was actually quite an honor. This is very surreal to me, all that’s transpiring. But as I said in my testimony, it’s not about party, it’s about my country. And I quoted Rush Limbaugh, and how he speaks about “where are the grassroots efforts?” and I feel like this is a movement and it’s not going to be stopped because the republic is—we’re angry, and we want to fight for our country. And you have to fight for what is right. And that’s why I stepped up and that’s why I’m speaking up, and that’s the only way we’re going to get this done. We’re screaming from the rooftops that we’re angry and it’s going to get to the point where we’re going to force them to do something.