Mr. Scavello is a State Senator from Pennsylvania’s 40th Senate District. Earlier he served for more than a decade in the House of Representatives for the 177th Legislative District. He is the Chair of the State Senate Banking and Insurance Committee, serves on many other committees, and is one of the co-sponsors of the Joint Resolution that has been introduced into the State Senate and State House to take back control of the appointment of Electors. 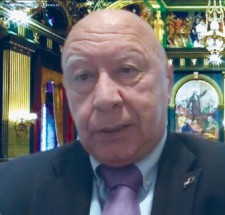 I’m glad to be here. By the way, Leah Hoope’s spot on, what she said. We had numerous testifiers and it was really an eye-opener. But you know, when she said voting machines, I think it’s so important to realize, because this thing was planned: How does a governor decertify every voting machine in the state, and force these machines on every county? When the counties balked about it, what ended up happening was, they didn’t want to pay for them; so, then the governor comes to us, and we said, we don’t have a problem with those machines. So it took—he had to basically borrow money from an account to pay for the machines. And these are machines that in some—and he said that machines had to give a receipt; well, I know many machines, especially in the Southeast, when you vote you get a receipt for exactly what you voted for. These machines don’t give you a receipt!

The other piece is, how does—when Philly finishes, basically when Pittsburgh started? They held off until—Pittsburgh held off until Philly had their numbers, and if you really look at down-ballots, this is the first time since 1956, that the Republicans won the Treasury and won the Auditor General’s race—1956! So, if Biden wins, and the Attorney General wins, by pretty close, about the same margins, what happened to the down-ballot? Were those ballots just two people then put in? I’m assuming that must have happened.

You know, I’m with Doug, and I think we need to get to the bottom of this. And this is just, you know, starting with those machines, you knew there was a problem. Why?—and I believe some other states did the same thing—there was a Democratic governors’ meeting, about a handful, they met with the Speaker of the House and a couple others, out West somewhere, Las Vegas, I’m not sure, over a year ago. And I believe this is where all this started. I hope at some point the FBI, the CIA, somebody needs to investigate this, because they just don’t do everything together, which they have here. And my governor’s been spending a lot of time in Delaware, prior to Biden winning, and now he continues to spend more time in Delaware, ’cause we don’t see him in the state. I have a Wolf-watch on my Facebook: “Where is the governor? He’s not in the capital.”

I’ll gladly take any questions if you have any.