This transcript appears in the January 1, 2021 issue of Executive Intelligence Review.

This is the edited transcript of Mr. Christie’s presentation on Panel 1 of the December 12-13 Schiller Institute conference. Subheads have been added. 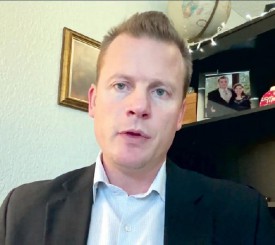 I think what we should recognize is that this is a color revolution, or at least one form of it, and it has been an ongoing color revolution against our country, but other nations as well, particularly those nations that LaRouche identified that would be critical to break the back of the British Empire, the City of London financial crowd, their branch office in Wall Street, and their tentacles into the banking and cartel structures globally. But those four nations of Russia, China, India, and the United States would be absolutely required to break the back of the British system, and now, of course, their planned Great Reset of a central bankers’ dictatorship via digital currency, the Green genocide program—which is absolutely what it is, it’s just genocide of killing people off through denial of critical energy needs, food production. All that will be covered in the course of this conference. Russia Ministry of Defense
Map from the presentation of Gen. Valery Gerasimov, Chief of General Staff of the Armed Forces of the Russian Federation and First Deputy Minister of Defense, Third Moscow Conference on International Security, May 23, 2014. But again, these other nations have been targets of similar color revolution operations that may have their different characters to them. Certainly Hong Kong—we saw what happened there in terms of the street operations, the riots. This is, of course, directed at the leadership of Xi Jinping. The Navalny case against Russia. Then we see the slew of other nations that have worked with these nations around the development of a new system that would move beyond the British system. This is the implementation of the New Silk Road—the Belt and Road Initiative, but as was developed by Lyndon LaRouche and his wife, Helga Zepp-LaRouche. That’s a critical means by which we replace the dying, dead and gone British system before they get their Great Reset in.

So, the nations of the Middle East (Southwest Asia), the nations of northern Africa that would be an integral part of the transit routes into Europe and so on; those nations have been targetted all along, with these color revolution operations. Libya, Syria, Egypt, you’ve seen all the different aspects. The other critical nation was Ukraine. That was perhaps one of the most blatant operations. Then, of course, we have the operation in Belarus right now.

These color revolutions I think it is notable, because number one, those nations actually view this as an act of warfare. The 2014 Third Moscow Conference on International Security essentially discussed color revolutions as a form of warfare, not just simply a hodge-podge of media and social media and non-governmental organizations [NGOs] that just somehow magically achieve a regime-change operation, because of the corruption of whatever leadership they’re attempting to overthrow. They actually viewed this as a concerted, coordinated operation that is akin to warfare in terms of regime change.

So, that’s how those nations view it, which we should just keep in mind. President Vladimir Putin spoke about the operations against Trump from this standpoint at a press conference in Moscow in January of 2017, when Trump was being inaugurated and there were violent street demonstrations.

Putin’s references to this are useful; he said,

In my opinion, there are several goals; some are obvious. The first is to undermine the legitimacy of the elected president of the United States. Incidentally, in this connection I would like to note that—whether people who do it want it or not—they greatly damage U.S. interests. It seems that they trained for this in Kiev, and now are ready to organize a “Maidan” in Washington not to let Trump assume office. The second goal is to tie the hands and legs of the newly-elected president related to the implementation of his pre-election campaign’s promises to the American people and the international community.

Joe Biden was the point man. He probably didn’t do a whole lot; others were carrying it out. Putin’s statement on this is relevant. This is what we’re actually dealing with, and again, as I mentioned, these types of color revolution operations are directed against all nations. A critical component of the color revolutions is the control of information, or really preventing the spread of ideas that are more relevant to this kind of moment. But we’ve seen with the censorship, that’s obviously gone off the rails with the Hunter Biden story, that was, for a lot of Americans, their first eye-opening experience. But now they’re just—any objections to the election theft are just being banned on the internet. This is done through this Section 230; I will read a relevant section of this. Section 230, as Trump is saying, should be repealed; otherwise he will not sign the National Defense Authorization Act, unless there’s a clause to repeal that.

Section 230 is from the 1996 Communication Decency Act, and this gives the so-called sword and shield to these internet platform companies, the big tech, so-called. The shield side is the liability from allowing third party agencies to post and not having to be legally liable for the content. The sword part, there’s sort of an obvious aspect of copyright infringement, sex trafficking, child porn, these different elements that should be cleared off, and they effectively have to do that. But then, what Section 230 and the so-called Good Samaritan clause do is, they go even beyond that to say that “material deemed obscene, lewd, lascivious, filthy, excessively violent, harassing, or otherwise objectionable, whether or not such material is constitutionally protected.” That is in Section 230; they’re basically saying the First Amendment doesn’t exist as long as it’s all done in so-called good faith.

So, this is one of the key aspects that has given these companies the ability to do what we’re seeing in terms of this mass censorship. But this is all part of the architecture embedded in these things, because they were designed from the very get-go for the large-scale social engineering that we are now seeing, and certainly as part of these color revolution operations.

I just want to give a brief background on the field of social network analysis and the people who developed this, called the International Network for Social Network Analysis (INSNA). I wrote a paper, published in EIR, titled “INSNA: ‘Handmaidens of British Colonialism’.” The expression, “handmaidens of colonialism,” comes from Professor Henrika Kuklick, who identified sociologists and anthropologists operating in colonial Africa as the handmaidens of their colonial masters. That they were sent there to profile and identify how the social networks and tribal structures worked, or emerging countries, or nationalist movements that were developing. That this material by these sociologists and anthropologists was fed back to the British Foreign Office and Colonial Office, and the relevant colonial agencies in other countries in order to suppress and subvert and make sure that the colonial policy could continue—the diamond mines and the gold mines and so forth could keep lining the pockets of the British imperial networks. The reason that’s relevant is that the handmaidens of colonialism that she referred to, was a particular agency, the Rhodes-Livingstone Institute in Zambia—Northern Rhodesia at the time, I believe. This was in the 1930s or ’40s, I don’t know when it went out of business; maybe it’s still around in some form or another. Actually, I know it’s around the social network analysis grouping. Members of the Rhodes-Livingstone Institute, like J.A. Barnes, J.C. Mitchell were founders of the social network analysis grouping that I mentioned.

The other relevant point is that these were the intellectual forefathers of this social network analysis crew that developed the tools to exploit social networks, particularly applied to social media, although they have a much broader perspective on social networking in general than just social media.

The other relevant grouping that developed into social network analysis was the group called Sociometry, headed up by Jacob Moreno. Moreno’s sociograms—at least he’s credited with developing them—were part of these profiling operations. You identify the nodes, the people, the connections between them, what that social network looked like as a mathematical model. Today, they have 3-D models that are very vast and capable of figuring out who’s talking to whom, who are the big idea generators, and so on. Some newspaper headlines on the 1938 radio broadcast, “War of the Worlds,” a psychological warfare experiment conducted by the Princeton Radio Research Project.

Sociometry is relevant to look at because they were kind of a nexus point of media, polling, public relations, opinion research, all these different elements. Other notable members of Sociometry included John Dewey and some of the Tavistock crowd—Kurt Lewin, Margaret Mead, Paul Lazarsfeld. And then on the media side was Frank Stanton of CBS, and there was Gallup of Gallup Polls. Lazarsfeld, Frank Stanton, and Gallup were part of the Princeton Radio Research Project. If people remember the “War of the Worlds,” that was broadcast out of this grouping. They had polling operations; there were ways they set up things so viewers could sit home with a dial and have their likes and dislikes during different shows—soap operas and things like that. So, this is kind of the first push at the kind of integration of media, polling, public relations, etc.

That at least will give you a sense of some of the background of some of this social network analysis grouping—where they came from, what direction they were going in. Now, of course, it should be fairly obvious to everybody that they’re profiling people. 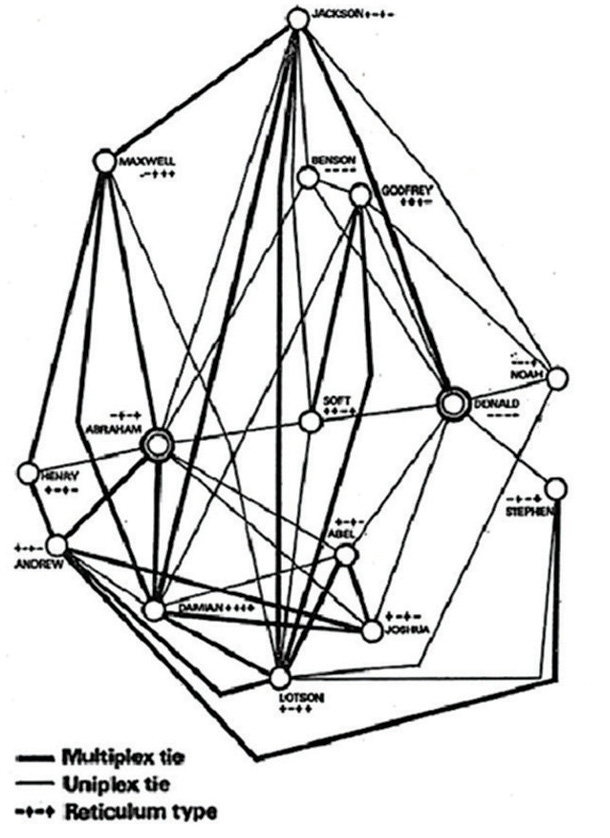 The Mind as a Digital Construct

The other aspect of this is just on the digital construct in general. Just to be aware of this: They viewed the human mind and social relations in terms of the very notion of digital concepts. Of zeroes and ones, of electrical impulses on and off—which is how you create programs. That this was similar to a human existence. We were just passive beings who said yes or no, like or dislike. Seek pleasure, avoid pain—a very animalistic view of human society. But this is how they actually game and create what’s called the Reesian choice, named for John Rawlings Rees of Tavistock. That is, I think, relevant to consider, that when you sit there and do the like or dislike, or send or not send, you’re effectively agreeing to the terms of what the program was that was given to you.

The reason I reference that, is that what is required at this kind of a moment is to say, no, we’re not accepting the terms of these Reesian choices. We’re going to go to the higher poetic conceptions that give the actually competent ideas to deal with the unfolding crisis that we see globally. Certainly, that is the method of Nicholas of Cusa, the Coincidence of Opposites that Helga has been emphatic that we get that kind of dialogue going. That ultimately is the kind of antidote to this sort of large-scale behavior modification, social engineering, that we see from these heirs of Tavistock and these other kinds of agencies.

The critical thing that they developed was the idea of group dynamics—that that was far more effective than the individual brainwashing methods of electroshock therapy, or drugs, or whatever. Group dynamics said, “Don’t you just want to be accepted and be part of the herd?”

So, maybe just to have a sense of that battlefield,— but the higher ideas, the higher poetic conceptions of the Coincidence of Opposites are absolutely required to get people to think outside of what they’ve been programmed with. So, I’ll leave it there, and take up whatever questions people may have in the Q&A period. Thank you.