Jan. 15—Meeting with Azerbaijani President Ilham Aliyev and Armenian Premier Nikol Pashinyan, on January 11, Russian President Vladimir Putin brokered a deal for peace through economic development that aims to consolidate the gains achieved by a ceasefire between Armenia and Azerbaijan over Nagorno-Karabakh. After four hours of talks among the three leaders, Putin told reporters:

We were able to come to an agreement ... on the development of the situation in the region. I mean concrete steps to build economic ties and develop infrastructure projects. For this purpose, a working group will be created which will be headed by the vice-premiers of three governments—Azerbaijan, Armenia and Russia. In the near future, they will create working expert sub-groups, [and] present concrete plans for the development of transport infrastructure and the region’s economy. I am confident that the implementation of these agreements will benefit both the Armenian and Azerbaijani people and, without any doubt, will benefit the region as a whole.

Putin also said that the ceasefire agreement signed November 10, 2020 is being fulfilled with Russian peacekeepers carrying out their designated responsibilities. With this deal and his brokering of the ceasefire, Putin has put the Nagorno-Karabakh conflict on the path to resolution, ending the three decades of a state of war between Azerbaijan and Armenia.

Nagorno-Karabakh, an enclave of ethnic Armenians within Azerbaijan territory and sovereignty, has been a point of conflict since Armenia militarily occupied the enclave and the region between it and Armenia, almost three decades ago. While Azerbaijan was able to recapture the territory around Karabakh, and a small part of Karabakh itself, the status of Karabakh remains to be negotiated.

While both sides refused to compromise in any near-future time frame, Putin has taken a lesson from the late statesman Lyndon LaRouche and has put forward the prospect of broad economic development to be implemented, keeping the current territorial status quo, while negotiations continue. LaRouche had put this perspective forward in the 1970s when he proposed his Oasis Plan for the Middle East peace, and again in 1993 (see the accompanying box on the Oslo Accords), but the parties wanted a “political settlement” before economic cooperation could begin in the 1970s and were thwarted in 1993. The non-economic strategy has only led to multiple wars and creation of the most unstable region on the planet.

The leaders of Armenia and Azerbaijan have accepted Putin’s approach. Aliyev said, “The meeting was very important in order to ensure the further sustainable and safe development of our region. The declaration signed today demonstrates our belief in solving the crisis.” Pointing to the key issue of removing all the previous obstacles that hindered transportation connections in the region, the Azeri President said, “This field [transportation] can accelerate the development of the region and strengthen its security. I am sure that neighboring countries will also actively participate in the creation of transport corridors as well as the creation of an extensive network of transport arteries in our region.”

Aliyev added that the success of the ceasefire deal increases the belief that the Nagorno-Karabakh conflict is over. “As neighbors, we need to think about how we should live together in the neighborhood, how we can raise efforts to unblock the transport arteries and increase regional stability and security in the future,” he said.

For his part, Pashinyan said the joint declaration was very important for the development of Nagorno-Karabakh, the status of which is still under negotiations within the framework of the Organization for Security and Cooperation in Europe (OSCE) Minsk Group:

Implementation of the agreements can change the economic image and appearance of our region, and economic innovations can also lead to more reliable security guarantees; of course, we are ready to work constructively in this direction. But, as I said, unfortunately, it is impossible to resolve all issues during one meeting.

From Cockpit to Key Eurasian Land-Bridge

The Caucasus has served as the British Empire’s cockpit for destabilizing Russia and Central and Southwest Asia for the last two centuries, especially after the fall of the Soviet Union in the 1990s. With his personal intervention into the Nagorno-Karabakh conflict, Putin has neutralized these geopolitical schemes. In the process he has also neutralized Turkey, which was acting as the British cat’s paw by bringing mercenaries and terrorists into the conflict on the pretext of supporting Azerbaijan, seeking to spread the conflict further, into Russia’s North Caucasus. 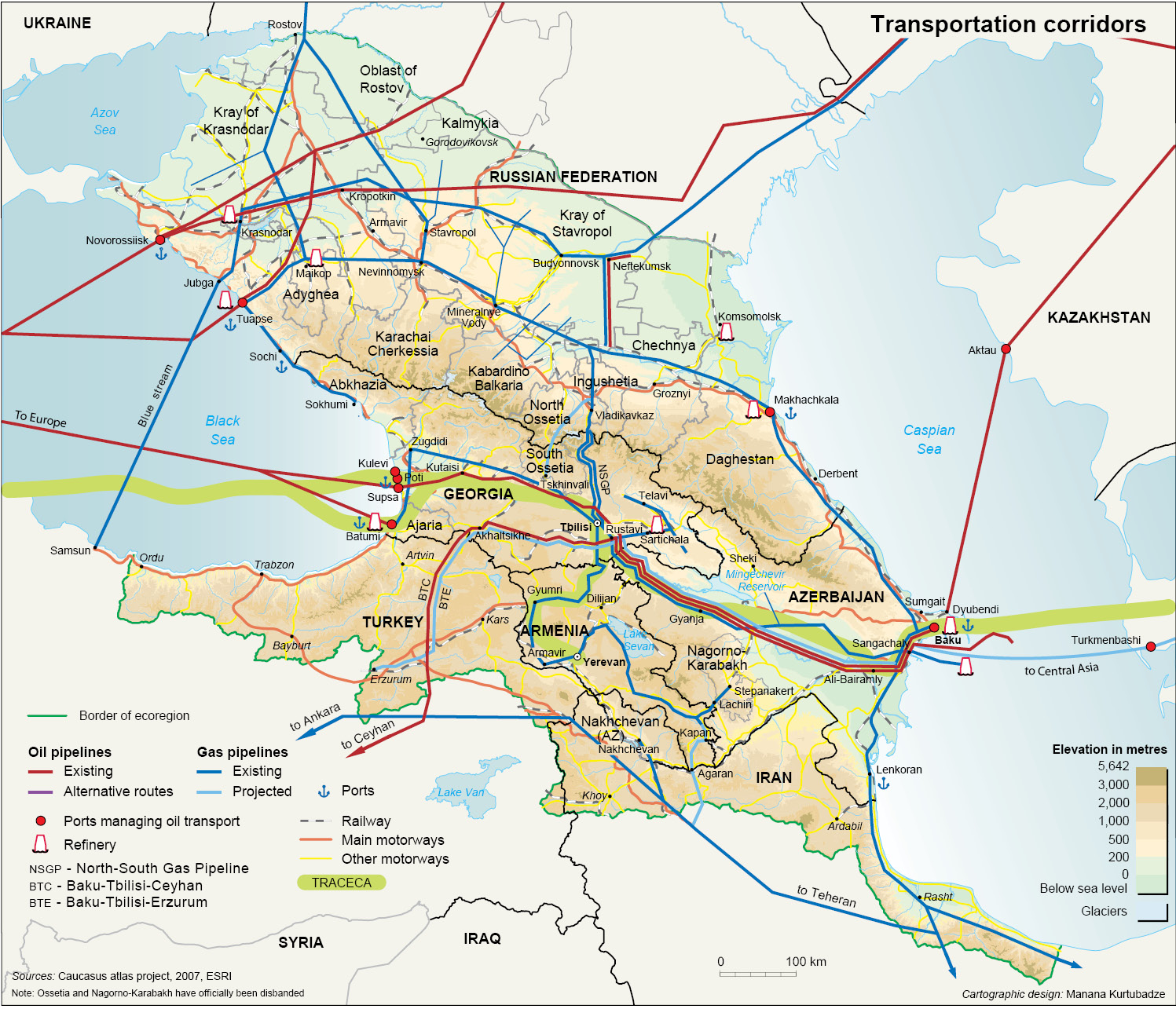 Map 1, Dense Transportation and Energy Infrastructure in the Caucasus Region, shows a region with a dense network of railways, roads, and oil and gas pipelines connecting Eurasia in the north and Southwest Asia to the south. With this agreement, new and very productive possibilities will open for the entire region.

The conflict over Nagorno-Karabakh had cut key transport links for Armenia. It could not utilize the rail line not only through Azerbaijan, but also others through Turkey, which blocked all such transport links in 1993. While the Armenian railways are owned by Russian Railways, their only link with the Russian network was the problematic line through Georgia. To the south, the rail line to Iran passed through the Azerbaijan enclave of Nakhijevan, which lies between Armenia and Turkey, and was blocked during the conflict, leaving Armenia only a road link to Iran. Meanwhile Azerbaijan’s links towards the west were blocked, forcing it to detour to the south through Iran to reach Nakhijevan, and to the north though Georgia to reach Turkey.

All of this is about to change, as Azerbaijan intends to spend $1.3 billion on post-war reconstruction and development. President Aliyev has already announced a nearly $500 million proposal to reconstruct the railway from Baku, west to Meghri in southern Armenia, into the Azeri enclave of Nakhijevan, and then north with one branch heading to the Armenian capital of Yerevan and another northwest to the Turkish railway hub at Kars. The same line will open the connection south to Iran, thus allowing Azerbaijan direct contact with its western enclave and Turkey. And for the first time in three decades, Armenia will be directly on an East-West Silk Road corridor, ending its three decades of isolation. 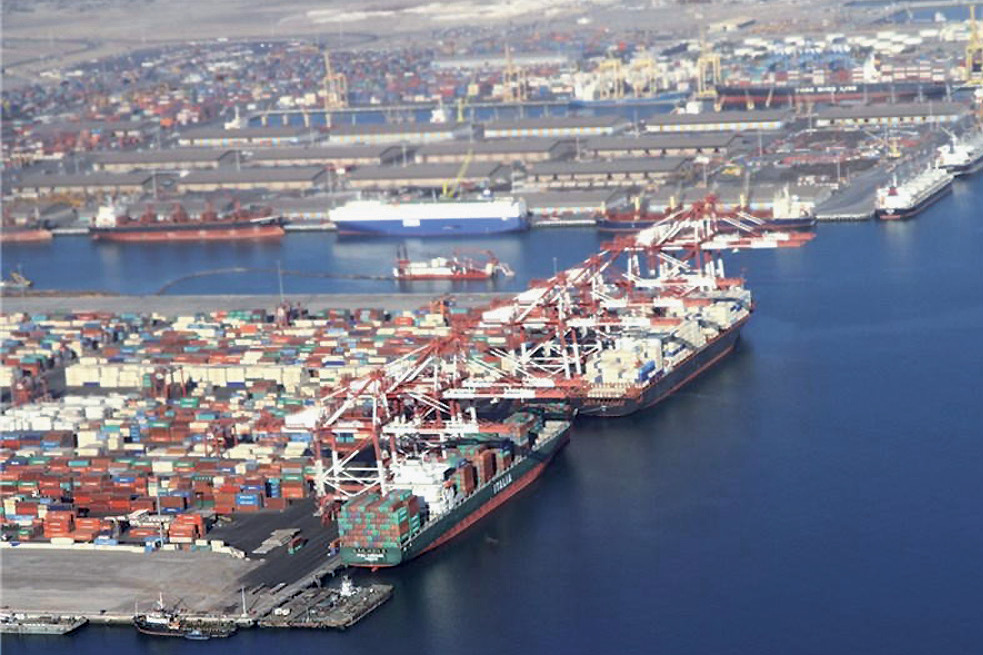 CC/Alireza
Iran’s Chabahar Port on the Arabian Sea, seen here, relieves congestion in Bandar Abbas and will be integrated into the International North-South Transport Corridor. A new Iran-Pakistan border crossing near the coast will facilitate communications between Chabahar Port and Pakistan’s Gwadar Port, the southern terminus of the 3,000 km China-Pakistan Economic Corridor.
View full size 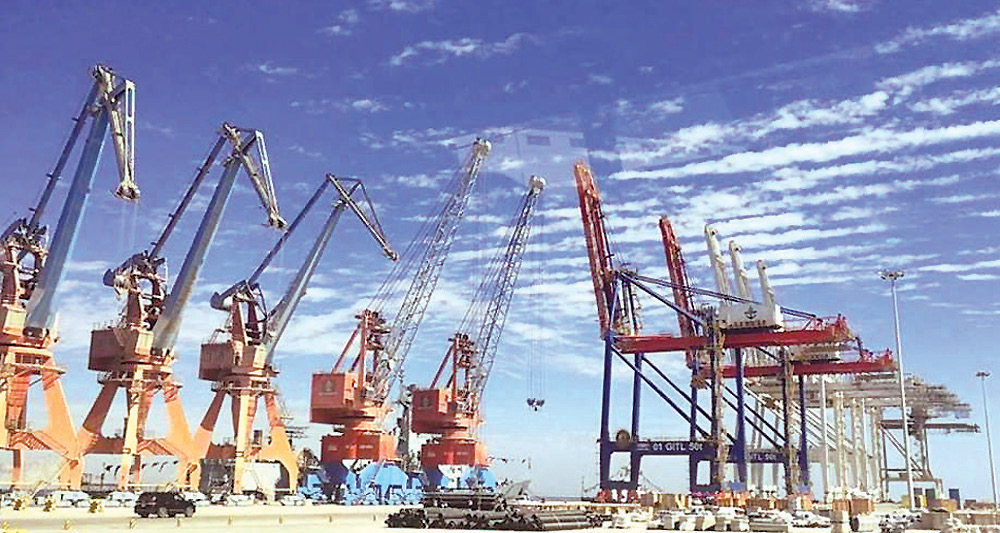 CC/Saadsuddozai
Pakistan’s Gwadar Port, also on the Arabian Sea, it is a mere 180 km from Chabahar Port. Shown are Gwadar’s eleven berths and cranes as of 2018.

The way is now open to further develop two strategic transport and development corridors. The first is the International North-South Transportation Corridor, which is being developed among Russia, Azerbaijan, Iran, and India, beginning in St. Petersburg and ending at Mumbai, passing through the North and South Caucasus. It now can be further enhanced with this agreement. This 7,200 km multi-modal transport corridor was initiated by Russia and India in 2002 and includes Turkey, Kazakhstan, Armenia, Belarus, Tajikistan, Kyrgyzstan, Oman, Ukraine, Syria, and, as an observer, Bulgaria (see Map 2, The International North-South Transportation Corridor). [Box: LaRouche on the Required Economic Protocols for the 1993 Israeli-Palestinian Oslo Accords]

Ports have been built or upgraded, missing rail and road links have been initiated across the whole length of the corridor, and many have been completed or are on the verge of completion. Cargoes from India and the direction of the Arabian Sea can be off-loaded at Iran’s new Chabahar port, then enter the Iranian rail network and go north through Baku, and further north into the Russian network and on to Europe, while crossing the major East-West rail lines linking China and Europe.

In the south, the Iranian port of Chabahar is a mere 180 km from the new Pakistani port of Gwadar, one of the termini of the 3,000 km China-Pakistan Economic Corridor. A new border crossing on the Iran-Pakistan border will facilitate communications between the two ports and corridors.

An East-West corridor passes directly through the South Caucus. This corridor has been dominated by the TRACECA, the Transport Corridor Europe-Caucasus-Asia, which was initiated by the European Union in 1992. It includes Armenia, Azerbaijan, Georgia, Kazakhstan, Kyrgyzstan, Iran, Moldova, Turkey, Ukraine, Uzbekistan, Tajikistan, and Turkmenistan. Conceived by the European Union as a geopolitical scheme to counter Russia, and typically with a low level of funding from the EU tied to “reforms,” the corridor has not reached its full potential. And right behind the EU is NATO, which has worked to bring these countries into its anti-Russian alliance.

The new reality being created by Putin, premised on broad economic cooperation in tandem with China’s Belt and Road Initiative, is serving to neutralize these geopolitical schemes. Peace between Armenia and Azerbaijan will unblock old rail links and open the way to create new ones, which will serve to eliminate the bottlenecks that have plagued logistics in this region. 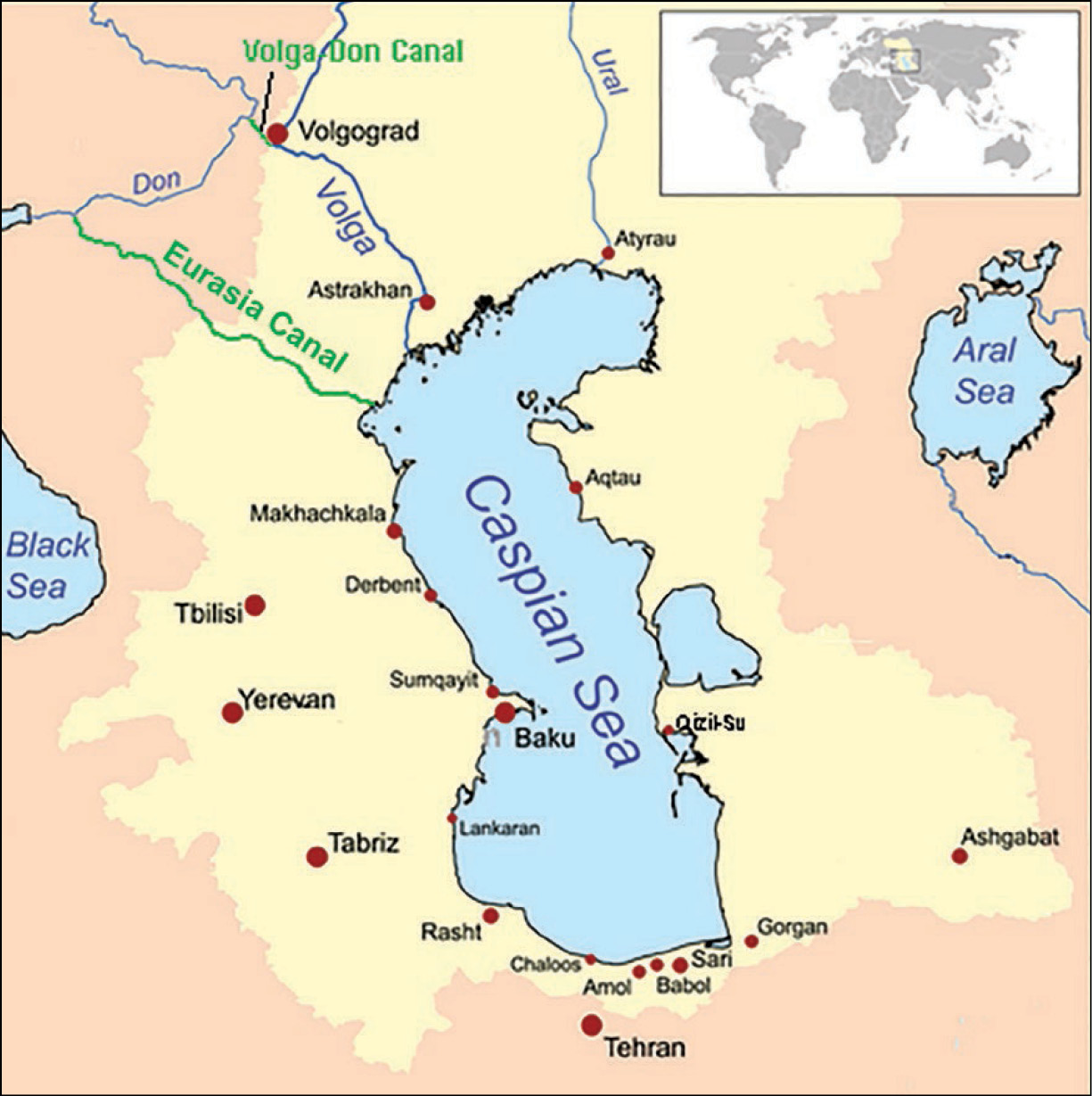 The Eurasia Canal, proposed in 2007 by Kazakhstan President Nursultan Nazarbayev, would provide waterborne access from Central Asia, via the Black Sea, to the Mediterranean and thus to the world’s oceans.

Putin has a potential game-changer for the development of the entire region of Central and Southwest Asia, by building the Eurasia Canal across the Russian North Caucasus connecting the Caspian and Black Seas (see Map 3, The Eurasia Canal). It was proposed in 2007 by Putin and former Kazakhstan President Nursultan Nazarbayev. It would unblock the biggest hindrance to development of Central Asia—lack of access to the open seas.

Russia and China have carried out several feasibility studies for a Eurasia Canal. Such a project would without doubt find political support throughout Central and Southwest Asia, China, and countries on the Black Sea and Eastern Mediterranean. While the decision to build it has not been made, it is interesting to note that Russia has initiated a project to build a new port at Lagan, on the Caspian Sea, as part of the North-South Transport Corridor. This port, located in the Russian Republic of Kalmykia, would also lie at the entrance of the proposed Eurasia Canal.

While much hard negotiation lies ahead for Armenia and Azerbaijan, with Putin they are nonetheless transforming the region into a key hub in the Eurasian Land-Bridge, which is rapidly emerging from China’s Belt and Road Initiative.