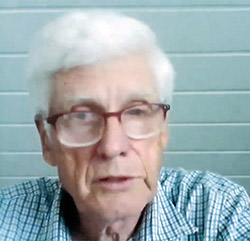 Prof. Horst-Joachim Lüdecke, PhD, is a physicist specializing in fluid mechanics. He is an Emeritus Professor at Saarland University for Technology and Economics in Saarbrücken, Germany, and is also the press director for the European Institute for Climate and Energy (EIKE) in Germany. This is an edited transcript of remarks he delivered to the second panel, “The Real Science Behind Climate Change: Why the World Needs Many More Terawatts of Energy” of the June 26-27, 2021 Schiller Institute conference, “For the Common Good of All People, Not Rules Benefiting the Few!” Subheads have been added. Horst-Joachim Lüdecke
CO2 concentration closely follows the temperature cycle. As the oceans cool, they dissolve more CO2; as they warm, they release CO2, with a time lag of about 800 years (lag not visible on the scale of this graph). Above, temperatures in blue are given as anomalies around 0°C. Below, atmospheric CO2 concentrations are shown in parts per million.
View full size The best-known climate cycle is the shift from warm periods to ice ages with a period length of about 100,000 years. It is known as far back as 2 million years ago and is shown in Figure 1 from 400,000 years down to today.

The data of Figure 1 were obtained from ice cores of the Antarctic. The time axis is in units of 1,000 years (or 1k), given in years before present. At the top, the temperatures in blue are anomalies around the value 0°C. These are Antarctic temperatures. It is noticeable that the warm periods are always much shorter than the ice periods. The cycle of ice ages and warm ages was already known approximately when researcher Milutin Milankovitch explained it at the beginning of the 20th Century in terms of long-term changes of the Earth’s orbit around the Sun. Modern climate research shares this hypothesis. Only the extreme brevity of the temperature increases after each ice age does not fit Milankovitch’s explanation and is still a mystery to Climate Science.

Temperatures over the last 10,000 years can be seen as a small stretch at the far right above. They fluctuate at most around plus or minus 2°C. If you look again at the entire temperature curve, you can see that a new ice age must begin again shortly.

In the lower part of the picture, the CO2 concentrations of the atmosphere are shown in green. Striking is the synchronization of the CO2 concentration with the temperature. But the CO2 follows the temperature with a time lag of about 800 years, which is not really visible here. The cause of this apparent synchronization effect is easy to explain: Warm seawater allows CO2 to outgas, cold seawater binds CO2. So the temperatures are leading CO2, not vice versa, as it is attempted today by the global warming crowd.

FIGURE 2
Average Near-Surface Temperatures of the Northern Hemisphere During the Past 10,000 Years
View full size In Figure 2, only the last 10,000 years are shown. Again, the time axis is given in years before present. You can see again a cyclic temperature gradient. This time the cycles are much shorter. They are between 1,000 and 1,500 years. You can also see that 4,000 and 7,000 years ago, it was much warmer than today.

Before our current warm period, on the far right, a cold period can be seen in blue, called the Little Ice Age. It began in the 15th century and ended only in the middle of the 19th century. With regard to the term “cold period,” one must not forget that such times were very unfavorable for mankind, without exception. Warm periods, on the other hand, were always beneficial.

In the strong warm period 4,000 years ago, we saw the emergence of the great civilizations on the Nile and the Euphrates. The wheel, writing, the plow, the sundial, and much more were invented in this warm period. Cold periods were always the causes of crop failure, famine and epidemics.

Hendrick Avercamp’s 1608 painting, Winter Landscape with Ice Skaters [see first page] illustrates the implications of the Little Ice Age for the population, which was plagued by chilliness, poor harvests, famine and epidemics.

During the severe winters of the Little Ice Age, the Baltic Sea was completely frozen. Swedish troops, who were repeatedly at war with Russia at the time, crossed the icy Baltic Sea on foot several times with heavily packed wagons and cannons. Such a thing is almost unimaginable today. The Little Ice Age ended around 1850 as temperatures rose again quite naturally, albeit with intermittent relapses. In Figure 3 the blue curve shows the thermometer measurements from 1850 until today.

The rising CO2 concentrations in the figure, in green, are considered by the IPCC (Intergovernmental Panel on Climate Change) to be the sole cause of the temperature increase. However, the agreement of the CO2 curve with the temperature from 1850 to 1975 is very poor. Only from 1975 to 2020 it is good. Over the last 20 years, from 2000 to 2020, the satellite data contradict the [ground] thermometer measurements. So for the last 20 years the satellite measurements also do not show a good agreement with the increase of CO2.

Is CO2 the Only Cause of Warming?

So, is CO2 the only cause of warming or not? The media and politicians agree with the IPCC’s view of CO2 being the only cause. Climate science, however, disagrees. The only undisputed fact is that the global average temperature has risen by about 1°C since 1850. But this was to be expected, because after the Little Ice Age it had to get warmer again; otherwise we would still be living in the cold.

If we now take another look at the course of the global mean temperature from 1850 onward as shown in Figure 3, we can see that in addition to the general increase, there has been a wave-like rise and fall in temperatures. Especially the cooling around 1975 made a great stir, which is often forgotten today. At that time, U.S. climatologists feared the beginning of a great ice age and the U.S. media reported on it, as a Time magazine cover story of December 3, 1973 shows.

As a result of its firm belief in CO2 as the sole cause of the recent temperature rise, the IPCC climate models only take into account the effect of CO2, while natural cyclical climate variations are ignored in the models. The model results are correspondingly poor.

U.S. climate scientist Prof. John R. Christy [Distinguished Professor of Atmospheric Science] at the University of Alabama presented his findings on the poor validity of climate models in a hearing of the U.S. House Committee on Science, Space and Technology. [Here Prof. Lüdecke showed a graph from Prof. Christy’s March 29, 2017 testimony that compared a combination of 102 climate model runs with actual readings of tropical mid-tropospheric temperature variations from 1979 to 2016. From a common starting point in 1979, the graph shows an increasingly strong divergence thereafter of the models’ forecasts from reality. The models all show a rate of warming higher than the actual. See Figure 2 of his testimony. It can be seen in Prof. Christy’s graph that no model represents reality satisfactorily. The IPCC climate models are therefore wrong. Nevertheless, they are the basis of climate policy in the U.S.A., Europe and other Western countries.

Consider the Sun, So Unloved by the IPCC

Now, concerning the climatic impact of the Sun and ocean cycles. In 2001, U.S. researcher Gerald Bond published one of the most famous climate studies ever, which has been cited 3,000 times to date [in the scientific literature] and has spawned countless other technical publications. In sedimentary deposits on the ocean floor, Bond discovered cycles of 1,000 to 1,500 years. Remarkably, these “Bond Cycles” are still stubbornly ignored by IPCC reports.

In fact, climate science considers the Sun, which is so unloved by the IPCC, to be the most important clock generator of the Bond Cycles. Its four parameters of climate impact are:

2. UV – Ultraviolet radiation as a fraction of TSI

3. The magnetic field of the Sun, which modulates cosmic rays and cloud formation

Climate forcing by the Sun is seen not only in the long Bond Cycles, but also in solar cycles down to 11 years in length. The solar cycle of 11 years, the Schwabe Cycle, is the best known of these. Horst-Joachim Lüdecke
One of the many indications that the Sun is a climate driver: September temperatures in the Netherlands for more than a century are here compared with the number of sunspots. The Sun is four months ahead of the temperature.

As an example of the numerous evidences for the Sun as a climate driver, September temperatures in the Netherlands for more than a century are compared with the numbers of sunspots in Figure 4, which is taken from a technical study by the author. One can see a good correspondence between numbers of sunspots and temperatures. The Sun is here four months ahead of the temperature.

Besides the direct climatic influence of the Sun, numerous other natural ocean cycles have been discovered, partly completely unknown. In some cases, they can be attributed to the influence of the Sun, but mostly their causes are still completely unknown. Among these ocean cycles—cycles in sea surface temperature and atmospheric pressure at sea level—are the El Niño/Southern Oscillation, Atlantic Multidecadal Oscillation, North Atlantic Oscillation, Indian Ocean Dipole, and the Pacific Decadal Oscillation.

To date, unfortunately, too little is known about how ocean cycles originate or even how they work. However, we increasingly know more about their effects on temperatures and precipitation up to several thousand kilometers away, and even worldwide distances, such as in the case of El Niño. Here are two examples:

Example 1. It has long been suspected that the sea surface temperature variations in the tropical Atlantic have an impact on rainfall in the central Amazon. A 2020 technical study by a team of researchers from German, British and Russian universities explored these impacts in more detail. Their study focused on the occurrence of droughts in the tropical Amazon. Hindcasting calculations were able to produce reliable drought warnings up to 18 months in advance. [Prof. Lüdecke showed Figure 3 from the study by Catrin Ciemer et al., and explained their methodology for forecasting severe drought based on sea surface temperature variations:]

Figure 3 in Ciemer et al. shows in the upper part the Standard Drought Index (SPI) in orange. If the SPI value falls below the threshold of –1.5 (the broken red line in the figure), we have an extreme drought. The blue curve is the averaged cross correlation of the tropical Atlantic with the southern tropical Atlantic. If its value falls below –0.06, marked here with green circles, a severe drought can be successfully predicted. Example 2. Precipitation in the countries of Africa is in many cases significantly influenced by the ocean cycles mentioned earlier and sunspot numbers. In a specialized study of this year, 2021, the nearly 120-year rainfall series of all African countries were examined for the influences of these cycles. The results allow us to track rainfall events across Africa in time and space and to make partial predictions. Figure 5 shows this for the months September to December. One can see how the influence of different cycles and thus the rainfall intensity, is shifting in time and space from September to December.

Another spectacular result of this study is the cross-wavelet of solar activity and Ethiopian rain, which shows an uninterrupted correlation between Ethiopian February rain and sunspots, over 120 years (see Figure 5 of the study). The Sun signal precedes the rain events by 52 months. [Cross-wavelet analysis is a method for examining relationships in time frequency space between two time series. —ed.]

2. The IPCC ignores this, and for that reason alone, it is a political and not a scientific organization.