This article appears in the July 16, 2021 issue of Executive Intelligence Review.

When the clouds are full,

And the tempest master

From his bosom deep

Then the heart alone

To itself makes moan;

And the songs come slow,

While the tears fall fleeter,

And silence than song by far seems sweeter.

Oh, few are they along the way

Who sing when skies are gray!

—“The Meadowlark” by Paul Laurence Dunbar 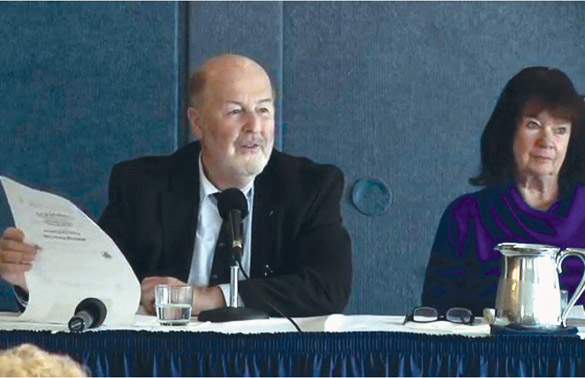 Tom Wysmuller with Helga Zepp-LaRouche, at the National Press Club in Washington, D.C. on January 26, 2016.

I met Tom in 2015 at the tenth Heartland Institute Conference on Climate Change in Washington, D.C., where he gave a slide show that the sky wasn’t falling and the sea wasn’t rising. He came around giving his contact cards to everyone at my table. We met again in the hall and soon found we were kindred spirits—both of us were born in Holland under Nazi occupation; his family emigrated to the U.S. in 1948. The name Wysmuller is the anglicized form of the Dutch Wijsmuller.

Tom attended public schools in New York City, graduating from Bayside High School in 1961. His early jobs involved summers in the Netherlands working on the family’s ocean-going tug and salvage business and stints as a meteorologist at the Royal Dutch Weather Bureau. Tom went on to attend New York University (BA, 1966), The New School for Social Research, Long Island University, and Stanford University. His ties to NYU remained strong, having become Director of and Acting President of their Medallion Society, and eventually President and a multi-decadal director of NYU’s Alumni Association for all of NYU’s schools. In 2017, Tom arranged for Jason Ross, a Schiller Institute Science Adviser, to address the NYU Tandon School of Engineering, on the New Silk Road.

In 1968, Tom was one of nine people chosen through a series of nationwide exams for NASA Executive Interns in the U.S. He worked at NASA before, during, and after the Moon landings. His programming skills were so well-known throughout the agency that at one point he was the youngest person ever selected to serve on NASA’s Source Selection Board for agency-wide computer services.

In 2009 he co-founded the NASA TRCS (The Right Climate Stuff) research group. He considered it one of his greatest achievements when in 2018, he solved the discrepancy of Sea-Level Rise (SLR) reported by the University of Colorado’s and NASA’s Satellites in comparison to land-coupled tide gauges. His “reverse-engineering” technique showed how a programming error generated the much higher rate of SLR being reported by satellites vs. world-wide tide gauge measurements.

Tom was deeply concerned with the poor of the world and specifically for the African countries, who were slated for genocide under climate guru policies. He was committed to a huge expansion of nuclear energy and advanced technology worldwide, especially because he thought that Mars’ moon Phobos would be an ideal jumping off point for moving humanity further out into the solar system. Wysmuller (right) with Rick and Lenore Sanders in 2018, after the reception of the Schiller Institute NYC Chorus concert performance of Beethoven’s Mass in C.

A novel was written about his grandfather’s heroism, sailing ocean-going tugs in the worst of weathers to save ships and lives; it was soon banned by the Nazis. His great-aunt, “Tante Truus,” risked her own life numerous times to save thousands of Jewish refugee children, members of the Dutch Resistance movement, and others whose lives were in danger under Nazi occupation.

In 2012, Tom’s oncologist gave him only a year to live. But Tom had a mission and continued to debunk the climate hysteria, and prevent its deadly policies—for nine more years. He traveled the world, using slides to show the very slow, linear rise in sea level that has been steady since the end of the Little Ice Age. Over the years, he gave numerous presentations including in Porto, Portugal; London, England; Greece, Delft Technical University, and chaired “Water Day” at UNESCO’s IHE Delft Institute for Water Education. He addressed the German Parliament, the 24th World Conference on Climate Change in Rome, and had the honor of chairing the Oceanography Section of the World Congress on Oceans in Qingdao, China.

His meeting with Lyndon and Helga LaRouche in 2015 gave expanded scope to his mission. He understood the urgency of getting the U.S.A. to accept the invitation from China to join the One Belt, One Road program. Tom was among the first climate dissidents with the courage to call for the complete exoneration of Lyndon LaRouche.

In the last five years of his life, he probably put more than 2 million miles on various cars and vans, driving from his home in Maine, to meetings with UN officials, to medical appointments in Texas, where he always took the occasion to visit with his NASA friends. One of his personal highlights was a January 26, 2016 joint appearance with Helga Zepp-LaRouche at the National Press Club in Washington, D.C., in an EIR forum on the topic, “Only a Scientific and Cultural Renaissance Can Stop a new Dark Age.”

Tom believed that he lived in the Golden Age of Humanity, due to our collective developments of technologies, exploration of our solar system, and awareness of ourselves, the Earth, and our Universe.

Humanity has explored the Earth to greater heights, the depths of the oceans, the mysteries of our genetic make up and much more. What an exciting time to have contributed to our knowledge and wisdom!

Tom passed away on the morning of June 29. He is survived by his son, John; his daughter, Jannine; his brother, Allan; his son-in-law, Aziz, and step-grand-daughter, Laila; many cousins, nieces, and nephews; and countless friends. He was predeceased by his wife, Catherine, and his brother, Andrew.

He will be sorely missed by all who knew him.