Dr. Bennett S. Greenspan, MD is on the Board of Directors of the American Board of Science in Nuclear Medicine, and is a past President of the Society of Nuclear Medicine and Molecular Imaging (SNMMI). This is an edited transcript of remarks he delivered to the second panel, “The Real Science Behind Climate Change: Why the World Needs Many More Terawatts of Energy,” of the June 26-27, 2021 Schiller Institute conference, “For the Common Good of All People, Not Rules Benefiting the Few!” Parentheses have been used occasionally to add text from Dr. Greenspan’s slides, which could not be included here. Subheads have been added. 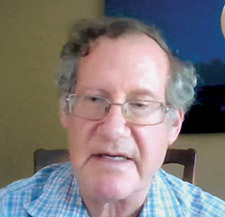 Hello, I’m Dr. Bennett Greenspan. I’m going to be giving you an overview of nuclear medicine, medical specialty that uses radiopharmaceuticals and the tracer principle, to evaluate molecular, metabolic, physiologic, and pathologic conditions of the body for diagnosis, therapy, and research.

These are very tiny amounts of radiation; they’re very safe. We’ve been using these in this field for 80 years with very good results. Most nuclear medicine studies are diagnostic, and evaluate physiologic characteristics or function of various organ systems.

Radiopharmaceuticals portray the physiology, biochemistry, or pathology of a body system without causing any perturbation of function. They are referred to as “radio tracers” because they are given in sub-pharmacologic doses that trace a particular physiological or pathological process in the body.

Images in nuclear medicine are formed by administering a radiopharmaceutical, usually intravenously (some are ingested or inhaled). Images are acquired with a scintillation or gamma-ray camera or, for PET (positron emission tomography, 3D imaging), a PET camera (now a PET/CT combination camera). Acquisition of images requires careful quality control of radiopharmaceuticals and instrumentation.

Now I’m going to go through a few common studies that we perform. One of them is bone scintigraphy [detecting gamma rays emitted from the tracer in the bone tissue —ed.]. There are many clinical indications (such as primary tumor, metastases, osteomyelitis, fracture, arthritis, degenerative disease, and others). [Dr. Greenspan showed anterior and posterior images of a normal bone scan. Next, an example of metastasized prostate cancer, manifested as dark spots in several parts of the body. Then an example of osteogenic sarcoma, where the primary tumor was in the lower part of the right femur.]

In brain imaging, another common study we perform, there are a number of indications. Two of the most common are dementia and epilepsy. [Dr. Greenspan showed a normal brain scan.] This is a PET study, in which the tracer distribution, the metabolism that we’re looking at in the brain, is relatively uniform throughout the cortical margin, the cortex of the brain. Here you see [shows next slide] a case of Alzheimer’s dementia, where it’s not uniform and there’s decreased metabolism posteriorly, in the parietal lobes.

In tumor imaging, there are a number of indications: identification, screening or diagnosis, staging and re-staging, identification of recurrence, residual disease or surveillance, monitoring response to therapy, and evaluating prognosis. 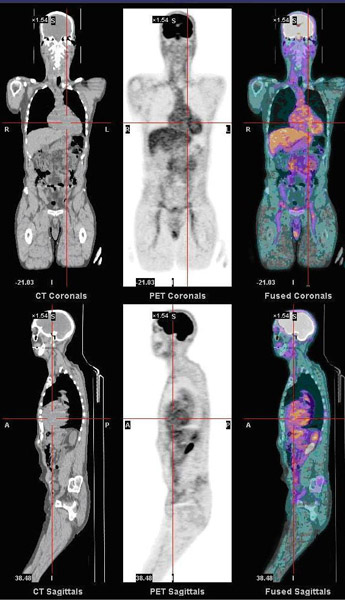 CC BY 3.0/Myo Han
A whole-body PET/CT scan of a normal human body, with FDG-18 as the tracer. From the left, the CT scan (X-ray tomography); the PET scan (positron emission tomography); and the PET/CT combination.
FIGURE 2
View full size 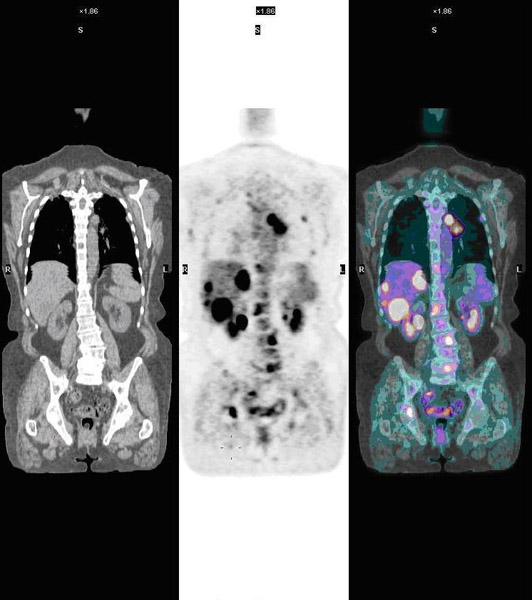 CC BY 3.0/Myo Han
Abnormal whole body PET/CT scan showing multiple metastases of a cancer. The cancer is not visible on the CT alone, at left. It is visible on the PET scan, center, and the combined image at right.

PET/CT is one of the major modalities for imaging a tumor. We can also perform image studies in cardiology (ischemia, myocardial viability), and in neurology (dementia, epilepsy), but the vast majority of PET studies or PET/CT are in oncology.

I’m going to explain how positron emission detection works (as used in PET). A radioactive nucleus [in the tracer molecule —ed.] is an emitter of a positron, which is a positive electron, β+. When a positron is given off, it combines with an electron, and they annihilate each other and produce gamma rays in equal and opposite directions. We use what we call annihilation coincidence detection.

So, if the detectors detect an emission of gamma rays equal and opposite to each other and at the same time, they presume that there’s an event that occurred in between. [The inferred annihilation event will have been very close to the radioactive nucleus that emitted the positron, so the event signals the presence of the radioactive tracer there. —ed.] This technique has better sensitivity and resolution than the conventional nuclear medicine gamma cameras we’ve been using. It also provides accurate quantification. Normally, we can use short-lived positron-emitting radionuclides. The radioactive isotopes of carbon, nitrogen, oxygen, and fluorine are the common ones.

We take advantage of glucose metabolism by labeling glucose with a fluorine-18 (F-18) atom. The result is called fluorodeoxyglucose (FDG), because we take an oxygen atom off of the glucose molecule and put on an F-18, so we can do the imaging. The F-18 goes up to the cell, and the cell takes it in through these glucose transporters and it gets in the cell and it starts getting metabolized, and then it gets stuck. So, it stays in the cell, and that’s why we can image it. It turns out that most tumors, especially malignant tumors, need more glucose than normal cells. And so F-18 FDG was labeled “The Molecule of the Century” in the 20th century. And I think rightly so. [Dr. Greenspan showed F-18 FDG imaging of patients with lung cancer, metastatic melanoma, and disseminated cervical cancer metastasis.]

I want to talk next about radiopharmaceutical therapy. I said initially that most studies are diagnostic. Radiopharmaceutical therapy is currently the hottest research area in nuclear medicine. We are using a number of radiopharmaceuticals, and new ones are being tested every day. We’ve been using iodine-131 and sodium iodide for thyroid disease since the 1940s to treat hypothyroidism and thyroid cancer. That still works very well. In 2013, radium-223 dichloride, an alpha emitter [an alpha particle has two protons and two neutrons —ed.], was approved for treating castrate-resistant metastatic prostate cancer. It’s had some success. One of the industry companies said that currently about 13% of nuclear medicine procedures are therapies. They predict that’s going to rise to 30% by 2030.

So, this area is really, really hot stuff. It’s expanding exponentially, and we’re getting some good results. We have sodium iodide for hypothyroidism and for various thyroid cancers. We have some somatostatin receptor-targeted therapy for neuroendocrine tumors. Lu-177 Dotatate (Lutathera) was approved by the Food and Drug Administration in January 2018.

We have another agent (I-131 MIBG) for neural crest tumors.

Coming soon is the agent (Lu-177 PSMA, prostate-specific membrane antigen) for prostate cancer. This one is being studied at the Peter MacCallum Cancer Center in Melbourne, Australia, and this was the SNMMI Image of the Year in 2018. You can see there’s some incredible results here. The areas in red are tumor. The image on the left [of each pair —ed.] is before therapy, and the image on the right is after therapy. This agent is being used in Europe and Australia and Asia, and hopefully it’ll be soon approved in the U.S.

The agent Lu-177 Dotatate (peptide receptor radionuclide therapy) is another example where we can use imaging to detect tumor, before and after treatment. The imaging agent was just approved very recently, and the images show a vast improvement after PSMA therapy. The therapy agent is not yet approved in the U.S., but we think it will be, within the next year.

Here’s an example [shows slide] of Iodine-124 PET/CT scans obtained before and after Selumetinib treatment of a patient with thyroid cancer who didn’t respond very well. [But] now we can use a certain drug that will help reverse the process and allow these lesions to show up, so we can then treat them. This work comes from Memorial Sloan Kettering in New York.

Positron emission detection. At left, radioactive decay in the tracer chemical provokes a positron-electron annihilation event, yielding two gamma photons flying in opposite directions. At right, the detector array identifies multiple gamma photon pairs, enabling it to determine the region where the tracer is concentrated.

In an amazing case in Germany, someone had extensive prostate cancer disease and the PSA (prostate-specific antigen) was very high. They treated the patient with Lu-177 PSMA, and the patient got worse. So they thought, well, we need to use a different agent. So, they used Actinium-225 PSMA to test the same [treatment] molecule, but it’s a different isotope. After three cycles, the PSA went down from 419 to less than 0.1. That’s an amazing result! See imagery in Figure 3 here (Curing the incurable!)

In the near future, based on biological characteristics of tumors, we will be seeing increasing use of predictive or prognostic markers, assessing therapeutic response, and focus surveillance and screening. This [forecast] comes from Dr. Lalitha Shankar at the National Cancer Institute.

The Future: Precision and Theranostics

Dr. Richard Baum from Germany came up with some comments on the future, and I think he’s a visionary. I think he’s right. [Dr. Greenspan reads from a slide of Dr. Baum’s vision, titled “Theranostics—The Future of Cancer Treatment”:] “Eventually we’re going to be classifying cancers by molecular phenotypes, and the organ of origin will be a secondary classification. These molecular phenotypes will be determined by molecular pathology and by molecular imaging, using our PET and SPECT studies, and other imaging techniques like MRI and optical, using cancer type-specific probes.” This is what precision medicine will be become.

Future approaches may include utilizing negative feedback loops, such as in thyroid cancer; paralyzing various enzymatic pathways; whole-body irradiation for immune stimulation; disrupting the tumor microenvironment, especially the inflammatory component, and the acidic intra-tumoral microenvironment; treatment based on genetic mutations, including clonal variations; and preventing tissue invasion and metastasis. I think I probably shouldn’t go over all these because it’s pretty complicated.

I predict that future developments in cancer therapy will include specifically targeted (precision) radiopharmaceutical therapy with combinations of alpha- and beta-emitters, probably as theranostic pairs—“theranostic” means a combination of diagnosis and therapy—targeting of various enzymatic pathways and cell surface receptors, including clonal variations to address the variation in tumors. These radiopharmaceutical therapies will also rely on precise dosimetry, probably including intralesional dosimetry. In other words, dosimetry of actual tumor deposits. These radiopharmaceutical therapies will provide more precise and comprehensive therapy and lead to much improved outcomes and less morbidity. Thank you very much. 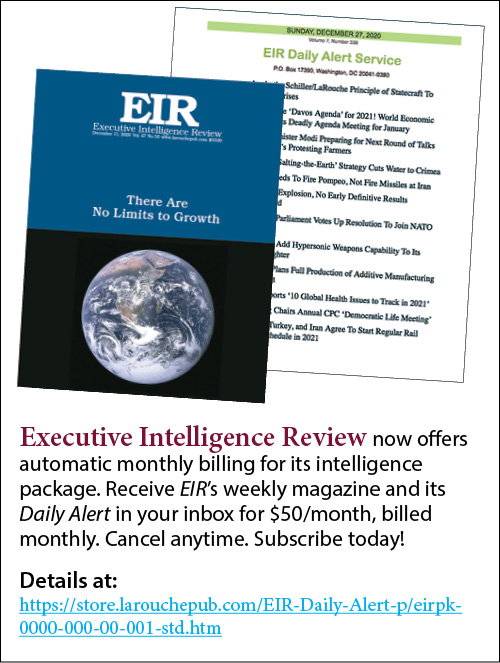