This transcript appears in the July 30, 2021 issue of Executive Intelligence Review.

How Americans Are Herded into Green Energy by Weaponized, Politicized, Monetized Science

Mike Thompson is a serving member of the Kansas State Senate, representing the 10th Senate District in Johnson County. He is Chairman of the Senate Committee on Utilities. This is an edited transcript of remarks he delivered to the third panel, “Weimar Germany 1923 Comes Again: Global Glass-Steagall to End Hyperinflation,” of the Schiller Institute’s June 26-27 conference, “For the Common Good of All People, Not Rules Benefiting the Few!” A Subhead has been added. 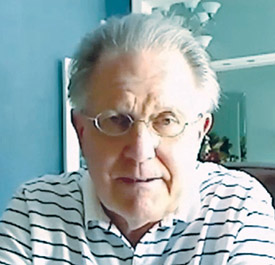 I want to thank the Schiller Institute for inviting me here today to this conference, and for everybody on the conference. This is such an important policy issue, and there are so many out there; this is just one that we’re dealing with.

My name is Mike Thompson, I’m a Senator from the 10th District in Kansas. This is my first term as a Senator; I actually took over from the previous Senator last year in the final year of her term, and then I ran for re-election and won this year in an area that’s very competitive. Kansas used to be a red state pretty solidly, but some areas—particularly the larger areas where I am, in the Kansas City metro [area] and some of the outlying counties, it’s becoming increasingly blue. And it’s a worrisome situation, but I’ve fought hard; I walked 1,000 miles last year to get re-elected. Now, I’m the Utilities Chairman for the State Senate of Kansas, and one of my big issues is this energy policy and what we’re facing.

It’s a problem here in Kansas. We’ve got too much wind power as it is. In my previous career I was a meteorologist. I was on television for almost 40 years, but I was trained in the Navy. I went through the Naval Weather School, was on an aircraft carrier. So, I’ve been involved in weather and climate for four decades, and I’ve been seeing this steady gas-lighting of the American public regarding CO2 and climate change, which started off, as you recall, first as global cooling back in the 1970s. When we had the big heat wave in 1980, the academics saw that the global cooling wasn’t working, so they switched to global warming. When we had a plateau in the late 1990s, they decided, “Let’s go with climate change, because it makes it easier for all of us.”

It’s nothing more than a scam; I could spend two hours talking about that. It is nothing but a weaponization, politicization, and monetization of science to use to herd Americans into—for one thing—this Green energy revolution that we’ve been seeing.

Here in Kansas, as a result of that, since 2007 when we had only 2% wind turbines as our generating capacity, we now are up to about 41%. As a result, our electrical rates in Kansas for all three—residential, industrial, and commercial—went from below the national average to now above the national averages. We’ve instituted more wind name plate capacity here in Kansas than the surrounding states. As a result, we are not competitive anymore with large businesses and institutions that use a lot of electrical energy. There are some little pockets in Kansas like McPherson that do pretty well, but they’ve got a different paradigm and a different model from many other areas of Kansas. So, that’s a big problem for us.

Unfortunately, there’s a new “Sustainability Transformation Plan” from Evergy, our big IOU—investor-owned utility; it’s the only one we have. They’re getting triple-A bonding for the state of Kansas to retire coal plants and replace them with wind and solar. So, we’re taking all of our eggs out of a reliable generating capacity, and putting them into non-reliable, intermittent wind and solar.

Wind and Solar are Not the Answer

If you do the deep dive on the wind, you know that it doesn’t blow most of the time; in fact, in certain portions of eastern Kansas there are 230 days a year where the wind doesn’t blow enough to produce electricity. When it does, maybe one day out of every three years hits the rated capacity of wind speed. You need wind to be blowing steadily at 25 mph to produce a name-plate capacity on a wind turbine.

So, say it’s a 2 megawatt wind turbine. The wind would have to be blowing consistently, steadily for 24 hours [a day] to produce 2 megawatts of power. So, it makes absolutely no sense to take away our coal plants—and it’s undermining them from a cost standpoint as well—and putting it into these highly-subsidized, renewable energy sources that, if they weren’t subsidized, could not stand on their own; they don’t produce enough electricity to do so. There’s not the battery storage in place to be able to do so.

We have one nuclear plant in the state with the capacity to add a second reactor, but the cost and the regulation is so prohibitive—I talked to the utilities, and it’s just not in the cards.

To complicate matters, we’re part of the Southwest Power Pool, which is an 11-state region. As a regional transmission organization—RTO—they could care less whether we add more wind. They like it, because the wind, because it’s so subsidized, comes online at a cost that clears the market before our coal and our natural gas plants and what few diesel plants we have can come online and generate electricity. So, whenever the wind is available, it’s undermining our baseload plants that we rely on 24/7 for electricity.

It’s a very complex mess, and the more wind, the more solar that we add to the mix, it’s going to turn Kansas into a situation where we are unreliable during Arctic outbreaks. You saw what happened in Texas during the Arctic outbreak. Millions of people were without power. The wind did not come through down there; they had some plants that were not ramped up.

What happened here, we have excess capacity; our peak summer load is about 50,000 MW. We have 90,000 MW of generating capacity. We should not have had one single black-out in the state in February when we had the Arctic outbreak of bitterly cold air. But we did have rolling black-outs. And the Southwest Power Pool, they have some questions to answer. Why, with all this excess generating capacity, did we lose power? The wind claims that they out-performed their expectations, which turned out to be somewhere around 1% in the entire 11-state region. Well, that’s sort of like saying the water boy out-performed really well, and that’s why the Kansas City Chiefs won the football game. It just doesn’t make a bit of sense.

So, that’s kind of the overview of the situation here in Kansas, and what we’re fighting. Invenergy is a big wind company, and they plan on adding an additional 1,000 wind turbines to the state. We’ve already paid for huge amounts of transmission lines in Kansas, and we’ll pay for more. Most of that wind energy is sold outside of the state, so we’re paying for the infrastructure, but we’re not getting any of the benefits; not that there’s really that much benefit to begin with.

So, that’s going to be increasingly putting more of a load on rate payers in Kansas. As we see this proliferate throughout the Midwest in states like Nebraska, which I know is going to be next on the list—they’re going to try to add more wind up there, and Wyoming I know is trying to fight this—you’re going to see more of these same problems: less reliability, increased electrical rate costs, and retirement of plants that we rely on. There’s only 98 nuclear reactors, I think, in the United States that are operational right now. I think there’s one under construction, I think it may have been halted. So, nuclear, which is a wonderful source of electricity, is being ignored.

What’s interesting in the polar vortex, the very cold air that we had, part of the problem was our generating plants did not have firm delivery contracts for natural gas for a third of their supply. So, they were going out and buying that on the market, and when that cold air hit, the natural gas price spiked to, at some points, $625 per 1,000 cubic feet—MCF—of natural gas. Normally, it’s $1-2.

So, there were some people in Kansas who had $100,000 gas bills or higher, just because there was no reliability there. It’s a very complex problem that we’re dealing with, and it’s being complicated because of the renewables. If we didn’t have all this wind, if we didn’t have all this solar, we’d be looking to our reliable sources and firming them up and doing what we need to, to keep them in good shape. But unfortunately, we’re not.

All you have to do is look to California. PG&E—Pacific Gas and Electric—out there, because they’ve gone so heavily into renewables, they can’t even afford to do the maintenance on their transmission lines well enough to serve the customers. That’s part of the reason they have the issues with the wildfires over the recent years. They weren’t able to clear the brush, the maintenance on the lines was a problem, and PG&E is bankrupt. That’s what we’re going to do here.

I think I saw this morning that Evergy was downgraded. I just glanced at an email. At any rate, we’ve got a very messy problem here in Kansas; it’s kind of a microcosm of what we’re going to see across the country as these renewables proliferate across America.