Daisuke Kotegawa is a former official in Japan’s Ministry of Finance, and a former Executive Director for Japan at the International Monetary Fund. This is an edited transcript of his video greeting to the August 14, 2021 LaRouche Legacy Foundation seminar, “On the 50th Anniversary of LaRouche’s Stunning Forecast of August 15, 1971: So, Are You Finally Willing To Learn Economics?” 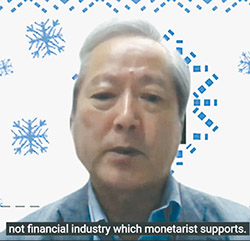 As Lyndon LaRouche repeatedly stated, it is the manufacturing industry that helps human beings develop, not the financial industry that the monetarists support.

The Glass-Steagall Act, introduced in 1933 in the United States to separate investment banking from commercial banking, was completely abolished in 1999. This led to “moral hazard” for the bankers who knew that the government would always save the banking groups that included them, both commercial banks and investment banks.

Reckless gambling types of investment by British and American investment banks after 1999 caused the Lehman shock. Based upon this experience, a new Basel rule to impose large reserve requirements on bank lending, including to hedge funds, was introduced. However, this new rule killed venture fund types of commercial loans.

As LaRouche always emphasized, we urgently needed to reinstate the Glass Steagall Act to restore healthy financial sectors throughout the world.

That Basel rule problem, just mentioned, also became a problem for other Asian countries, which had developed mainly through their manufacturing sectors. The only exception was China, which was able to escape from the application of the Basel rule and has become the major world manufacturing center.

It can be said that the world economy has transitioned from a manufacturing dominated economy to the era of monetary gambling. This transition goes completely against LaRouche’s economics, while it is supported by Anglo-American monetarists. The result of this transition has been the widening gap between the rich and the poor, which has been the cause of the voters’ revolt that began in 2016.