Attorney Theo Mitchell is a former State Senator from South Carolina, serving in the South Carolina General Assembly from 1975-1995. In 1994, shortly after Lyndon LaRouche was released from prison, Sen. Mitchell introduced LaRouche at a conference of the National Black Caucus of State Legislators. In 1995, Sen. Mitchell participated in and helped to organize public hearings convened by the Commission to Investigate Human Rights Violations, to investigate allegations of gross misconduct by the U.S. Department of Justice, including the case of LaRouche, and the infamous FBI’s Operation Frühmenschen, which targeted Black and Hispanic elected and public officials, including Sen. Mitchell himself.

This is an edited transcript of his video greetings delivered to the August 14, 2021 LaRouche Legacy Foundation seminar, “On the 50th Anniversary of LaRouche’s Stunning Forecast of August 15, 1971: So, Are You Finally Willing to Learn Economics?” 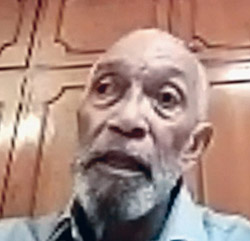 It’s an honor to appear on behalf of the late Lyndon LaRouche, and of course Helga. I’ve known him in many ways over the years. And under the circumstances of knowing him, I learned a lot from him.

He was a projectionist; he was a predictionist. I’m thinking about the Strategic Defense Initiative—the SDI. When he proposed the United States, Russia, China, and India to get together in a Four-Power arrangement. Ronald Reagan even used it during the time that he was President.

LaRouche was a person who actually could tell the future. He’s missed, and he’s going to continue being missed. He predicted the Operation Frühmenschen, when the FBI and others took five years of his life from him. Now, he came out [of his imprisonment] like nothing had happened. But he complained about his shoes; that’s the only thing he complained about. I remember that, didn’t you remember, too? His shoes; he said they wouldn’t give him any more shoes.

But he was a person who certainly is missed. And as a friend, I certainly miss him.