LaRouche in the Libraries

Gretchen Small is a member of the Board of Directors of the LaRouche Legacy Foundation. This is an edited transcript of her presentation to the second panel, “Earth’s Next Fifty Years,” of the August 14, 2021 LaRouche Legacy Foundation seminar, “On the 50th Anniversary of LaRouche’s Stunning Forecast of August 15, 1971: So, Are You Finally Willing To Learn Economics?” 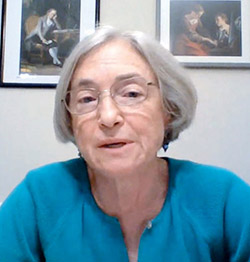 It is appropriate that we return in this section of today’s seminar to where we began: with Lyndon LaRouche’s discussion of how he set out to change the West’s disastrous policy course over 50 years ago, by picking intellectual fights at universities in order to recruit and educate a new leadership out of the up-and-coming younger generation.

The oligarchy has long understood how dangerous this can be to their cause. Socrates was poisoned for just such corrupting of the youth. Socrates, like LaRouche, had set out to be the gadfly, whose sting would provoke young minds to search for the Truth, the Good and the Beautiful as the basis of government.

Over two thousand years later, who is left standing from that fight? Those who poisoned Socrates? Or Socrates, whose thoughts are still pricking minds into motion through Plato’s beautiful dialogues?

I invite all of you to join the LaRouche Legacy Foundation in carrying out this mission! One crucial role you can play, is to help place LaRouche’s books in every community and university library possible. We must get people to read Lyndon LaRouche’s writings. Not merely hear about him, but experience for themselves why the oligarchy still hates him so.

Think of the effect it will have upon the United States, for starters, if Volume 1 of LaRouche’s Collected Works, containing four of his most important and influential works on the subject of physical economy, is available on shelves of libraries around the country. We can use that to help spark small groups to gather to read and study LaRouche together. People are tired of slogans and are searching for real answers to the existential crisis we face. You don’t know who from your community—which farmer, which businessman or woman, which parent or grandparent agonizing over the future of their children and grandchildren—might find the volume in the library and begin to find the answers they are seeking.

If you haven’t dug into reading LaRouche yourself, now’s the time to experience the joy of rediscovering LaRouche’s discoveries for yourself. It may not be easy, but don’t worry, he will make you laugh along the way.

Now, look, LaRouche is controversial. The LaRouche Legacy Foundation could simply donate copies of this beautiful book to local and university libraries, but many would end up on the table at the next library book sale. If a local citizen, or better yet a group of local citizens sends the book along with a letter explaining why they, as members of that community, think it is important for LaRouche’s book to be on the library’s shelves, then there is a better shot at getting it there. It doesn’t take a long letter, but personal requests are key.

The same thing goes for getting LaRouche’s book onto university library shelves. Letters from college alumni to a library at their alma mater, requesting that LaRouche’s book be added to their catalogue, can help bring the fight for LaRouche’s ideas to those universities.

If you’d like to get involved in this project, and want some ideas on how to get it done, please get in touch with us. We want to see this done.

Now, you will hear from a group of young people from different parts of the world speak on their discovery of LaRouche today. But first, we are going to hear a short audio clip of LaRouche himself in action 50 years ago, in his famous December 1971 debate with Queens College economics professor Abba Lerner which you heard about this morning.

After August 15, 1971, LaRouche had launched a nationwide campaign challenging the “Quackademics” teaching [economic] theories which had just been proven to be utter failures. He or his associates debated professors, and even gave an eight-class course on physical economy and the human mind at such campuses as the University of Michigan; Rutgers in New Jersey; Miami University in Oxford, Ohio; and at least three New York City colleges. If there were more time, I could tell you about LaRouche’s course and debate at Swarthmore College which I attended!

The debate with Lerner, however, was the most momentous, historically. LaRouche was taking on the leading Keynesian economist in the United States at the time, who was backing Nixon’s August 15th announcement.

Abba Lerner was also a key associate of Sidney Hook, the first chairman of the American branch of the Dulles Brothers’ Congress for Cultural Freedom. If you don’t know how evil that operation was, look it up on LaRouche’s Executive Intelligence Review website. And LaRouche took them head on.

The room was packed with students. Here you’ll first hear some of Lerner’s opening protests that he was no fascist, followed by Lyn’s opening salvo.

Later on, as the debate went on, a cornered Lerner would blurt out that “even if I were a member of the Nazi Party, everything I said here would be true,”—and then his infamous admission: “But if the German Social-Democracy had accepted [Hjalmar] Schacht’s policy, Hitler would not have been necessary.”

Sidney Hook, present for what had turned into a debacle for the financiers who ran him, told a LaRouche organizer when it ended: “Your man has shown himself to be an effective advocate; therefore, he will never be allowed to intervene in public policy debates again.”

The war against LaRouche had begun. It is high time we defeat that war once and for all!

[What follows is an audio excerpt from the debate between Lyndon LaRouche and Abba Lerner, at Queens College, in New York City on December 2, 1971. The full one-hour debate is available here.

Prof. Abba Lerner: I’ve also been accused of being a kind of sadist, that is, that I love to reduce the standard of living of the working people, to grind their faces in the dust—I think is the proper expression for this. That is because I have been against increasing wages and in fact on some occasions, I’ve proposed a decrease in wages.

Now, in the context, this must be understood—that I did not believe, ever, that this decrease in wages would make the workers any poorer or have less things to eat. It was clearly understood that if there was a decrease in money wages, which would make it—avoid it—the inflation, so that they would be just as well off, with the lower money wage as with the higher money wage. The most important difference being that there would be more work for more people, which I am in favor of.

Lyndon LaRouche: The trouble which he, Professor Lerner, doesn’t seem to grasp, is that in the ordinary course of events, economic teaching in universities is more like the practice of a priesthood than anything to do with reality. It’s simply something you learn; you don’t use it in business much. In point of fact, most business economists or most practicing economists in business do not have an economics training, but usually in industrial engineering, or in some other type of training.

And therefore, since the lives and well-beings of millions, of even billions of people are at stake—an error in the domain of abstraction is not an intellectual error. It can be a bloody crime against humanity.

A professor who says innocently, “the economy from my point of view would be better organized if certain administrative arrangements were made,” does not necessarily think out to the kind of administrative arrangements which in practice realize that very innocent practice. Professor Lerner may attempt to divorce his economic policies from the policies of the government of Brazil and see in that abstraction the detachment from that. However, you cannot carry out the economic policies, which are recommended for Brazil without having the kind of government which makes those economic policies work. You could not have the kind of policies which are recommended, which he’s recommended as a classic austerity policy to decrease unemployment. Now it’s classic in the sense that this is precisely the policy of Schacht from 1933 on in Germany, in which wages were frozen to prevent the inflation and in order to increase employment.

He may personally detach himself from that, but it’s not possible for the politicians who accept his advice to detach themselves from the kind of government and the kind of procedures which enable those abstractions to become reality. And that has to be grasped, because now, no longer is economics merely a plaything of an obscure corner of the academic priesthood. Now, economic policy is that which determines the lives and daily lives and conditions of people. The form of economic policy determines the kind of government which is necessary to carry it out. And the only kind of government which can carry out the kind of policy which Prof. Lerner recommends in all well-meaning, all good intention, would have to be a Bonapartist, or fascist government.

He may now be opposed to fascism with every fiber of his being. This was also true in Germany, where many economists, liberal economists, who proposed austerity, were also opposed to the Nazi regime. But, nonetheless, there are men who will take up these policies and carry them out, and they will be Bonapartists or fascists, but not Professor Lerner. So, he must understand that sometimes his good intentions do not ensure that his policies carried into practice will work out as he sees them in human terms.