LaRouche’s Education of the Youth

Carlos “Itos” Valdes is a member of the Philippine LaRouche Society. This is an edited transcript of his presentation to the second panel, “Earth’s Next Fifty Years,” of the August 14, 2021, LaRouche Legacy Foundation seminar, “On the 50th Anniversary of LaRouche’s Stunning Forecast of August 15, 1971: So, Are You Finally Willing To Learn Economics?” 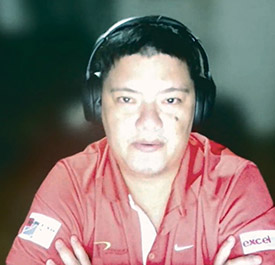 Good day to all! My name is Itos Valdes. I am the son of the Butch Valdes [who is] the founder of the Philippine LaRouche Society, among many other organizations here in the Philippines. Many of you know his own LaRouche story by now. So, let me narrate my own.

I first met Lyndon LaRouche at home. It was in the mid-90s. My father would bring home assorted magazines and reading materials, and I happened to catch an issue of Executive Intelligence Review (EIR). I recall that the cover had the headline: “The Philippines: Kissinger’s Next Iran?” Of course, that first issue slowly built up to many issues piling up at home, as he had since subscribed to EIR. I would pick up a few issues here and there when the inspiration hit—especially as world events unfolded. Before long, as I read more EIR material, and an occasional 21st Century Science and Technology magazine article, my classes at university seemed to lose significance.

Fast forward to 2000, and my first Presidents’ Day conference in Leesburg, Virginia. I was sent by my father, along with associates, to attend. My host was the late Gail Billington, wife of Mike Billington, who was still incarcerated at the time. Her special responsibilities, I later learned, focussed on Southeast Asia, and it was a joy conversing with her to and from the offices. I will never forget Gail. The conference was life changing. From Lyn’s opening address, the presentations, the panels, all the way to the cadre classes—which had music, philosophy, economics, and history.

The next period saw my father, brother, and myself return to the conferences on separate occasions, all returning home with a similar fervour to change the world. I always treasure one visit where we met Lyn and Helga at their house for an intimate dinner. As always, my goal was to absorb as much as I could at the time—not easy, as you know, with Lyn. There was a whole Universe to absorb in several short hours! Each visit was a life-changing event, and each reading of LaRouche’s work continues to affect minds today.

I learned to man book tables, engage in Plato and Shakespeare reading sessions, and sing beautiful songs! My love for history was redefined, made tangible and personal, and wholly enhanced—as I visited the Washington, FDR, JFK, and Lincoln Memorials, the Smithsonian, Gettysburg, and Fort McHenry, to name a few. Plato, Beethoven, Kepler, and Schiller became some of my best friends; while Lyndon LaRouche, Benjamin Franklin, Franklin Roosevelt, and Alexander Hamilton became family.

Those visits solidified our association with LaRouche and have led to setting up our own organizations, built on the same principles. My brother, Anton, and I started weekly Plato readings. Sometimes it would just be the two of us, but we started the Philippine LaRouche Youth Movement and were fairly successful for several years. We set up speaking engagements and meetings when Gail and Mike Billington, and Richard Freeman came over to visit. We learned how to organize people through great ideas, just as we were organized. We taught ourselves to look into our own history for similar ideas, related events, and world-historical figures.

The association with Lyndon LaRouche has not come without challenges, as we all know. The ideas are universal, and the work required to understand the principles is not easy. Especially since it compels you to consider the whole question of mankind’s place in Creation, in relation to all sciences, subjects, and events. Many times, frustration got the better of us. Many times, we had to take breaks from the fight. Many times, we sought refuge in popular culture. But we always returned to LaRouche. Plato’s Allegory of the Cave describes this challenge perfectly.

LaRouche provided us the guiding principles in order to appreciate the universe and mankind’s role in it—a lens with which to examine current and future history. The current history of the world has seen many upheavals, more so in the last decade, as the current financial system continues its violent breakdown, as LaRouche correctly forecast. His call for a Four-Power summit remains the only truthful, viable, and long-term solution, providing a profoundly beautiful alternative to the depopulation Great Reset plans.

In the Philippines, we continue to battle the oligarchical forces controlling government, as well as the decades-old dumbing down of our population amidst increasing poverty. Our resources are limited, our platforms small, and our forces spread out. But, as Lyn said, the power of ideas will always win the day.

Confucius once said, “May you live in interesting times!” I think that might be a bit of an understatement for today.

As we continue our fight for a new world Renaissance from our little corner called the Philippines, our anchor will always be the great ideas and principles learned from the LaRouche movement, the people he introduced to us, and the organizations he built. Through this, we hope that future generations of Filipinos will discover and work on the ideas of Lyndon LaRouche, and, by doing so, help secure the future, not only for the Philippines, but for the community of sovereign nation-states as well.

LaRouche always advised us to have fun! We intend to do just that!