Lyndon LaRouche on the World Stage

Dennis Small is the Chairman of the Advisory Committee of the LaRouche Legacy Foundation. This is an edited transcription of his presentation just prior to the Panel 1 Discussion Session of the August 14, 2021 LaRouche Legacy Foundation seminar, “On the 50th Anniversary of LaRouche’s Stunning Forecast of August 15, 1971: So, Are You Finally Willing To Learn Economics?” 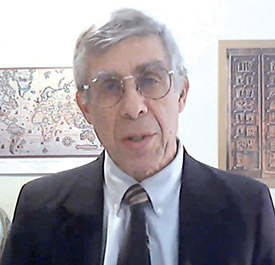 Lyndon LaRouche was a central actor on the world stage over the last half century, far more than most Americans realize, and far more than his opponents would like to admit. His ideas profoundly penetrated leading political and intellectual layers around the globe, even when they disagreed with some or even most of what he was saying. In addition to the wide circulation of his writings and videoconferences, Lyndon and Helga LaRouche personally visited over 40 countries, where they met with hundreds, if not thousands, of leading figures.

Are you aware of the fact that Lyndon and Helga LaRouche, along with a couple of their direct envoys, met with some 24 heads of state and government from twenty countries over the years—from India’s Indira Gandhi to Mexico’s José López Portillo, France’s Michel Rocard, Israel’s Abba Eban, and Ronald Reagan of the United States?

There are among them sterling individuals who would be here speaking to you today, but for the fact that, like Lyndon LaRouche, they have passed away. And so, we decided to make sure that their voices were heard in recorded form, to conclude this morning’s discussion of LaRouche’s ideas. 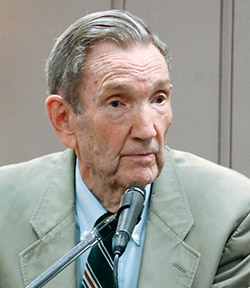 We begin with an American, Ramsey Clark, a former Attorney General of the United States under Lyndon Johnson, who was also LaRouche’s attorney on appeal of his railroad conviction in the Alexandria, Virginia “Rocket Docket” in 1988. Clark here addresses the August 31, 1995 Independent Hearings on Misconduct by the U.S. Department of Justice, which investigated the LaRouche case and other legal atrocities in this country:

But in what was as complex and pervasive a utilization of law enforcement, prosecution, media, and non-governmental organizations focussed on destroying an enemy, this case must be number one. There are some where the government itself may have done more, and more wrongfully over a period of time, but the very networking and combination of federal, state, and local agencies, of the Executive and even some Legislative and Judicial branches, of major media and minor local media, and influential lobbyist types—the ADL preeminently—this case takes the prize.

The purpose can only be seen as destroying—it’s more than a political movement; it’s more than a political figure. It is those two, but it’s a fertile engine of ideas. A common purpose of thinking and studying and analyzing to solve problems, regardless of the impact on the status quo, or on vested interests. It was a deliberate purpose to destroy that at any cost....

In the LaRouche case, they’re book people. I have to confess to intellectual weakness; I find reading easier than thinking, so I read constantly. Nearly blinded myself from too much reading. Got 15,000 books at home; read most of them, unfortunately. As you can tell, I haven’t learned much, but I haven’t stopped yet. These are book people. They had publishing houses going on; important publications. Non-profit stuff. The government comes in a completely—these are just some of the peripheral things that [LaRouche’s lead attorney] Odin [Anderson] and others might not have explained to you. But these are what they were about; ideas, information, social change, meeting the needs of human people all over the world, humanity all over the world. We’re going to have a billion more people before the end of this millennium, century, decade. And the vast majority—80% of more—are going to have beautiful darker skin, and they’re going to live short lives, short lives of sickness, of hunger, of pain, ignorance, violence, unless we act radically. And these books have ideas, some will work, some won’t work, but they’re ideas that can be tested in the marketplace, as we used to say. (end video)

We travel next to the city of São Paulo, Brazil, where on June 12, 2002, then-U.S. Democratic Party Presidential pre-candidate Lyndon LaRouche was awarded honorary citizenship for São Paulo by the City Council of that city of more than 18 million people, the third-largest in the world.

LaRouche was invited to Brazil to receive this honor by Dr. Havanir Nimtz, the principal representative on the São Paulo City Council of Brazil’s PRONA party, founded by Dr. Enéas Carneiro, one of Brazil’s preeminent cardiologists and a former Presidential candidate. Less than four months after hosting LaRouche’s visit, Dr. Enéas was elected to Brazil’s National Congress with the largest vote total ever achieved by any candidate in the entire history of Brazil.

Dr. Havanir Nimtz (video): There is a tidal wave which is today shaking the nations of the planet. Nations enslaved to a repugnant, obscene, fetid, filthy financial system which is already in the process of full global disintegration. As Mr. LaRouche forecast many years ago, there is not an Asian problem, nor a Russian problem, nor an Argentine problem, nor a Brazil problem. The crisis is systemic; the crisis is planet-wide. All of civilization is heading towards a dark age. It is for all of these reasons that today, in this chamber, Mr. LaRouche is honored as the legitimate representative of the worldwide struggle against ruinous speculation which is dragging the world into the abyss.

Some centuries from now, when none of us will be here any longer, LaRouche’s name will be remembered with admiration and respect by all those who, like those of us here present, know how to treasure intelligence, knowledge, and love of the human species. (end video) 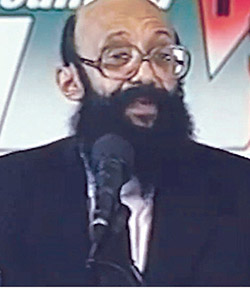 Dr. Enéas Carneiro (video): Who is Mr. LaRouche? Mr. LaRouche doesn’t stop at mathematics; he discourses with an exceptional fluency in matters of the physical world. Speaking with intimacy and profundity about the ideas of Gauss, Ampère, Øersted, and Kepler, and so many other great men of physics. When we turn to philosophy, the man is really something else! From Plato to Leibniz; from St. Augustine to St. Thomas Aquinas; Descartes, Spinoza. The depth of his analysis is enough to leave any of us with our mouth open. He speaks about ancient history as if he were seated on the sofa at Plato’s Symposium. It’s as if he had been sitting at their side.

He who reads Mr. LaRouche’s articles receives a refreshing shower of science, art, and philosophy. But, beyond such incontestable knowledge, what most impresses me about Mr. LaRouche, is his social concern. His concern for the fate of humanity. (end video) 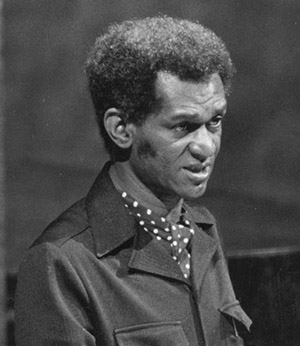 Another world leader who worked closely with LaRouche was the former Foreign and Justice Minister of Guyana from 1975 to 1978, Fred Wills, who was one of the most courageous leaders of the fight for a New World Economic Order. He called for LaRouche’s proposal for a new International Development Bank from the floor of the United Nations General Assembly on September 27, 1976, and in 1984 he became one of the founding board members of the Schiller Institute. 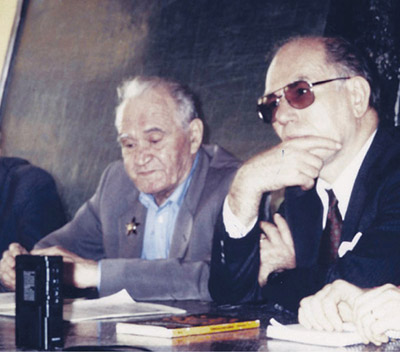 On matters of scientific physical economy, I cannot fail to mention the preeminent Russian scientist Pobisk Kuznetsov, who was discussed in an earlier presentation. Kuznetsov was so taken by his personal discussions with LaRouche in Moscow in mid-1994, that he shortly thereafter proposed that a unit of measurement of the physical economy, related to Potential Relative Population Density, should be named after him:

Pobisk Kuznetsov: Let us introduce the physical magnitude of a “larouche,” designated by La, which gives the number of persons who can be fed from one square kilometer, or 100 hectares, during one year. We share LaRouche’s view that the magnitude of potential relative population density can serve as an indicator of “intellectual culture.” 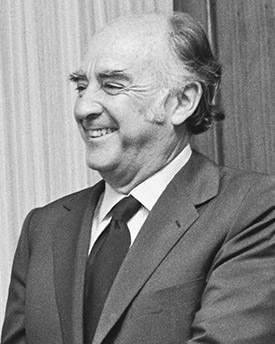 Our final “guest” is the former President of Mexico, José López Portillo. Over the period of his 1976-1982 Presidency, López Portillo grew to respect and admire U.S. statesman Lyndon LaRouche (with whom he met personally on May 23, 1982 in the Presidential palace in Mexico City), and the Movement of youthful Mexican patriots associated with LaRouche, in whom López Portillo saw the best hope for Mexico’s future. As the ex-President himself put it in an exclusive EIR interview on September 17, 1998:

As President, I had a relationship with Mr. L.H. LaRouche of respect for his solidly independent and tenacious ideological position, which I share in large measure, largely because of the adherence he had achieved from a group of young Mexicans, whom I equally respect and admire.

(So, as I’m fond of repeating: If you want to educate a President, organize a youth movement.)

I would like to recognize the tireless and generous efforts carried out by Lyndon LaRouche, for whom I hope for the best as a pre-candidate for the Presidency of the U.S.A. I wish that his voice be listened to and followed by those in the world who have the grave responsibility of stopping this situation from continuing on its calamitous course, and I hope that his fellow U.S. citizens, who will elect their President in the coming elections, will give him their timely recognition and support.

And on December 1, 1998, López Portillo stated the following in response to the keynote address given by Helga Zepp-LaRouche at their joint seminar at the Mexican Society of Geography and Statistics, in Mexico City:

José López Portillo: I congratulate Lyn and Helga for these words, which impressed me especially because first, they trapped me in the apocalypse, but then she showed me the staircase by which we can get to a promised land. Many thanks, Doña Helga.

Doña Helga—and here I wish to congratulate her husband, Lyndon LaRouche— ... and it is now necessary for the world to listen to the wise words of Lyndon LaRouche. Now, it is through the voice of his wife, as we have had the privilege of hearing. How important that they enlighten us as to what is happening in the world, as to what will happen, and as to what can be corrected. How important that someone dedicates their time, their generosity, and their enthusiasm to that endeavor.

For my part, I fulfilled a period of responsibility, and I can report in a somewhat dramatic way what happens to national economies in an international financial order such as that which has ordered our affairs since Bretton Woods.