What Makes a Society Successful?

José Vega is a member of the LaRouche movement in the United States. This is an edited transcript of his presentation, as a voice-over video, to the second panel, “Earth’s Next Fifty Years,” of the August 14, 2021 LaRouche Legacy Foundation seminar, “On the 50th Anniversary of LaRouche’s Stunning Forecast of August 15, 1971: So, Are You Finally Willing To Learn Economics?” 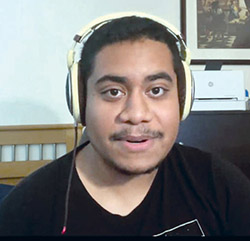 What makes a society successful? Let’s start with a quote from Lyndon LaRouche’s In Defense of Common Sense:

A swimmer is rescued from the sea, moments before his strength had ebbed fatally. This is momentary survival. Is this a paradigm for the successful survival of an entire society? How must we distinguish between merely momentary and durable survival?

To answer that question, let’s look at an example for each of these terms. Let’s start by looking at momentary survival.

When the pandemic first started, thousands became unemployed, businesses were forced to shut down and people were afraid of what was to come. One of the immediate resolutions passed was to give money to those directly affected by the Pandemic in the form of “stimulus checks.” These stimulus checks and unemployment checks were desperately needed so that people wouldn’t lose their homes, would be able to eat another meal, and could survive another day.

But can a society thrive on handouts alone? Of course not. A society requires its people to be productive.

The Mentality of Durable Survival

Let’s look at how the mentality of durable survival could’ve not only prevented mass unemployment, and death, but required a rapid mobilization of over a billion people.

Imagine, right when the pandemic started, you had an immediate response to build more hospitals, more sanitation facilities, more power plants—the same kind of actions implemented by President Franklin Roosevelt during the Great Depression. We would not only be prepared for this pandemic, but all potential pandemics in the future.

FDR had stated that every person, regardless of station, race, or creed, had “The right to adequate medical care and the opportunity to achieve and enjoy good health; The right to adequate protection from the economic fears of old age, sickness, accident, and unemployment; The right to a good education.” In his time, the General Welfare, along with public health, were mandatory commitments that the government was required to make to its citizens.

In this film, A Better New York City, produced in 1937 by the Works Progress Administration during the Roosevelt administration, we see the principles of a government focused on durable survival and how that attitude defines the present:

Throughout the five counties which comprise New York City, evidence may be seen of the permanent improvements brought about by a great program which has removed thousands from relief rolls.

On Governor’s Island, at the tip of Manhattan, important roads have been built, and several buildings have been reconstructed.

At the Brooklyn Navy Yard, a number of roads have been constructed and shops and warehouses are being built or improved. In this project WPA labor is being used, and funds and materials are being provided by the Navy Department.

At Sheepshead Bay in Brooklyn, improvements have been undertaken in which are combined many of the important features of the Works Program. An area which was formerly undeveloped, is the scene of a project in which employment is being provided for both skilled and unskilled workers. A long bulkhead was built to reclaim waters of the Bay. The sanitary facilities of the area were greatly improved by the extension and reconstruction of sewers. A boulevard is being constructed on the new land filled in behind the bulkhead.

In a federal art project, sculpture is being produced for schools and public buildings. Under the Works Program, artists, actors, writers, and musicians contribute their fair share to the culture of development of the community.

The highly-specialized art of creating stained-glass windows, mastered by few artists in the world, is fostered by WPA, and windows for the United States Military Academy at West Point. Here, too, a vast mural painting has been completed.

The Works Program has sponsored symphony orchestras and band concerts.

Artists, under the Works Program, make New York a better place in which to live. [End film clip.] 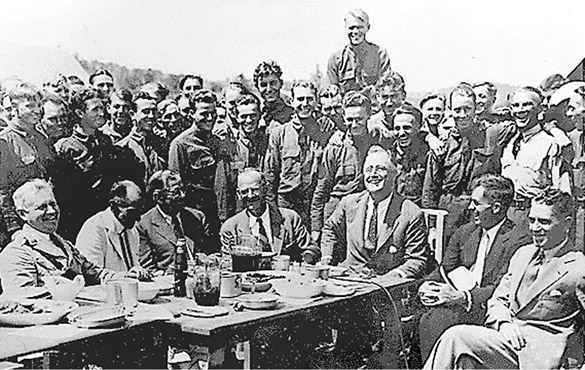 FDR Library
Youth from all over the country could be employed in space industries in a modern version of President Franklin Roosevelt’s CCC program. Shown is FDR visiting the Big Meadows Civilian Conservation Corps camp in Virginia, August 12, 1933.

What you just saw was an example of a country that had an idea of the future. And by implementing LaRouche’s proposals of a physical economy, we use our greatest resource, our creative minds, as a way to think of a future thousands of generations ahead of us, who will terraform not just our solar system, but other galaxies and distant bodies in our Universe. LaRouche, in his Four Laws, identified the need for a space program to increase the productivity of the entire labor force.

Taking from FDR’s CCC (Civilian Conservation Corps) program, the increase of participation of youth would be emphasized in a CCC-styled space program. Youth, from all over the country, would be employed in building rockets, building satellites, and discovering new frontiers of our universe that we don’t even know exist! This program could be exported globally in the form of modular science cities, which could easily be built across the entire world.

These cities would be powered by nuclear power plants, and we would equip these cities with clean water, sanitation, public health, and education. The fact that over two billion people currently don’t have access to clean water, and over 2.5 billion face some degree of food insecurity, is a moral failure on our part, and must be remedied immediately.

[Begin film clip:] In the knowledge that we are providing healthy bodies and sound minds for our future citizens, as well as in the more concrete construction projects, we find assurance that we are building a firm foundation for a bright future. Long after Depression is forgotten, these permanent improvements will remain as part of a better future. [End film clip.]