Only Facing the Truth
Will Secure the Future 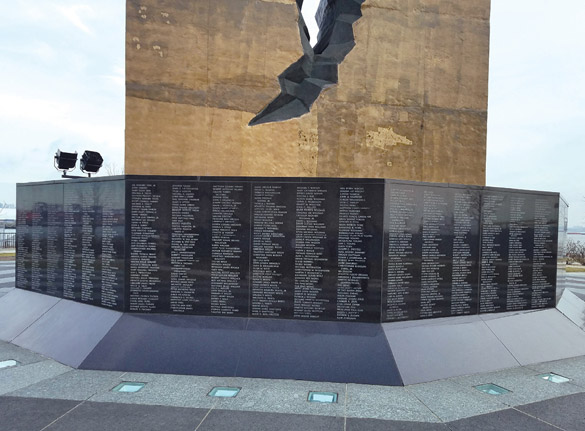 EIRNS/Michelle Erin
The Teardrop Memorial, Harbor View Park, Bayonne, New Jersey. Inscribed in its base are the names of the victims of 9/11.

Sept. 4—As we approach the 20th anniversary of the 9/11 attacks, the time has come for Americans to demand to know what really took place, and who was responsible for the death of thousands of Americans, and the subsequent slaughter of millions of innocents in a series of endless wars, launched ostensibly to prevent future attacks. It is time to muster the courage to finally remedy what Lyndon LaRouche called our “humiliation, for not acting, when that action was needed”—namely the action to know the truth about 9/11 and to bring the actual perpetrators to justice. Our failure to do that over these 20 years, has led to the destruction of entire nations, including our own nation, for a mission—as we can see clearly now with events unfolding in Afghanistan—which will never be accomplished by military means.

What people are calling today, “the Afghanistan crisis” is not an “Afghanistan crisis.” It is rather a difficult admission of a failed policy which is finally ending. It is the devastating reminder of our failure to demand truth in the aftermath of 9/11, but instead, like Shakespeare’s Hamlet, blindly plunging our sword into a curtain, without bothering to investigate what was concealed behind it. The perpetrators of the 2001 atrocities included networks of British, Saudi and treasonous Americans, not the storied bad guys in bat caves in Afghanistan.

Unexpectedly, President Joe Biden has now taken a critical step toward revealing the truth with his September 3, 2021 Executive Order, mandating the Justice Department, the FBI and other relevant agencies to conduct a declassification review of the withheld documents regarding September 11, 2001, and to release them over the coming six months. Biden’s September 3 statement identified that he had made that as a campaign promise, and “now I am honoring that commitment.”

The family members of 9/11 victims and survivors of the attacks had widely publicized their desire to exclude President Biden from any 9/11 memorial events, unless he, unlike his presidential predecessors, honored his promise to release these files. These families have sought all along to bring out the truth, including through legal action against the Saudi government, but have met obstruction all the way. On August 6, nearly 1,800 Americans, including family members who lost loved ones, first responders, and survivors of 9/11, issued a letter calling on Biden to absent himself from the 9/11 anniversary events in New York, in Shanksville, Pennsylvania, and at the Pentagon, unless he acted to release the long-withheld documents.

The families’ statement reads, in part:

We cannot in good faith, and with veneration to those lost, sick, and injured, welcome the President to our hallowed ground (Shanksville, PA), where the passengers fought the Saudis and crashed the hijacked plane. Since the conclusion of the 9/11 Commission in 2004, a good deal of investigative evidence has been uncovered implicating Saudi government officials in supporting the attacks. Through multiple administrations, the Department of Justice and the FBI have actively sought to keep this information secret, and prevent the American people from learning the full truth about the 9/11 attacks. 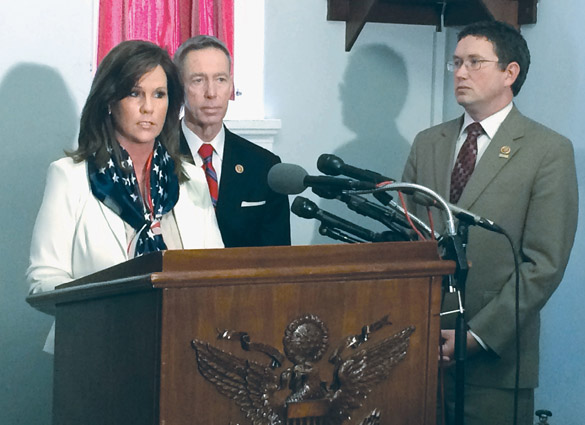 Following Biden’s new Executive Order on disclosures, Mrs. Terry Strada, a prominent leader of the 9/11 families whose husband Tom was killed at the World Trade Center, issued a statement that, “There is much more work to be done to secure justice for our murdered loved ones, and to rectify the immense damage the 20-year shroud of secrecy has caused.” But she expressed hope that the goal of justice will be achieved.

The crime that occurred on September 11, 2001, was in the making for decades, even if the specific form it took was planned only a few years ahead. At the beginning of 2001, on January 3, before the questionable November 2000 presidential election had even been certified, Lyndon LaRouche, in a public webcast, warned that the mooted nomination of John Ashcroft for Attorney General, by likely President-Elect George W. Bush, indicated the desire for a “Reichstag Fire’’ event. An emergency would be contrived and perpetrated, so dire, that selected Federal authorities—complicit in the contrivance, could declare “emergency orders,” as Hitler did with his Notstandsverordnung.

Later, on the morning of September 11, 2001, LaRouche was on a pre-scheduled radio show with the popular Salt Lake City radio host Jack Stockwell. Just as the program opened, the first plane crashed into the World Trade Center, followed soon after by the second. LaRouche said that blaming this on Osama Bin Laden would be a mistake, and that one must investigate high levels of the U.S. command to find out who was responsible. (See the full interview in this issue.)

Frankly, the 24-hour brainwashing network, CNN, has gone over the edge. The terror-bombing and mass-killing have pushed CNN, and many others, into the state of mind of the man, who, returning home to find his house has been robbed, takes out a shotgun and obliterates the neighbor’s cat. Indeed if his wife had said, “Henry, it’s just the neighbor’s cat,” the maddened fellow would have threatened her, “Don’t get in my way, or I might have to kill you, too!”

The United States has been surprised by a mass-murderous attack from rogue forces deployed from within the U.S.A. itself. Since no foreign power has the ability to do to us what was done this past Tuesday, some rogue element operating within our military-security establishment is the only possible principal author of what has just occurred.…

We must defend ourselves, our nation, against that rogue; anything we do to shift the blame to foreign forces which were not capable of organizing Tuesday’s attack, simply makes our nation more vulnerable to the rogue from within who has just done this and is lurking ready to do more.

Cowardly lunatics like the CNN organization, prefer to obliterate the cat, “for revenge,” rather than mobilize to defend the nation against the rogue from within....

It is time to make certain that the advisors of President Bush are not the sort of cowardly cowards who would rather obliterate helpless, innocent, brown-skinned people, in various distant parts of the world, than face up to the awful reality of the murderous menace of the rogue lurking within our own ranks….”

LaRouche’s warning was ignored, and the orchestrated “response” to 9/11 was launched, beginning with the Afghanistan invasion, followed by the creation of a surveillance state, where Americans were expected to tolerate being spied upon 24/7, in the name of “fighting terrorism.” Not often mentioned, but equally important, were the financial operations behind the scenes, where some individuals and corporations literally “made a killing,” raking in billions of dollars. For twenty years, we have looked the other way, not wishing to see the evil, and face what our nation has become, and what has been done in our name to destroy the lives and livelihoods of billions of people.

Today, we have more than conjecture to support LaRouche’s analysis. We have the courageous work of the former Technical Director of the National Security Agency, Bill Binney, celebrated in the film documentary, “A Good American,” for putting his life on the line to show who was likely responsible for allowing 9/11 to occur, including then NSA Director, Gen. Michael Hayden, among others.

At NSA, Binney and his team had developed a surveillance system known as “Thin Thread,” operating within Constitutional parameters, which would have discovered the plot in time to stop it. His system was inexplicably shut down a month before the attacks. Former CIA Analyst Ray McGovern fully supports Binney’s view that 9/11 was preventable and that more than an intelligence failure was at play here. (See Dennis Speed’s article, “The Fraud of the Russian Hack, and How 9/11 Could Have Been Prevented,” in EIR, September 22, 2017.) 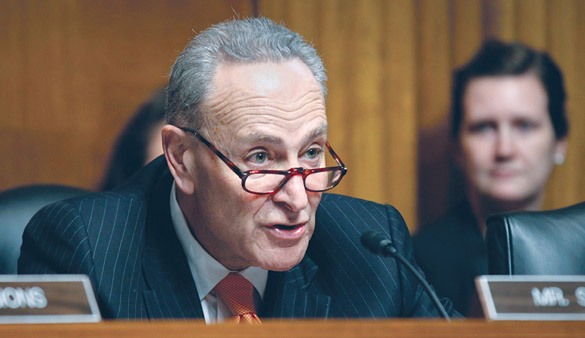 DoD/Glenn Fawcett
Senate Majority Leader Chuck Schumer (D-NY), who consistently opposes getting to the truth of 9/11.

In opposition to getting to the truth, we have the role of Senator Chuck Schumer (D-New York), Senate Majority Leader, who is on record supporting the Bush Administration’s endless wars, including in Afghanistan, where the failure was, as McGovern has said, inevitable from the beginning. Schumer further supported the cover-up of the investigation of 9/11 by Robert Mueller, who was FBI Director from September 4, 2001 to 2013. The cover-up never identified any British networks, Saudis, or Americans under FBI protection, as responsible for what transpired.

If we wish to redeem ourselves and the noble mission of our Republic, for which so many have paid the ultimate price, we cannot continue on the course of the last 20 years. We must re-dedicate ourselves to the principle of the “general Welfare [for] ourselves and our Posterity,” as stated in the Preamble of our much-abused U.S. Constitution. Such dedication would never allow a crime like that committed on September 11, 2001 to remain cloaked in darkness while exacting a horrible penalty on innocent people and nations not remotely involved, including our very own dedicated soldiers and first responders.

Against the backdrop of Lyndon LaRouche’s prescient strategic overview, people like Bill Binney, Ray McGovern and others could tell us much about what occurred, but only if we have the morality to ask the right questions and the strength and courage to take the appropriate actions at long last.