In Tribute to Mikis Theodorakis 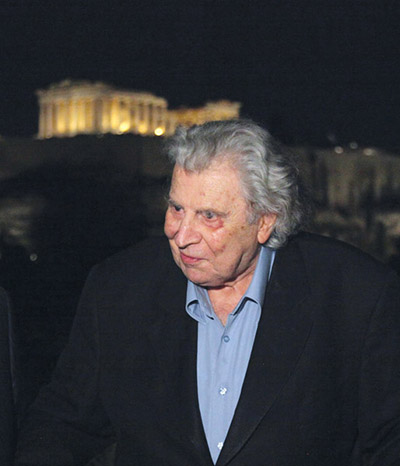 Office of the Prime Minister/Vasileios Filis, May 2010
“Art is the only power that can create within us a microcosm in perfect parallel with the Cosmos.” —Mikis Theodorakis

It is difficult to write an obituary for someone who has not died. Mikis Theodorakis may have left his body, but his spirit and his cultural work in the area of music will continue to enlighten humanity far into the future. So, for us Greeks, he will always be with us, He did not die; he cannot die.

I will not go into the details of his life and of his works. These are known and it would be necessary to write a thesis. Allow me to share my personal recollections of Mikis.

It was November 1986; I was Consul General of Greece in Istanbul at the time, and Turkey was still under the iron rule of the Evren dictatorship, and Istanbul was still under martial law. The Turkish composer Sülfü Livaneli had invited Theodorakis to give four concerts in Istanbul. I had expected that the authorities would not give permission for the concerts to take place, but the insistence of Livaneli paid off, and the concerts took place.

I attended the concert of November 30 that took place in the Istanbul opera house. All seats had been sold out, and the atmosphere was very lively. Police had surrounded the building, and many were afraid that violence might be provoked. The concert and the other three that followed were a fantastic success because the songs promoted the need for Turkey to go faster with democratic reform that the civilian Prime Minister Turgut Özal was pushing. The joint singing of Theodorakis and Livaneli created an atmosphere of Greek-Turkish friendship that became still more apparent after the concerts, and continued even during the crisis of March 1987, which brought the two countries to the brink of war.

At a dinner I hosted for him at my residence, Mikis told me that the aim of these concerts was exactly that—to weaken the iron grip of the Turkish military regime and enhance democratic progress, and to promote and consolidate Greek-Turkish relations. To this effect he established with Livaneli a Greek-Turkish Friendship Association. Prominent Turkish intellectuals and writers like Yašhar Kemal and Azis Nesin participated also. Theodorakis was enthusiastic about his visit and contacts with his Turkish friends, and he was happy to pursue his dream of bringing closer the people of the two countries.

I met him again in 1994. I was then heading the diplomatic office of the alternate Minister of Foreign Affairs, and I had to brief Theodorakis on the situation in Turkey, since he was going to visit Ankara this time, and try to smooth out relations between the two countries. It was a private initiative and the Ministry tried to help him as much as possible. Theodorakis in our conversation continued to maintain the spirit of November 1986, as I tried to explain to him the many changes that had taken place since then.

He had a fantastic personality. He was a fighter, a visionary and a creator of art in the form of high-quality music and opera.

He will never be missed because he will always be with us.