by Richard A. Black, Schiller Institute Representative at the United Nations

Sept. 12—Today in Bayonne, New Jersey, the Schiller Institute, with the support of the Embassy of the Russian Federation in Washington, D.C. and the Russian Consulate in New York City, organized a memorial ceremony on the occasion of the 20th anniversary of the 9/11 mass terrorist attack on the United States. It was held at the towering Tear of Grief monument, just across the Hudson River from the Twin Towers site in Manhattan, where the terrorist attack began. The Tear of Grief monument, designed by Russian sculptor Zurab Tsereteli, was given by the Russian government and people as a gift to America in 2005, in sympathy and in support of the families and survivors of the 9/11 attack.

EIRNS/Jenny Burns
The Schiller Institute, with support of the Russian Embassy and the Russian Consulate, organized a memorial ceremony following the anniversary of the 9/11 attacks on the United States, September 12, 2021.
View full size

The master of ceremonies was Fireman Michael Pelliccio, from the City of Bayonne Fire Department, which provided its honor guard, joined by that of the City of Bayonne Police Department, and by the New York City Police Department Ceremonial Unit Color Guard. Extraordinary music, including the national anthems of the United States and Russia, was provided by the Schiller Institute NYC Chorus, and by soloists Kevin Maynor and New York City police officer Kevin Shaw. 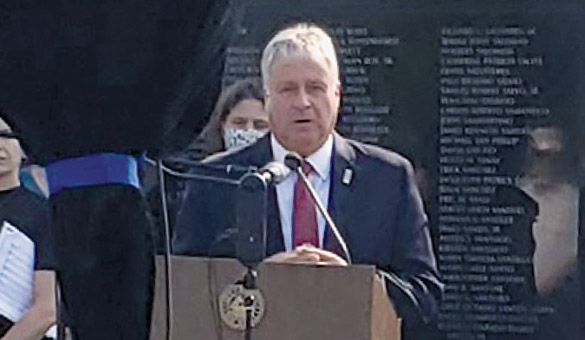 EIRNS/Eli Santiago
Among the many speakers were Terry Strada; Consul General Sergey Ovsynnikov of the Russian Consulate in New York; Kirk Wiebe; Jimmy Davis, Mayor of Bayonne (above); and Keith Weaver, Chief of the Bayonne Fire Department (below).
View full size 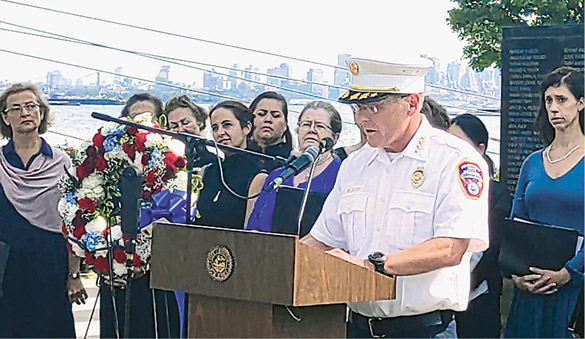 Among the many speakers were Terry Strada, national chairwoman of 9/11 Families and Survivors United for Justice Against Terrorism; Consul General Sergey Ovsyannikov of the Russian Consulate in New York; Bayonne Mayor James M. Davis; Bayonne Fire Chief Keith Weaver; and Kirk Wiebe, former Senior Analyst at the National Security Agency. Messages were read from Schiller Institute President Helga Zepp-LaRouche and from the President of the Russian Academy of Arts, Zurab Tsereteli, the sculptor.

An important message was sent by the Russian Federation’s Ambassador to the United States, His Excellency Anatoly Antonov. The Ambassador’s message concludes:

The 9/11 tragedy has shown that terrorism is a common global threat. Any attempts to create isolated “islands of security” in the modern inter-connected world are ephemeral and doomed to failure. The victory over terrorists can be achieved only through joint efforts of the entire international community. There is no place for carelessness and double standards in this regard. It is unacceptable to divide terrorists into the good and the bad.

Vladimir Putin as well as Foreign Minister Sergey Lavrov have stated multiple times that cooperation in counterterrorism meets the interests of both Moscow and Washington. Interaction in this sphere can save the lives of hundreds of people.

The Tear of Sorrow monument testifies to the unity of our peoples in the face of the global terrorist threat. This memorial epitomizes grief, which the Russians share with the Americans.

EIRNS/Jenny Burns
Diane Sare directed an ensemble from the Schiller Institute NYC Chorus in renditions of the national anthems of the United States and the Russian Federation.

Bayonne Fire Chief Keith Weaver, in his remarks, discussed the common values of the American and the Russian people in the face of great challenges, and concluded by saying, “God bless the Russian Federation and God bless America.”

A 55-minute video of the ceremony has been made available by the Schiller Institute NYC Chorus, which performed the national anthems of both the United States and the Russian Federation: