The following interchange on the humanitarian crisis in Afghanistan, between Schiller Institute President Helga Zepp-LaRouche and Harley Schlanger, took place on the weekly strategic webcast of the Schiller Institute, on October 27, 2021. The full webcast is available here. 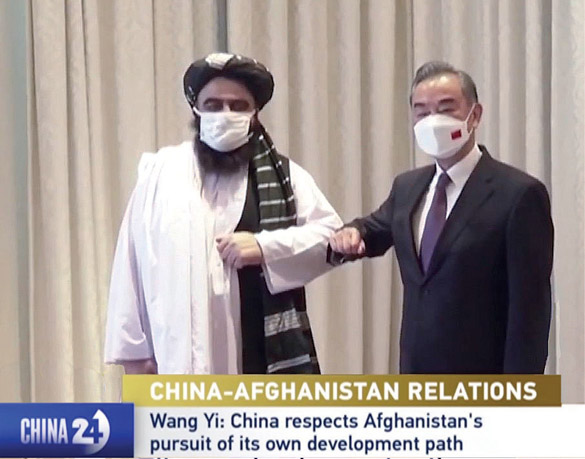 Harley Schlanger: Helga, you’ve mentioned a number of predicates regarding international policies of massive austerity. We’re already seeing the effects of this in Afghanistan and in Haiti. We’ve put out a call for unfreezing the funds, getting the money to Afghanistan. There are some actions being taken by Russia and China, but the West is still showing the cruelest indifference as the winter approaches, hunger approaches. What can you say about this situation?

Helga Zepp-LaRouche: It is getting more terrible, absolutely horrible, by the day! The World Food Program and the Food and Agriculture Organization have just put out new figures that right now there are 22.3 million people, out of 41.7 million, in acute danger of not making it through the Winter. This was reported by WPF executive David Beasley, and another person from the World Food Program, Jean Martin Bauer, said there are one million children in immediate danger of dying of hunger and cold.

And in light of that, the decision by the West—by the United States and by the Europeans—to keep the sanctions by freezing the assets of Afghanistan in the U.S. Treasury and in other banks, amounts to genocide! First of all, these are monies which belong to the Afghan people and withholding this money, when you have what is now called the biggest humanitarian crisis on the planet—and we’ll come to Haiti in a second [and] Yemen, Syria, South Sudan, Ethiopia and all these other countries that are in such dire conditions—but Afghanistan tops them all. And by withholding the funds, with the argument that one doesn’t want to stabilize the Taliban, it amounts to people being killed by the millions!

We have been talking to many people from Afghanistan, many of them just were in Afghanistan, and say you can actually talk with the Taliban because they have an absolute interest to stabilize the situation. So, the whole propaganda that one cannot talk to the Taliban is completely wrong.

Furthermore, by withholding the money which belongs to Afghanistan, you practically force the Taliban to increase the opium production because they have absolutely no money: What should they do? Drug production worldwide has been steadily increasing. From 2008 to 2019, opium production has increased by 80%; prices have gone up by 47%. The market, the numbers of drug users, continues to increase. The drug mafia always tries to stabilize prices, stockpiling excess production, and making the price cheaper so that more customers will come in, thus expanding the market. This is an absolute catastrophe. Estimates are that as many as 750,000 people may now have died or are expected to die worldwide this year of drug overdoses.

So, whoever is pushing the Taliban against the wall, has no concern for the people dying. Behind that, is a policy to make Afghanistan a hellhole, to be used as a source of chaos against Russia and China, in an effort to continue the policy of the Great Game, which was in fact just lost. NATO and the U.S. forces did not win in 20 years. It has been a complete failure. But clearly some people would rather continue this policy, rather than recognizing their mistakes and correcting the policy.

This is really cause for alarm. I can only say, if you have any concern for the poor people of Afghanistan, and world peace, work with us, with the Schiller Institute and try to change the policy in the United States and in the West on the Afghanistan question. Fortunately, Afghanistan’s neighbors, the Central Asian Republics, Pakistan, Iran, Russia, China, and India, all have a different attitude, but it is absolutely incredibly scandalous, what is happening here. 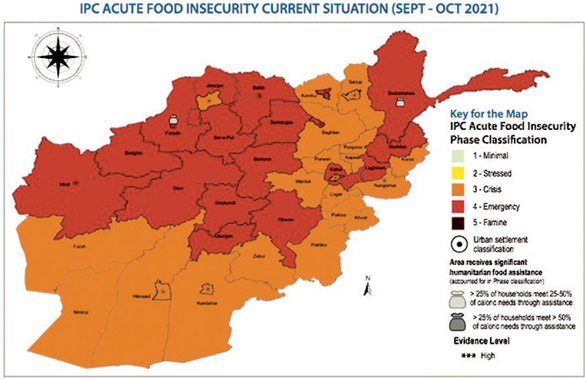 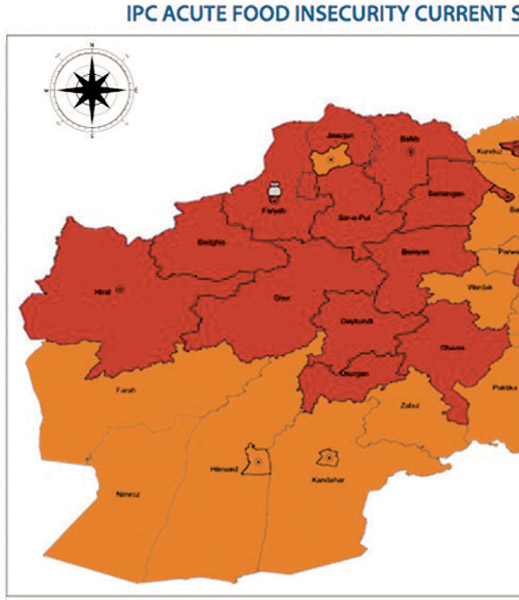 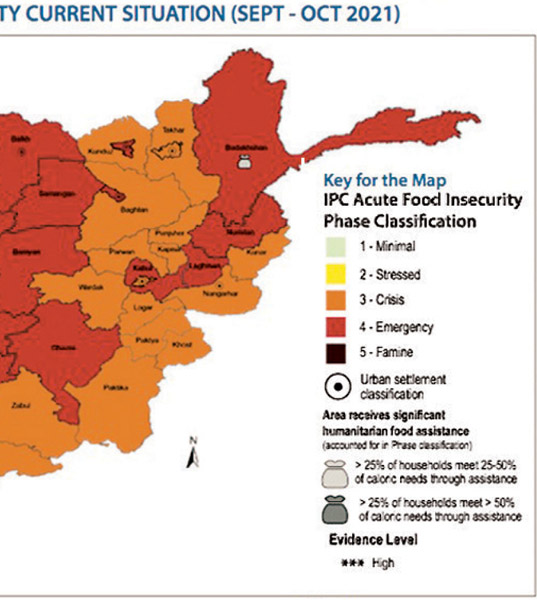 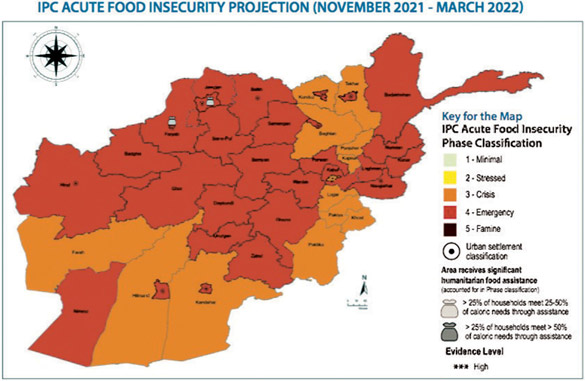 OCHA
These two maps (issued October 2021) show the extent and severity of food insecurity in Afghanistan in September-October 2021 (top) at the end of harvest, and how it is projected to worsen from November through March 2022 (bottom), called the “lean season,” if there is no mobilization to bring in sufficient, timely food aid, beginning now. The five categories of food insecurity—from minimal (1) to famine (5), shown in the light to dark tones—are identified in the key, from the IPC (Integrated Food Security Phase Classification), which is used by the World Food Program, the Food and Agriculture Organization and partners. Needed priority responses include scaled-up aid, pre-positioning of supplies in the IPC 3-5 areas, provision for winter wheat season (fertilizers, seeds) and livestock care.
View full size 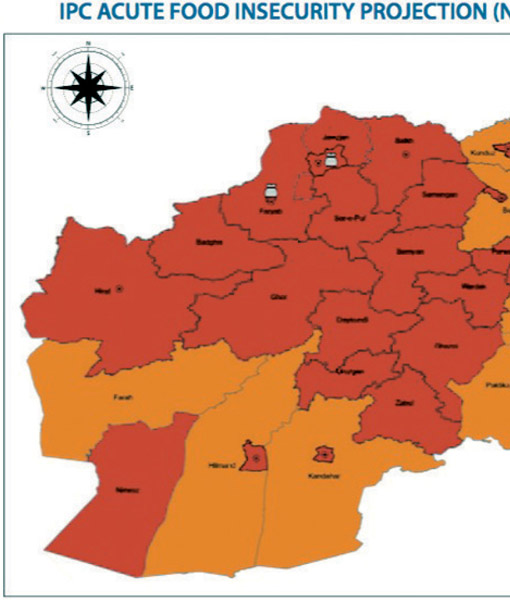 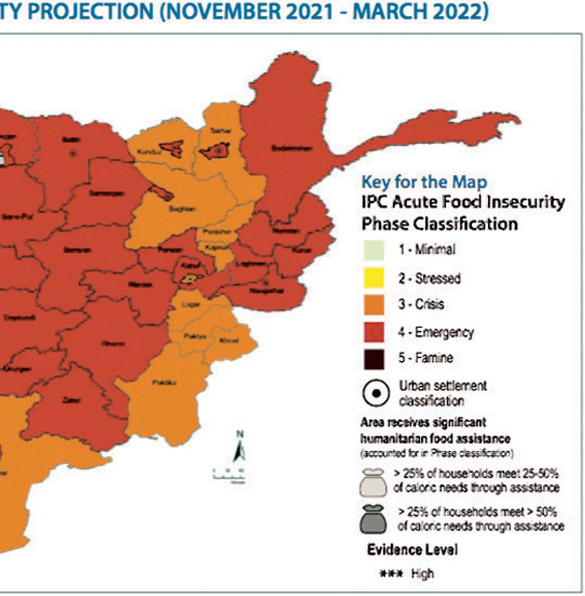