Brotherhood Is the Best Wealth

This is the edited transcript of the presentation delivered by Kirk Wiebe to Panel 1, “Can a Strategic Crisis Between the Major Powers Be Avoided?” of the Schiller Institute’s Nov. 13-14 Conference, “All Moral Resources of Humanity Have To Be Called Up: Mankind Must Be the Immortal Species!” Mr. Wiebe is a retired Senior Analyst of the National Security Agency (NSA), and is currently a member of the Veteran Intelligence Professionals for Sanity (VIPS). Subheads have been added. 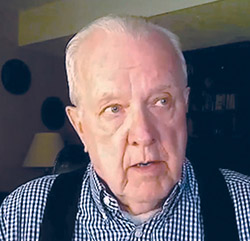 Hello. My name is Kirk Wiebe. I am a longtime member of the Veteran Intelligence Professionals for Sanity, often referred to as VIPS. As that name implies, we are deeply concerned as to how intelligence failures, as well as manipulation of the truth, can lead to catastrophic consequences. This happened with the Iraq War of 2003. Earlier it happened with respect to not preventing 9/11, which led to the 20-year Afghanistan War.

I and Bill Binney resigned from the National Security Agency on October 31, 2001, because we were prevented from using means readily available to us, prior to 9/11, that would have prevented those terrorist attacks from occurring. We were prevented by corrupt elements of our intelligence community, and our government, which have never been held accountable. Trillions of dollars and millions of lives on both sides of the resulting wars have been lost.

More importantly, the world has become less safe, not more safe, over the past 20 years. I believe that any talk of potential military confrontation or war with Russia, China, or other nations must now be thoroughly discussed with the American people, as it never is, and by those, such as myself, in a position to reveal the true way these decisions are made—decisions which are often the opposite of those in the true interest of the United States itself.

In my time at the National Security Agency, I specialized in intelligence pertaining to Russia. Four years ago, Bill Binney and I, at the height of the Russiagate hoax, came to New York City and discussed our view that the story that Russia hacked the Democratic National Committee was in no way corroborated by evidence. The case of Julian Assange, we contend, and in a different way, the case of Ed Snowden, if allowed to be heard by the people of the world, especially the grossly uninformed American people, would clear up mysteries. There is in my view no sign that Russia, and I very much doubt that China, wants a war with the United States. But there is also no doubt, that if the events of 9/11 had been prevented, as I, Bill Binney, Diane Roark, and others know they could have been, that the Afghanistan tragedy, the Iraq tragedy, and other lethal expeditions, including our roles in Libya and Syria, would not have been supported by the American people.

In conclusion I would like to say to my Russian counterparts, what I recently said at a 9/11 memorial ceremony at the Teardrop Memorial, located in Bayonne, New Jersey and dedicated by the nation of Russia to the United States in memory of the victims of 9/11.

Dear Russian Friends—I would like to say the following:

We are all gathered here in an atmosphere of brotherhood, friendship, and—yes—love. We Americans sincerely thank you for such a wonderful, beautiful, and inspirational monument—a memorial to all those who died or were wounded on that tragic day 20 years ago. Know that we constantly stand with you as fellow journeymen in the fight for truth and in the fight against terrorism. Thank you for your attention.