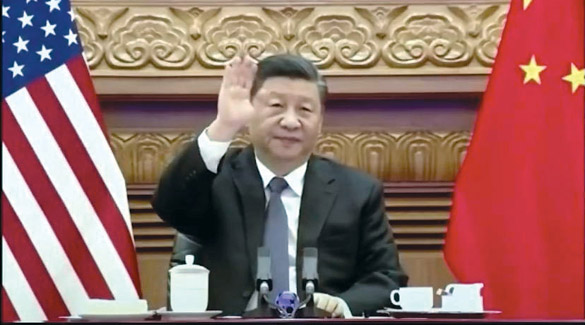 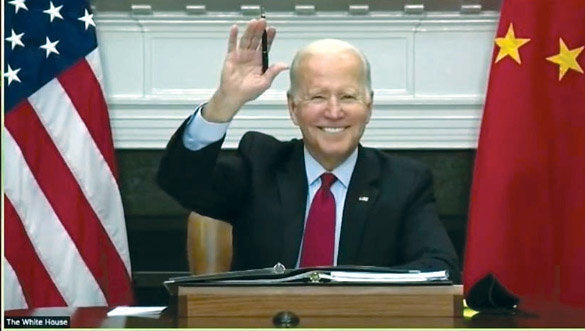 Both photos: White House
Will the video meeting of Presidents Joe Biden and Xi Jinping on Nov. 15, 2021 help ratchet down the growing tensions between the two major nuclear weapons powers?

Nov. 20—With U.S. air and naval forces increasingly deploying along China’s border in the South China Sea and passing regularly through the Taiwan Strait, and after the U.S., the UK, and Australia launched an extremely provocative military alliance (AUKUS) in September, openly aimed at “containing” China, a video meeting between U.S. President Joe Biden and Chinese President Xi Jinping on Nov. 15 (Nov. 16 in China) helped ratchet down the growing tensions between the two major nuclear weapons countries. While the meeting was not expected to resolve any of the outstanding disputes between the two countries, it did open a pathway to deal with them through further discussion at a variety of levels.

The Biden-Xi discussion lasted an entire three-and-a-half hours, longer than anyone expected, ending at midnight for President Biden (because of the time difference). According to a readout of the meeting by U.S. National Security Advisor Jake Sullivan, it was quite free-wheeling and open, not scripted, and not simply a give-and-take discussion. In greeting Biden, Xi called him an “old friend.” Biden avoided the term, which may have been a “third rail” for his Republican opponents, but expressed clear delight at having this conversation, which the U.S. side had been most eager to arrange.

Both leaders used the opportunity to express their concerns about the actions of the other. Biden went through the usual litany of U.S. “concerns” about China, including the “old saws” of human rights issues in Hong Kong, Xinjiang, and Tibet, as well as supposed Chinese aggression in the South China Sea. President Biden also underlined the U.S. commitment to assert “its values” in the international arena.

A good deal of the discussion, both sides noted, was focused on Taiwan. On October 26, Secretary of State Antony Blinken had issued a statement encouraging all members of the United Nations “to join us in supporting Taiwan’s robust, meaningful participation throughout the UN system and in the international community,” which came very close to breaching Beijing’s “red line” of calling for Taiwan independence, threatening China’s sovereignty over all of China.

In the virtual meeting, President Biden expressed his own concern that the heightened tensions between the two could well lead to “unintended consequences” such as a military conflict. But, importantly, Biden reiterated his support for the “One-China policy” and opposition to Taiwan independence. He added, however, that should the status of Taiwan be changed by force, this would cause a serious reaction from the United States. He said that it was necessary therefore for the two sides to set up “guardrails” to prevent the dispute from spinning out of control.

President Biden also reiterated that the U.S. was not interested in changing the Chinese system and claimed that the ongoing revitalization of U.S. alliances was not aimed against China.

President Xi, while asserting that Taiwan was in fact a part of China, said that China was committed to a peaceful resolution of the conflict, which is, in China’s eyes, simply a continuation of an unfinished civil war. President Xi said:

We have patience and will strive for the prospect of peaceful reunification with utmost sincerity and efforts. That said, should the separatist forces for Taiwan independence provoke us, force our hands, or even cross the red line, we will be compelled to take resolute measures.

The two were in agreement that the U.S.-China relationship was the most important in the world and that navigating the choppy seas, as Xi put it, required that the commanders keep a steady hand on the rudder. Xi said:

The most important event in international relations in the coming 50 years will be for China and the U.S. to find the right way to get along. History is a fair judge.

According to Sullivan, the two sides agreed to create four “buckets” for cooperation. The first bucket is on climate and public health, a matter that President Xi has made into a major initiative, both with regard to getting vaccines to the rest of the world, including vaccine production capacities, and creating a global monitoring service to keep closer watch on latent viruses in order to stave off a future outbreak.

The second bucket is collaboration on the issues of the Iran nuclear program and the North Korean nuclear issue.

Thirdly, the two sides would work to create a mechanism for managing their differences in security and other areas. The two agreed that there should be an intensification of communication between the two sides on a variety of levels.

And fourthly, there should be cooperation on the issue of trade and energy.

Shortly after the meeting, China indicated it would release some of its oil reserves, helping to keep down the price of oil on the world market, something that President Biden had reportedly also raised in their meeting.

Both Presidents Xi and Biden said that they were looking forward to meeting with each other in person as soon as Covid restrictions permit. With the successful conclusion of what was called by the two parties a “fruitful discussion,” it is to be expected that discussions will begin at lower levels as well. Trade discussions are already well underway, and one should also expect that the hiatus in high-level discussions between the two militaries will also be resumed.

One positive sign already was the decision the day before the presidential meeting that the U.S. and China would again exchange journalists on a mutually agreed basis. The anti-China propaganda in the U.S. had included labeling Chinese journalists as agents of the Chinese “regime,” with severe restrictions imposed on their ability to do their work as journalists. This had been followed by a tightening of visa restrictions, which led to an exodus of many journalists back to China. China retaliated in kind against some of the U.S. journalists working in China. Now both sides have agreed to issue regular one-year multi-entry visas to journalists.

In Europe, where U.S., UK, and NATO saber rattling for military confrontation with Russia has been equally as dangerous as that with China over Taiwan, the leaders of France and Germany, on the same day as the Biden-Xi meeting, took significant steps to cool down the two hot spots in this theater—the Belarus-Poland border and Ukraine. 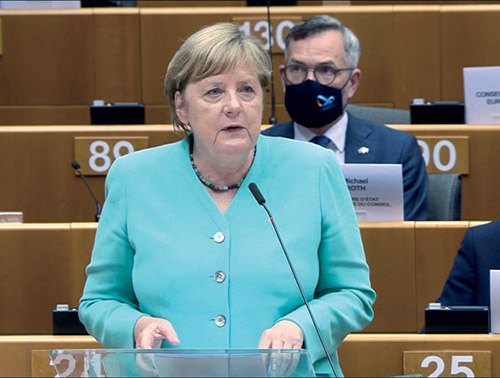 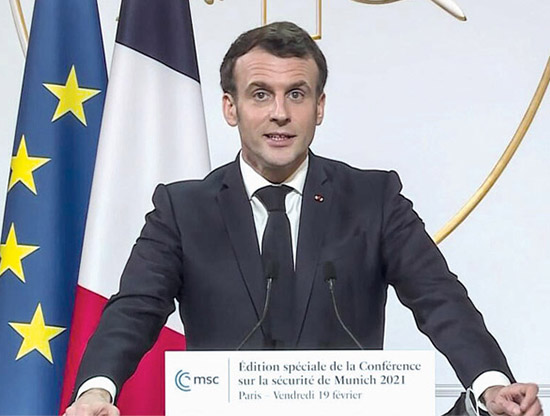 German Chancellor Angela Merkel spent nearly an hour speaking with Belarusian President Alexander Lukashenko about the migrant crisis on the Polish border, which the war party is using to provoke a color revolution against the Belarus President and potential military action against both Belarus and Russia. Merkel’s call was a serious blow to the effort by the European Union (EU) to portray Lukashenko as an illegitimate President, claiming vote fraud in the August 2020 election, which was won overwhelmingly by Lukashenko. Despite howling from some in the EU, including within Germany, Merkel called Lukashenko a second time on Nov. 18.

It is of note that the majority of the migrants trying to get into the EU from Belarus are refugees from the illegal regime-change wars in Iraq, Libya, and Syria, and that Poland also contributed to the Iraq war.

Also, on Nov. 17, French President Emmanuel Macron spent one and three-quarter hours on the phone with Russian President Vladimir Putin, addressing the Belarus-Poland border crisis, but also other hotspots, including Ukraine and Libya. Both the U.S. and the UK are accusing Russia of “aggression” for deploying troops on its own territory, supposedly too close to the Ukraine border. In another major provocation, the U.S. provided new large arms shipments to Kiev, while UK Defense Minister Nick Carter visited both Ukraine and Poland, with unconfirmed reports that London may deploy military forces to Ukraine.

While none of the underlying disputes threatening world peace have been at all resolved by the Biden-Xi meeting, nor by Merkel and Macron’s efforts to pull back from the brink, they have at least laid the basis for a pathway forward. All these major crises could, and must, be resolved on the basis of a Westphalian approach, one in which all sides take into consideration the “good of the other.” This was the subject of discussion in the First Panel of the Schiller Institute Conference on Nov. 13, under the title “Can a Strategic Crisis Between the Major Powers Be Avoided?”

Edited transcriptions of the presentations and discussion session of Panel 1 of that Schiller Institute Conference are available here. 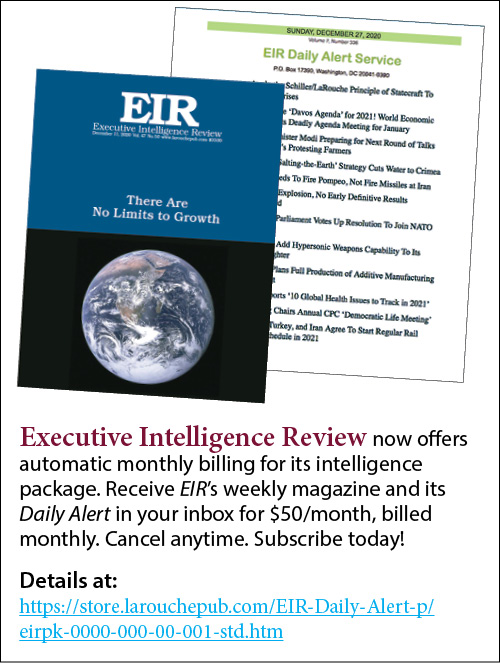