This is the edited transcription of the video presentation by Alf Schmidt, delivered in German with English interpretation to Panel 2, “The Science of Physical Economy,” of the Schiller Institute’s Nov. 13-14 Conference, “All Moral Resources of Humanity Have To Be Called Up: Mankind Must Be the Immortal Species.” Mr. Schmidt is an independent farmer, who has led farmers’ demonstrations in Berlin, Germany. Subheads have been added. 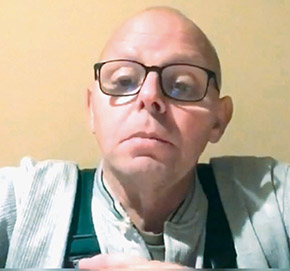 Greetings. My name is Alf Schmidt, I am 56 years old, and run a sheep farm. I’m a pasture sheep farmer. We manage 100% nature reserves with our animals, but we’ll get to that later.

Well, I’ve been thinking about this. And I have a question. Just over 100 years ago, there were 1.6 billion people on this planet. That’s now the number living in India or China alone. Because we are now almost eight billion people. That means an annual increase of about 70 million people. Seventy million people who want to eat and drink. And what is happening in the world? Four hundred-eighty million are hungry, three-four million die of hunger every year. And Europe and Germany are decadent to the hilt. A policy is being pursued that is beyond imagination.

There’s one thing we haven’t experienced in Germany—that’s hunger. At least not in the last 50 years. I sometimes have the feeling that this is what the Germans or the Europeans are lacking: Starvation—a week of hunger, a little bit of fasting—to see or maybe to get to know that food doesn’t grow at Aldi, Edeka, Kaufland supermarkets and the like, but has to be produced by the hard labor of farmers.

When I then see that in the next ten years another billion people will be added, when I see how many from Africa and elsewhere are fleeing poverty, fleeing hunger, fleeing wars, and when I then see our policy, then I just get sick to my stomach. Germany has, I think, about 8% FFH (Flora-Fauna Habitat) areas. These are areas designated under the 1992 EU Habitats Directive to protect the habitats of wild fauna and flora, areas that are particularly worthy of protection. That’s okay. I have an area here, and an area there, and in between I have fields or pastures or forests.

And now the EU comes along and says: Germany, you have violated a rule. We have determined that 20% of your total area will be FFH areas. (That’s how I remember it.) That means we have something worth protecting here of 8%. How do I get to 20%? I take the best acreage in between and make an A-to-B corridor. Decadence says hello. That means the best arable land, which is optimally managed with the most modern methods, with the most modern technology, is now being converted into FFH areas. That means 20% of our land remains free, worthy of special protection.

But the theater continues. Because it is still possible to produce in FFH areas, but we then have to contend with the insect protection law. This insect protection law is a special joke, because it doesn’t even know which insect it is supposed to protect! It also doesn’t know how the insect should be protected, because we don’t know which one we want to protect! It doesn’t know anything, actually. We asked our politicians in Berlin: The Insect Protection Act: Why do you want to enforce it? What is it, actually? What is this shit? The answer: It’s in the coalition agreement, the SPD demanded it. Then I have to take 1.4 million hectares out of production—because of an insect protection law.

At certain times, there were over 1,000 farmers with their tractors in Berlin. We demonstrated for 80 days starting January 25th this year in Berlin at –18ºC, and with the Corona virus. We suffered everything, endured everything. Even our politicians! Well, I can testify about that, because I registered this demonstration. Over the entire time, over the entire term. I have experienced hardships beyond imagination.

But we have also achieved something. We have managed to ensure that, for example, bird sanctuaries can continue to be supported through agricultural subsidies, because I have a sheep farm in a bird sanctuary, which are also sometimes nature reserves, which are grazed by my sheep, kept free for ground-nesting birds, and for all kinds of things. That, supposedly, should no longer have been supported. That means I would have received no more money; only paid rent for the lambs. We have not been earning enough to cover our costs for a long time anyway. That means I would have had to stop sheep farming, but the agricultural area which is not being used for grazing is being used for soy, for bio-healthy drinks and whatever sewage there is.

Sorry, that’s my opinion. I always have to say that. At some point I’ll be punished for it.

So, this area would have been taken out of production. Areas where, without disturbing anyone, we produce meat as part of landscape management!

Germany has found another means to abolish agriculture: wolves. In Scandinavia, I think in Finland, Sweden, Norway, there are altogether 400-500 wolves. Germany alone now has well over 2,300 wolves, and that’s with our densely populated areas. A study for the Ministry of Environment says Germany is ready for 20,000 wolves. As I said, we already have well over 2,000, but we’re ready for 20,000.

I’ve still found few wolves that eat carrots anywhere. Well, they go for feral animals, but they also go into the grazing animals.

My farm used to have 2,500 ewes. We raised 1.64 lambs per ewe. Anyone can do the math, about 4,000 lambs a year. Then came the wolves. We had over 200 attacks. The worst damage is actually not the damage from the bite and from killing one or two animals. That would still be tolerable. The worst damage is the psychological damage to the sheep—unimaginable. Afterwards, they run against the wall in the barn, if you put them in there. They don’t eat anymore, they die. That means we then went from 1.64 lambs per sheep per year down to 0.53. Our stock has been decimated to just over 1,000, because I’m only reimbursed for the one sheep directly killed.

We had an encroachment of wolves: 74 sheep trampled each other, to death, on the run. You have to imagine, a corridor through which over 2,000 sheep have to pass. Whoever stumbles, loses. We lost 74 sheep in one day. And we were told: Sorry, no wolf DNA, no compensation. Then so many died afterwards from internal injuries. The sheep pushed out the fetuses as they ran away. I could show you pictures that would make me cry again.

That is the situation in Germany.

Meanwhile the wolves also go to the cattle, to the horses. And what is the state doing? We have put pressure on it. There is now a little compensation for sheep farming, but not much. So, my damage, my total damage, with repayment of subsidies—because a broken herd can no longer manage land—in recent years was just under a million. If I extrapolate everything—the loss of animals, and, subsidy repayment, loss of leased land and so forth—I come to a million euros’ damage by the wolves. We were actually screwed by the wolves. Excuse me, but I can’t find any other words to describe it.

That’s actually the next thing that’s going to ruin agriculture—with the wolf. And if the wolf doesn’t do it, then they also have bears. That’s how far we have gone in the meantime.

But as if this is not bad enough. Imagine: They just said, the federal states, for example where I am in Thuringia, the entire state of Thuringia was just declared a wolf protection area. That means, if tomorrow the wolf goes into a herd of cattle, and they run, from panic, on the road, and a school bus crashes and the children die, no one will say, “That was a wolf and that’s how nature is and that it is a higher force and that it’s actually not so bad.” No! the public prosecutor comes. And what does the prosecutor do? The prosecutor says the following: “You have a herd in wolf territory. The herd is not protected; they are to blame.” On top of the guilt that this animal owner is already feeling anyway, if he doesn’t go to the barn in despair and hang himself from the highest beam, he is also sued and he loses his business liability [insurance], and and, and, and.

Under the smoke screen of protecting nature, no one gives a shit anymore. This is happening in Germany. I’m sorry, but nature conservation is the biggest whore that is driven through the village. Under this guise, everything that is still somewhat normal here, that maintains the landscape, that operates clean pasture management, that operates clean agriculture, is destroyed. It’s destroying family farms, it’s destroying everything. It’s actually just causing more hunger. And every year, 70 million more are added.

I can’t think of anything else. I wanted to bring this addendum, but now I really have to go back to the barn.