Haiti and Afghanistan: Needed Lessons for Nation-Building, Not Chaos

Eric Walcott is the Director of the Strategic Partnerships at the Institute of Caribbean Studies in Washington, D.C. He spoke during the second part of Panel 2, “The Science of Physical Economy,” of the Schiller Institute’s Nov. 13-14 conference, “All Moral Resources of Humanity Have To Be Called Up: Mankind Must Be the Immortal Species!” 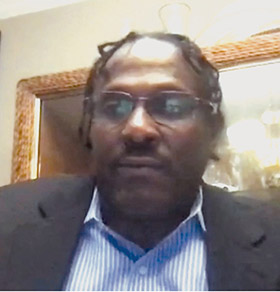 Well, the state of Haiti, as it currently exists at this time: We are slowly descending into a state of total chaos. It has not gotten the support of the Organization of American States; it has not gotten the support of the United Nations; it has not gotten the support of CARICOM [Caribbean Community]. So therefore, you have a chaos in Haiti taking place, where you have petty gangs who are now stifling not only the economy, commerce. You have fuel lines, or fuel transport lines that have been somewhat hijacked by petty gangs led by G9 [confederation of nine gangs in Haiti—ed.]. You also have water that has now actually been stopped from getting from point A to point B. Most people who know Haiti, they know that these water trucks go around the country and deliver water so that people can have potable water to drink, to wash clothes, and other things.

Earlier today, I had conversations with someone very close to the Prime Minister, and the message that was said was, “Enough with the promises. We need help, and we need help right now.” We need 300-400 U.S. military or international forces, whether it be from the United Nations, CARICOM or elsewhere, to come to Haiti, to help to restore law and order in the country. This cannot be done with the small police force in Haiti. It cannot be done. You have police who are facing all types of assault weapons, who have no type of protective gear whatsoever.

So, at this point, the message is, Haiti has answered the call from the inception of the U.S. War of Independence, and so forth—many friends throughout Latin America and the Caribbean, as far as Colombia, Venezuela, even the Dominican Republic.

So, we cannot continue to have Haiti descending into chaos for whatever reason. We, who are part of the larger community of member states who respect law and order, the rule of law, [cannot] allow Haiti to continue to descend into chaos. Certainly not after a major tragedy with the assassination of the President. The people are terrorized by the assassination of the President, and they’re now being further terrorized, if you would, by these gangs who are actually killing individuals every day; kidnapping individuals, and overwhelming the small police force of Haiti.

So, Haiti needs your help. I hope that the individuals around the world will hear this message.