Infrastructure and Education: Key for the Development of Haiti and the Dominican Republic

This is the edited transcription of the presentation by Domingo Reyes delivered in Spanish with English interpretation to Panel 2, “The Science of Physical Economy,” of the Schiller Institute’s Nov. 13-14 Conference, “All Moral Resources of Humanity Have To Be Called Up: Mankind Must Be the Immortal Species!” Mr. Reyes is a former professor of Economics in the Dominican Republic. 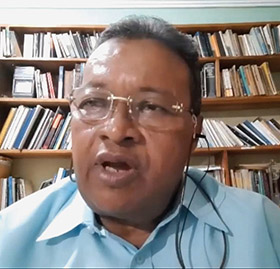 Greetings to all the brothers of the LaRouche movement who are present at this conference, and greetings to everyone who will be watching the archived version.

The problem of the Dominican Republic and Haiti calls for the solution of a series of problems that are inherent to all the economies of the Third World.

Discredited neoliberal paradigms, which destroy a nation’s physical infrastructure and make it dependent on the financial markets that run Wall Street and the City of London, must be abandoned.

But what happens? National production, both in the Dominican Republic and in Haiti, has been destroyed by the intervention of these models of privatizations, and these financial models, which have only increased our foreign dependence, and which have, for example in the case of the Dominican Republic, led to a situation in which the burden of the deficit in the national budget is now around 25%. This makes it impossible to develop national production and development programs. This also makes it impossible for the economy to absorb the workforce that is coming out of the educational centers.

And these people are forced, necessarily, to emigrate abroad, as our Haitian brothers do, who do not have a sufficiently developed educational system, who do not have a well-developed health system, nor do they have physical infrastructure that would allow them to meet their vital needs. And so, they emigrate, at first to the Dominican Republic, but they are also going to the entire Caribbean area and to the continental mainland. That is why we recently saw how, on the Texas border, our Haitian brothers were lassoed by American cowboys, American policemen, just like the days of slavery.

All this can be solved—in one way, and one way only. And that is by implementing the LaRouche movement’s philosophy of the development of the physical economy, and of the implementation of those ideas on a national level.

As long as we persist in the application of models based purely on the financialization of foreign stock markets, which have placed us in a situation of dependency, where everything that is produced, where everything that is made, we either import, or the money that we use is borrowed from the international financial system, which increases the burden of the debt more and more, and national production is increasingly insufficient to cover that debt.

There will come a time when a situation will arise, like at the beginning of the last century, when, in 1916, the customs house and everything that produced money here in the Dominican Republic, as in Haiti, were occupied by foreign controllers, who controlled the national income. And they gave back to the State only what was essential for the payment of a few public services.

Therefore, until we break with that situation, and establish a model based on the development of the physical economy that enhances the national capacities that we have, as well as the production of goods based on our own resources, the economy will be unsustainable.