This is the edited transcript of the video presentation of Billy Anders Estimé to Panel 2, “The Science of Physical Economy,” of the Schiller Institute’s November 13-14 conference, “All Moral Resources of Humanity Have To Be Called Up: Mankind Must Be the Immortal Species!” Subheads have been added. 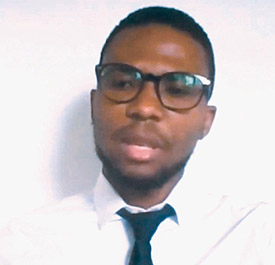 I’m Billy Anders Estimé, and I’m cofounder of Café Diplo Haiti. I would like to thank first the Schiller Institute for this opportunity to speak to the whole world through this short video during this international conference.

The world is changing, and no one should remain indifferent to this change. Faced with this change, we cannot, and above all we must not, remain indifferent. The most sacred values in all the history of humanity are for the most part threatened by this change today. Human Rights, which constitute the basis of all modern societies, are today in danger, because today human well-being is no longer a duty in certain states. I will take Haiti as an example at this time.

I wonder what we are really talking about when we refer to the concept of globalization. There are even states most concerned, which refuse to be aware of their common destiny. I feel morose, seeing at such a crucial moment, when we must come closer, that the Dominican Republic and Haiti are venturing into a diplomatic struggle that can turn sour at any time, given the fragility of the existing relationship between the two countries. I will not ask the political leaders of the two countries to forget history, but the time of historical hatred is over. We must avoid going into the past to arouse hatred, because we have a bigger problem today. The future must be the priority.

The development plan proposed by the Schiller Institute, apart from the fact that it takes into account the inability of Haiti to lead to its own development, also touches on a particular point that makes it even better: This is the relations between Haiti and the Dominican Republic:

China’s involvement is essential to the launch of a reconstruction and development program for Haiti and the surrounding region, which must necessarily include the Dominican Republic, which shares the island of Hispaniola with Haiti, and other nations of the Caribbean and Central American Basin; this set of nations will function as part of the Global Land-Bridge.

The plan has eight main axes that come together in a central point: “a universal health system.” It is a formidable plan, but it is at the same time very complex; and at the same time requires a great fight in order to see the day, because I sincerely do not yet see the will of the different actors involved in this plan.

We have a struggle to fight, and we must set aside our differences to fight it together, because no one can do it alone. States today cannot go it alone or regroup in small clans, because the problems facing humanity concern every human being. It is time for great cooperation: Cooperation to eradicate hunger, poverty, injustice, the vulnerability of nations to climate change. We must prioritize the principle of cohabitation more than ever, because whether we like it or not, we have the planet in common and to protect it, we must act together.

I urge everyone, and especially young people, not only from Haiti or the Dominican Republic, but from all over the world, to fight for a better future with the foundation of a state mutual aid that prioritizes human well-being. Let us act together to allow the plan of the Schiller Institute for Haiti to be known by as many people as possible in order to boost the key players to engage in the resolution of this plan. We are all neighbors, making the planet our center of unity, because it is a gift we have in common, and we must preserve and protect everything. We also have a duty to keep it in good shape for future generations, because we are only temporary occupants.

To you, my dear Dominican and Haitian brothers:

It is time to become aware of our common destiny, and to ring the bell of unity and solidarity, in order to be able to think about the progress of the island of Hispaniola.