The Strategy for Destroying Dope, Inc. in the 21st Century

Dennis Small is the Ibero-America editor for EIR, and an original co-author of the world-renowned study of the international drug trade first published in 1976, Dope, Inc. His presentation led off the second part of Panel 2, “The Science of Physical Economy,” of the Schiller Institute’s Nov. 13-14 conference, “All Moral Resources of Humanity Have To Be Called Up: Mankind Must Be the Immortal Species!” 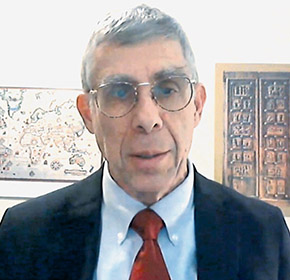 Back in the mid-1970s, almost 50 years ago, Lyndon LaRouche declared war on Dope, Inc.—the international drug cartel responsible for waging a new Opium War on the world’s population. He did it in the only way you can win such a war—by identifying and destroying the British banks and financial interests that are the driving force, and the main beneficiaries of that drug trade—as we at EIR did in the international best-seller commissioned by Mr. LaRouche, Dope, Inc., Britain’s Opium War Against the World. 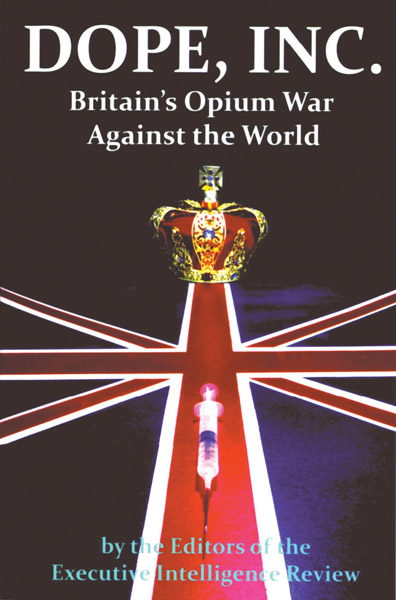 Oh sure: you have to use law enforcement and even military measures in some circumstances. You have to eradicate the crops, destroy the labs, seize the narcotics, help treat and release addicts from their enslavement to drugs, and free equally enslaved peasants and others in the supply chain from their bondage, by providing productive alternative crops and agricultural projects.

But above all, you have to track down the multi-trillion-dollar banking and financial apparatus that runs Dope, Inc., and then try and jail those responsible—three-piece bankers’ suits and all.

This has never happened to date. So let’s not hear any more nonsense about how you can’t wage a war on drugs, that it’s been tried, and it has failed. There has never been an actual War on Drugs—not the kind that Lyndon LaRouche called for, that would start with Glass-Steagall banking separation, which has already been discussed by my colleagues on this panel, and would proceed to replace the drug economy with global infrastructure projects such as LaRouche’s World Land-Bridge. The only so-called “strategy” that has been tried and has failed, is that of drug legalization.

I’ll show you what I mean.

Drugs are a pandemic, which has swept the planet over the last half-century. Our quantitative analysis of the drug trade has always focused on the actual physical quantities of drugs produced, and the dollar value of their potential sale.

Here’s the big picture: Over the last 40 years, the drug trade has grown from a $250 billion per year business, to one that now rakes in over $1.5 trillion per year. In the 21st Century, it [has] tripled in value. Please note that over half of that potential revenue comes from marijuana. Please note as well that about one quarter of the world’s 200 million cannabis users are Americans.

Not to minimize the important, deadly role played by opiates (opium and heroin), cocaine, and amphetamine-type stimulants (or ATS), including most significantly, methamphetamines. 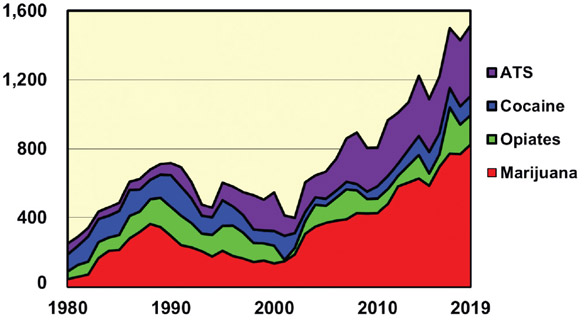 I want to point out that Figure 1, “Value of Potential World Drug Sales,” is a conservative estimate of the entire drug trade. It does not include New Psychoactive Substances (or NPSes), which are being cranked out by Dope, Inc. chemists more rapidly than the new designer drugs can be scheduled or made illegal. It’s estimated that there are over 1,000 such drugs, and new ones are being created at the rate of about 80 per year. Nor does it include CPDs, or controlled prescription drugs, including opioids such as oxycontin and fentanyl and their synthetic variants, which are the leading cause of skyrocketing overdose deaths in the United States today.

I want to emphasize that, ever since the U.S. and China reached an agreement, and China’s class scheduling of fentanyl in May 2019, trafficking of fentanyl from China into the United States has plummeted: in 2017, 128 kilos of China-originated fentanyl were seized; in 2020, that had dropped to a half kilo.

So, when NPSes and CPDs are taken into account, it is quite possible that the total blood-money take of Dope, Inc., is actually in the range of $2 trillion per year.

The total value has risen despite the fact that average prices have dropped significantly across all categories of drugs. This is a result of Dope, Inc.’s intentional marketing strategy of price reduction in order to expand the number of consumers, and therefore total sales.

Drug by Drug, What’s Produced Where 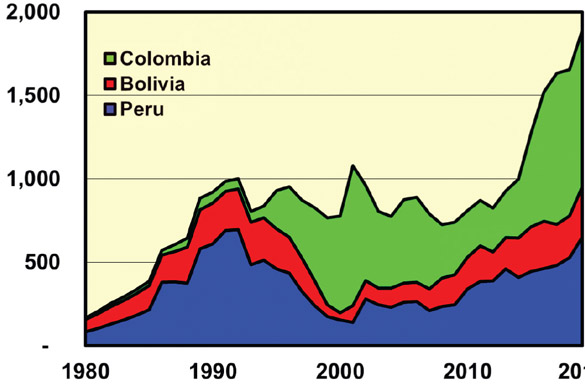 The coca leaf is grown and processed into cocaine in just three countries in the Andes region of the Americas: Peru, Bolivia, and Colombia. It is then shipped to the U.S.—through Central America, Mexico, and the Caribbean islands (including Haiti and the Dominican Republic)—and to Europe. Again, note the dramatic rise in the quantity of cocaine produced, going from 777 tons of pure cocaine equivalent in 2000 to 1,886 tons in 2019. (See Figure 2.) Colombia has played the dominant role in this increase, ever since it stopped aerial eradication of coca plants under international pressure from environmentalist NGOs and the State Department, and is now limited to using—machetes.

Now let’s look at opium production, much of which is trafficked as simple opium, and part is converted into heroin (see Figure 3). In 2019 Afghanistan produced 6,700 tons of the 8,500 tons produced worldwide, or about 80% of the total. Up until the mid-1990s, Afghanistan grew very little poppy and produced very little opium. The sharp drop you see in 2001 is an important anomaly, and occurred during the period that the UNODC, then headed by Pino Arlacchi, worked with interested international parties and with the Taliban, to try to stop the Dope, Inc. takeover of that country. Then came the U.S. and NATO occupation, and you can see the results.

We turn next to marijuana. 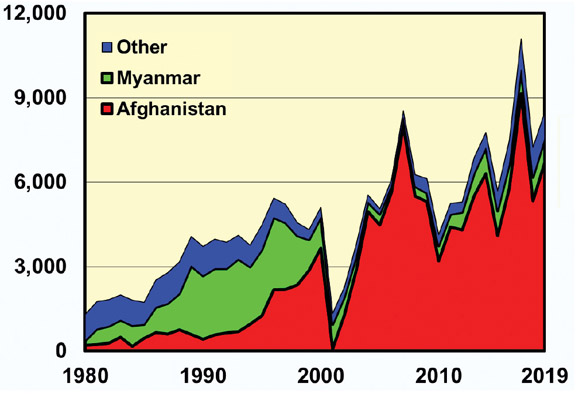 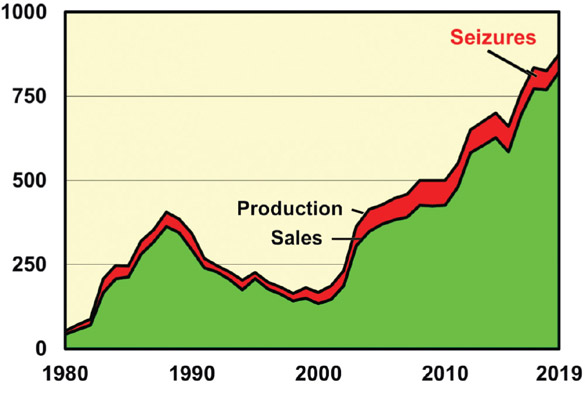 Figure 4 shows the street sale value of global marijuana production, as well as the miniscule amount that has been seized: scarcely 6% of the total produced. Total potential sales skyrocketed in the 21st Century, from a mere $134 billion in 2000, to $823 billion in 2019—a stunning six-fold increase.

But it gets worse. During the same period, the THC content per gram of marijuana—that’s the psychoactive compound in cannabis—rose from about 5% in 2000, to 15% in 2019. In other words, six times more marijuana is being consumed, and it is on average three times more potent, than what was happening in 2000. And it gets worse still. 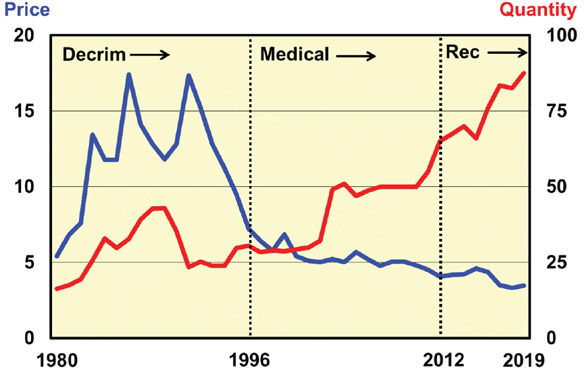 Figure 5 is a little more complicated, and I’m going to ask you to study it closely.

The rising red line indicates the rapid growth of the physical quantity of marijuana produced worldwide over the last 40 years. Now add in the blue line, which is the average price on American streets of a gram of marijuana, corrected for an average THC content of 5%. You can see here, Dope, Inc.’s marketing strategy in action: The price of pot was drastically lowered beginning in the 1990s, with a four-fold drop as of today. During that same time period, the quantity produced and sold skyrocketed, also by about four-fold.

Finally, map all of this against the timeline of the drive for the legalization of drugs in the United States. First came decriminalization, a campaign led and financed by the likes of mega-speculator George Soros. It is the bankers and financiers who have promoted the legalization drive all along. In 1973, Oregon became the first state to decriminalize marijuana, followed by another dozen states over the next five years.

That set the stage for the sharp drop in price, and for widening the net, with the introduction of so-called medical marijuana. California was the first state to do that in 1996, and within two decades the majority of U.S. states had adopted the same policy. That’s when consumption really took off. Then full legalization of the “recreational” use of marijuana was unleashed in 2012, by Colorado and Washington State. Today, eighteen states have done the same. And fully 40 of the 50 states now have either recreational, medical, or decriminalization laws on the books. 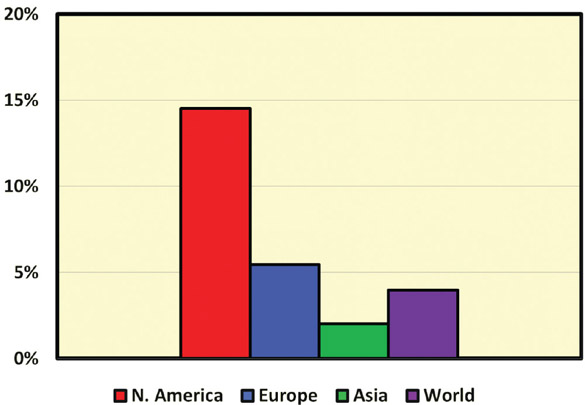 In 1995, 80% of American adolescents understood that there is risk involved in using marijuana. By 2019, under heavy propaganda bombardment by the drug lobby, their purchased Congressmen, and the media, that had dropped down to 50%. Today, marijuana consumption—Dope, Inc.’s most successful gateway drug—is ubiquitous in the United States of America.

It should come as no surprise that the prevalence of use in the U.S. population is about 15% and rising, three times that of Europe and four times the world average.

To call the overall impact of the drug pandemic deadly, is an understatement. A half-million people died of drug-related deaths in 2019. Over the course of the 21st Century to date, close to 10 million human beings have been lost to drugs. Based on that, the UN further calculates something they call “healthy life-years lost due to drugs.” In 2019 alone, that translated into 18 million life-years lost. Over the course of the 21st Century, we have lost about 600 million potentially productive life-years. About 25 of those 600 million, belonged to my older brother—and I’m sure that each of you watching this report have similar losses you could recount.

Now let’s turn to some answers. 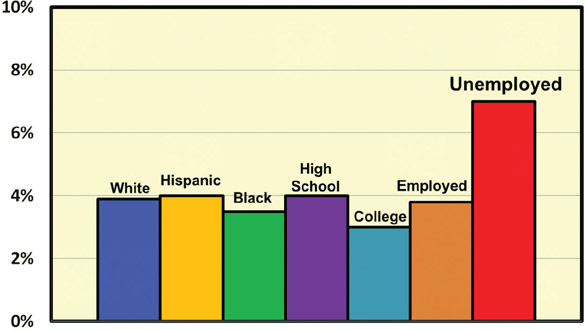 As I said at the outset, if you want to take down Dope, Inc., it is critical to replace the world narco-economy with a global, high-tech infrastructure development plan, of the sort Lyndon LaRouche defined.

Work with other nations, and China’s Belt and Road Initiative in particular, to build the World Land-Bridge network. That will upgrade global productivity and create 1.5 billion new productive jobs across the planet. This will replace what today could be called the World Dope-Bridge. (“Main cocaine trafficking flows, as described by reported seizures, 2005-2019,” a schematic map of the cocaine trade, shown on the video presentation.)

The Case of Haiti’s Future 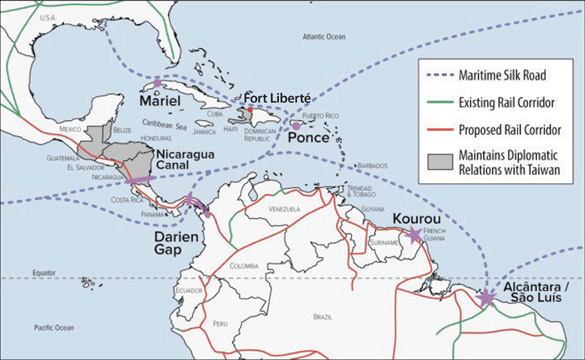 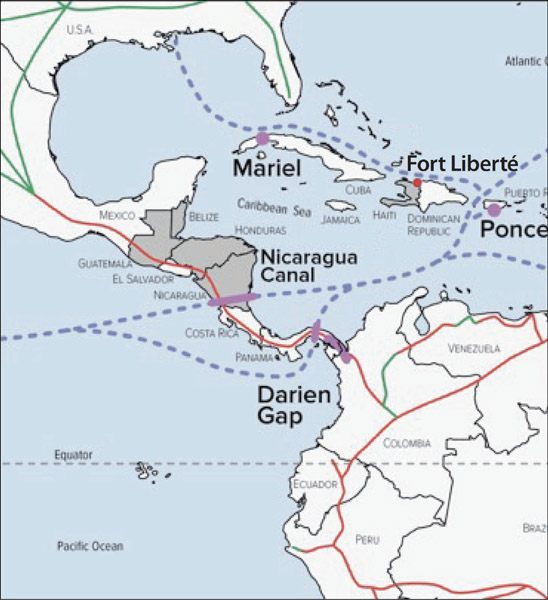 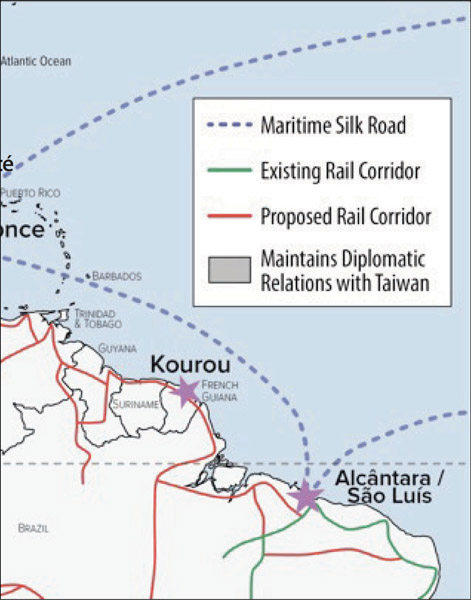 Today, the economy in the region is dominated by cocaine and other drug trafficking.

Which brings me to my final point: Haiti.

The policy approach taken so far by the Biden administration will never establish security in Haiti, because the gangs now controlling daily life there, thrive on the poverty that is ravaging the entire population, especially the youth. Furthermore, those gangs have been provided heavy weaponry and other backing by Dope, Inc. Haiti, like the Dominican Republic, is a major Caribbean transshipment site for cocaine and other drugs heading north to the U.S. from the Andean countries.

Nor would an outright U.S. invasion work, as some hot-heads in Washington and elsewhere have proposed. The only “security policy” that can function is one based on the immediate economic development of Haiti—and the whole region, as the Schiller Institute has laid out in its Plan to Develop Haiti.

A workable approach would be to deploy a multinational Army Corps of Engineers of friendly nations, under United Nations authority, which would respect Haiti’s sovereignty and would work with its authorities to address both the economic and security problems simultaneously. They would have to immediately guarantee deliveries of oil, food, and other necessities, now held hostage by the gangs, through armed convoys authorized to deploy whatever force is required. This Corps of Engineers would at the same time immediately move for CCC-type projects for youth to start national reconstruction, and it should involve American, Chinese, Brazilian, and other military engineers. Such an approach would quickly win over the population and isolate the gangs (and their controllers) once they see that it’s serious, that it will work, and that it respects Haitian sovereignty.

At the same time, similar international cooperation would be deployed to interdict any and all shipments of drugs in and out of Haiti and the Dominican Republic. That will quickly dry up the source of funding and arming of the gangs. There will then be only one game left in town: development.

And such an emergency action program would then serve as a model of the kind of approach needed globally to destroy Dope, Inc. in the 21st Century.