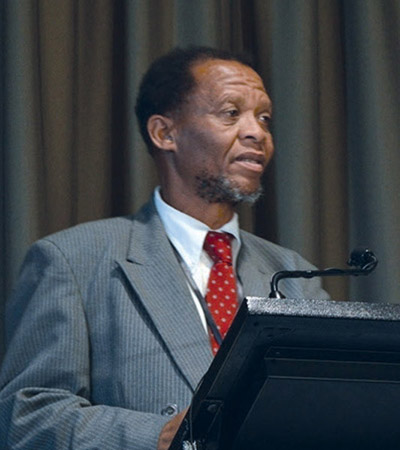 Ramasimong Tsokolibane, a collaborator of the late Lyndon LaRouche and leader of LaRouche South Africa, died on Wednesday, March 2 at his home in Evaton, Gauteng, South Africa.

More than a political activist, he was truly a thinker. As Ramasimong grew in his understanding of LaRouche’s mission, it expanded his comprehension of his own purpose and mission. Thus, while speaking as a proud citizen of South Africa, he also spoke for the people of all of Africa. He saw himself as absorbing their hopes and needs, their longing to live as fully productive human beings. And in his many statements, including greetings to conferences sponsored by the Schiller Institute, he summoned his righteous anger in words for the enemies of that vision for Africa and the world.

Phillip was a great admirer and collaborator of “that great lady,” as he called her, Helga Zepp-LaRouche, and was proud to represent Africa on her Committee for the Coincidence of Opposites. One of his greatest desires was to bring Mrs. Zepp-LaRouche to Africa and to South Africa to meet the people she was fighting so hard to defend, for a chance for a better life.

Ramasimong wrote—often jointly with David Cherry, his colleague from The LaRouche Organization—for his own website, LaRouche South Africa, and for Executive Intelligence Review, the world’s leading journal on the advance of human civilization.

His perception of events in South Africa broadened and elevated the thinking of those wanting to understand the nature and actions of the Malthusian forces that have kept the Republic of South Africa a captured vassal state of Wall Street and the City of London oligarchs.

Ramasimong thus sought to guide South African political thought toward a higher level and explained that what happens throughout the continent will be controlled by the Malthusian operations of the oligarchy until national sovereignty is achieved politically and financially.

It was through his work and that of David Cherry that the color revolution against former president Jacob Zuma was first exposed.

His analysis has proved to be perfectly correct.

Ramasimong was a lifelong member of Mangaliso Robert Sobukwe’s Pan Africanist Congress (PAC). Sobukwe’s PAC, contrary to Anglo-American propaganda, was founded on the principle that, beyond all else, it is agapē, love of mankind, that matters. It was that principle that drew him to the ideas of Lyndon LaRouche. He also collaborated with President Jacob Zuma and defended the African National Congress from 2014.

He joined LaRouche South Africa in 1991—long before it had that name—a short time after it was founded by Philemon Sekoatle, a Christian pastor. Sekoatle had learned of LaRouche through contact with an American member of the LaRouche movement, Allen Douglas, who visited South Africa at that time. Ten years later, when Sekoatle passed away, Ramasimong succeeded him as the leader.

In 2013, former U.S. President Barack Obama made a state visit to South Africa. While many South Africans fawned over the color of his skin, Ramasimong and LaRouche South Africa protested his speech to African youth from several African countries—gathered at the University of Johannesburg in Soweto—with very large, full-color placards depicting Obama with the Hitler moustache. In his speech, Obama declared his Malthusian intent, lecturing the young Africans that they must not aspire to Western living standards because—according to the prevailing genocidal pseudo-science—that would cause “the planet to boil over.”

At that demonstration, Ramasimong was interviewed by Reuters, AP, at least one major U.S. television network, Australian Broadcasting Corporation TV, one of the London tabloids, Iran’s Press TV, and others. One of the interviews was given by a member of LaRouche South Africa, Frank Sukwana. They called Obama “a killer.” The LaRouche South Africa demonstrators said that American foreign policy under Obama had killed more people in Iraq and Libya, and by drone warfare in Somalia, than Hitler had done.

A young man, standing on the sidelines of one of these interviews, afterwards said to Ramasimong, “Where are you from?” Ramasimong: “I am from here, from Evaton township,” just 50 kilometers away. The young man said, “No you’re not. Nobody around here talks like that!” It was emblematic of one of the problems of presenting LaRouche’s ideas to the broad public in South Africa.

Unlike President Obama, LaRouche South Africa consistently pushed for more nuclear energy as a way to provide inexpensive, reliable baseload energy to enable the industrialization of African economies. In one of the articles co-written with David Cherry, they outlined the dire consequences should South Africa neglect nuclear technology.

Ramasimong distributed a great deal of literature, both via email and by hand. One recipient was a man who lived near him, but who could not recognize the leadership of Lyndon LaRouche after several conversations. Eventually, Ramasimong circulated DVD copies of a LaRouche Town Hall event in New York City, at which Lyndon LaRouche’s friend, former Senator and Presidential candidate Mike Gravel was present in person, and spoke and answered questions. Ramasimong’s neighbor was deeply touched by Sen. Gravel’s humanity and humility. It turned him around so powerfully, that when his wife bore him a son, he named him Lyndon.

In 2015, Ramasimong delivered a lecture at the Citizens Electoral Council conference in Melbourne, Australia, celebrating publication of the book-length proposal for a new economic paradigm, The New Silk Road Becomes the World Land-Bridge (Vol. I), jointly developed by the Executive Intelligence Review and the Schiller Institute, which promotes international co-operation and peace through the science of physical economy, starting with infrastructure for development corridors worldwide.

In his speech, Ramasimong referred to his own eventual passing and asked that he be remembered not for material possessions, but for the vision he will leave for others to take up, as they continue the universal fight for a better world. This speech is a powerful reminder of who Ramasimong Phillip Tsokolibane was. It is posted here by the Australian Citizens Party:
https://www.youtube.com/watch?v=7IomFjirvwc

Ramasimong will long be remembered. He leaves behind his wife, Mmateboho; a son, Leburu; a daughter, Thando; a granddaughter, Selina; a brother, Pusho; and many, many other family members, associates, friends, and admirers.

In the last statement he worked on—a greeting to the February 10 conference on the Afghan crisis co-sponsored by the Schiller Institute and the Russian International Affairs Council—he condemned the efforts of the international financial elite to impose a regime of death as “the new normal.” We publish it here.