This is an edited transcript of the remarks of Michael Callicrate to the Third Panel of the Schiller Institute’s April 9, 2022 conference, “Establish a New Security and Development Architecture for All Nations.” Mr. Callicrate is a Kansas cattleman, policy advocate, and founder and owner of Ranch Foods Direct. 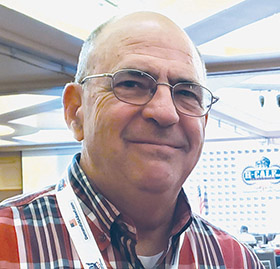 Hello, this is Mike Callicrate from Colorado Springs, Colorado. I want to thank the Schiller Institute and Helga for this opportunity today to present on this panel.

I think we need to look at possibilities that are available to us in addressing this highly concentrated globalized food system that is leaving a whole lot of people hungry in the world, and farmers, ranchers, and food producers included.

At Ranch Foods Direct where I spend my time every day—along with Callicrate Cattle Company in St. Francis, Kansas—we have been working on building a more resilient and sustainable food system for about 22 years. 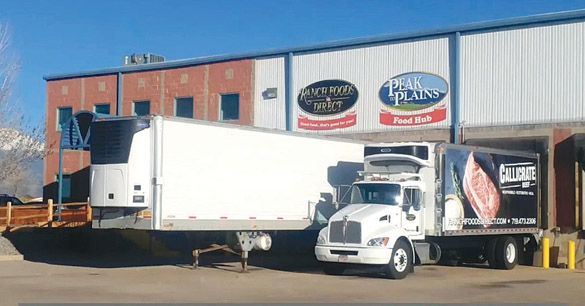 Courtesy of Mike Callicrate
Delivering meat, eggs, and other produce to the Colorado Springs Food Hub, which is also the home of Ranch Foods Direct.

But I think it’s important to talk about why we have looked at this building of an alternative food system. We’ve always believed that concentration of power and wealth is one of the greatest threats to human civilization throughout history. And President James Madison said,

Concentrated wealth will destroy our nation unless the laws change. The day will come when our republic will be an impossibility because wealth will be concentrated in the hands of a few. When that day comes, we must rely upon the wisdom of the best elements in the country to readjust the laws of the nation.

I think that is where we are today.

The United States Department of Agriculture has inscribed in stone above the main portico of the building—the USDA was formed in the 1860s under President Lincoln—but inscribed in stone is the quote, “The husbandman that laboreth must be the first to partake of the fruits. —St. Paul.”

Well, just the opposite today is occurring. The husbandman, the farmer, the steward of the land, is the last to receive any kind of return from the fruits of his labor. In fact, he’s being put out of business by this cartel-controlled food system. 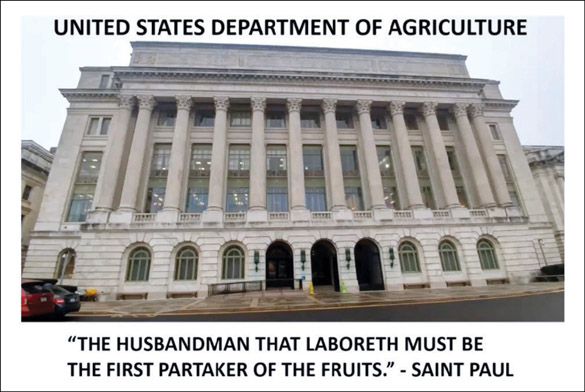 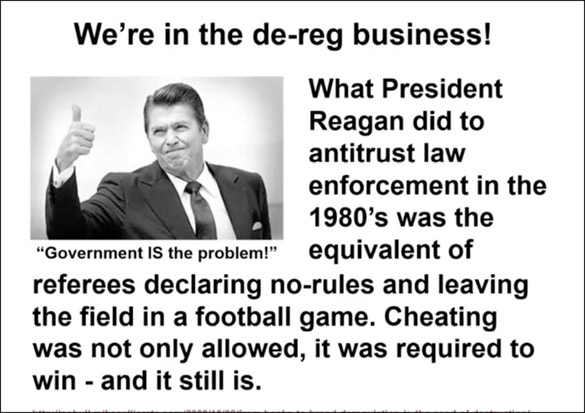 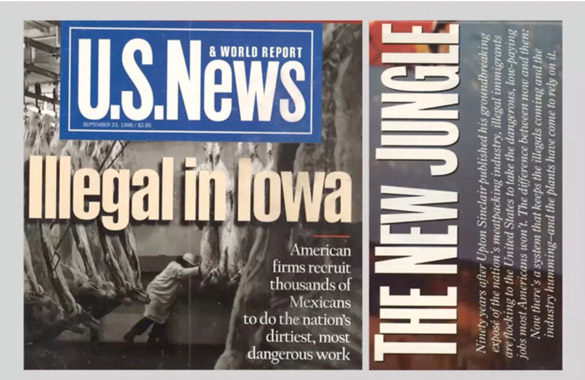 “We’re in the dereg business,” said President Reagan. “Government is the problem.” What President Reagan did to anti-trust law enforcement in the 1980s was the equivalent of referees declaring no rules in leaving the field in a football game. Cheating was not only allowed; it was required and still is.

In 1996, U.S. News and World Report did an article called, “Illegal in Iowa.” Ninety years after The Jungle, the 1906 book by Upton Sinclair, here we are again, addressing the same problems. Even though laws were passed to prevent this sort of thing from happening again, they haven’t been enforced. Ninety years after Upton Sinclair published this groundbreaking exposé of the nation’s meatpacking industry, illegal immigrants are flocking to the United States to take the dangerous, low-paying jobs most Americans won’t. The difference between now and then? Now, there’s a system that keeps the illegals coming and the industry humming, and the plants have come to rely on it.

[T]here is no stopping it [concentration]. This is an evolution that’s going to take place in spite of whoever is in the way.

This, coming from the largest meatpacker in the world, Iowa Beef Processors, soon to be owned by Tyson Foods.

In December 1998, I was told by my only buyer, National Beef in St. Francis, Kansas, that they would no longer be buying my cattle. I had 14,000 cattle, and 12,000 in a feedlot because I couldn’t sell them. So, I called [Agriculture] Secretary Dan Glickman whose responsibility it was to enforce the Packers and Stockyards Act, which would have prevented me from being blackballed by the packers. I asked him why he didn’t enforce the law, and he said, “Well, you know Mike, in this modern day of globalization, we need big companies that can do business globally.”

A judge in the court case that I was a plaintiff in, that was filed in 1996—which led to my being blackballed by the big packers—showed how a captured judiciary reverses the intent of the 1921 Packers and Stockyard Act: To protect producers from abusive meatpacking power. Judge Strom set a very bad precedent when he reversed that 2004 jury decision and award [which found] Tyson-IBP in violation of the Packers and Stockyards Act. The Supreme Court later refused to hear the case. So Judge Strom took away from the cattleman plaintiffs in the case, a $1.28 billion jury award, and any hope of injunctive relief stopping the meatpackers from acting anti-competitively. 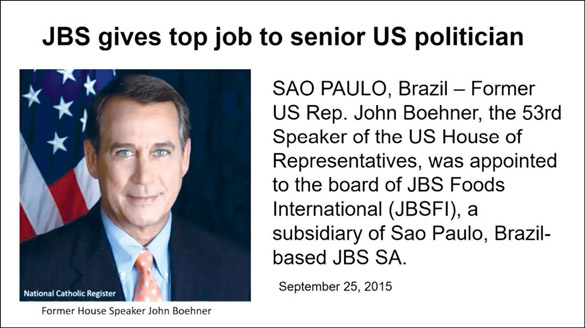 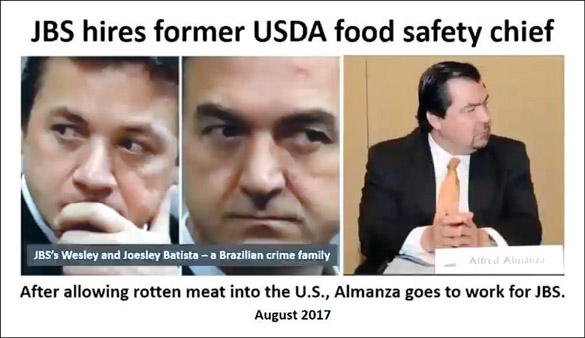 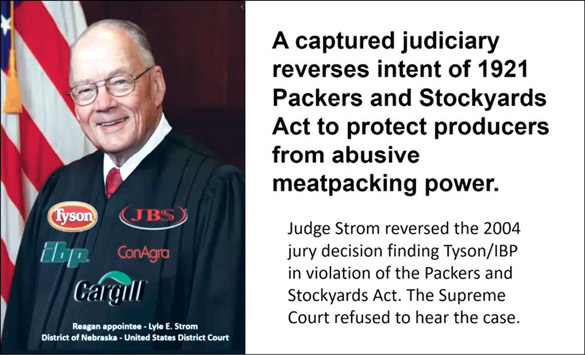 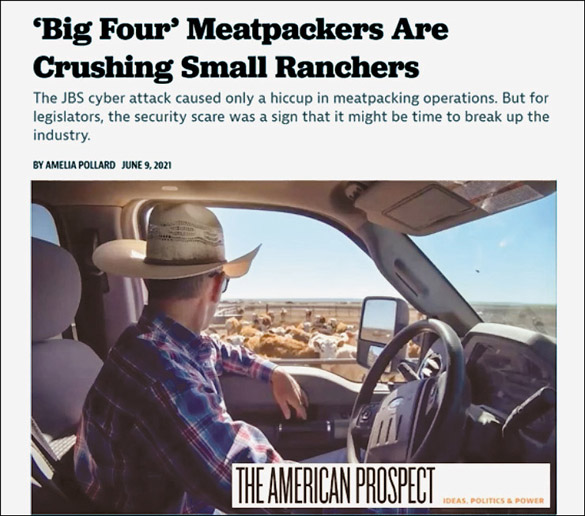 So, here we have more of the revolving door from government to corporation and back again. John Boehner was important in repealing the Country of Origin Labelling [COOL] law, as well as reversing much of the intent of the price reporting law that was supposed to protect producers and make the markets more transparent. So, business as usual at JBS. After paying $3 billion to settle bribery and corruption charges, the Batistas are still in the driver’s seat at JBS—August 2017.

Also in 2017, JBS hired the former USDA food safety chief, Al Almanza. Al Almanza had been working at the USDA for nearly 40 years, and had been instrumental in putting small plants out of business with onerous regulations and rules like HACCP [Hazard Analysis and Critical Control Point]. Then, as administrator of USDA, he allowed the rotten meat in from Brazil during an 80-day period, in which every other country had blocked that meat from crossing their borders. Al Almanza then goes to work for JBS.

The monopoly that’s standing between farmers and ranchers and consumers, and controlling the costs of inputs and the prices of outputs, is the major threat to farmers and ranchers, and consumers as well in having access to good food. The monopoly is extracting the wealth from this enterprise called agriculture, leaving behind poverty, hungry people, bad food, highly processed foods, and deepening the world’s crisis of hunger and lack of food. Four big meatpackers are crushing small ranchers.

The cyberattack on JBS [May 30, 2021] was only a hiccup in the meatpacking operations, but for legislators, the security scare was a sign that it might be time to break up the industry. Again, much like the COVID problem and the breakdown of the supply chain, we are looking to build better, more resilient, safer food systems that lift people from poverty, not only in agriculture, but people who eat as well. Monopolies are bad. It’s been written about by several authors, and Barry Lynn [Open Markets Institute] says, “Fight what’s bad, while building something better.” 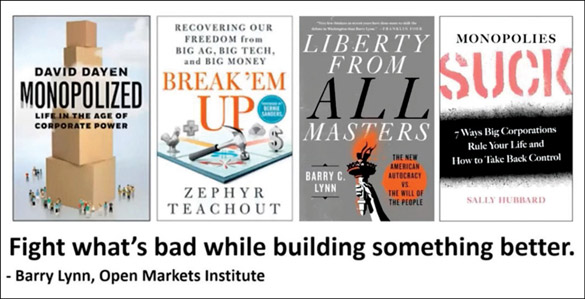 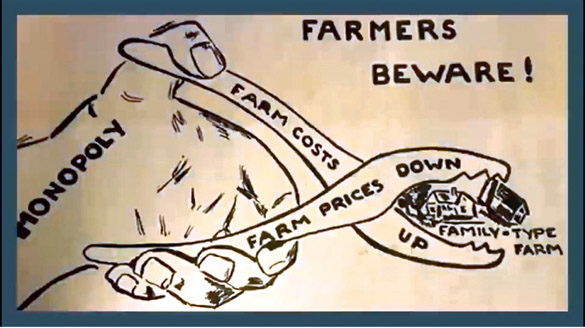 The U.S. Department of Agriculture was formed in the 1860s under President Lincoln, who also established the Land Grant Colleges to develop agriculture and ensure that we can feed ourselves.
View full size 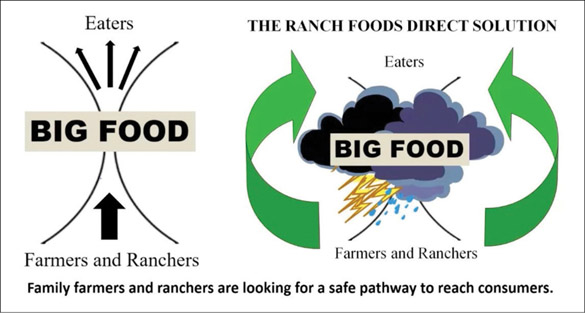 So, let’s build something better. What will that look like? Abraham Lincoln’s advisor Henry Carey said,

We must adopt the measures needed for bringing together the producers and consumers of food and wool, and thus augmenting their power to have commerce among themselves.

Big food is standing between eaters on the one hand and farmers and ranchers on the other. Let’s build a system that goes around the big food monopoly cartels. We’ve done that with Ranch Food Direct. We support the family farm and ranch. We believe the ideal farm is family-owned and operated, diversified, livestock-centered. Responsibly grazing and feeding the farm’s production, with animal manure going back to the land. A more direct route for producers to connect with consumers wanting to know where their food comes from might be a mobile slaughter unit placed in a livestock operation. Animals are processed where they are, eliminating the stress of transport and improving meat quality by also reducing stress and cost.

In 2021, the mobile slaughter unit moved to Montana to be part of a teaching curriculum at Northern Montana College, and is now replaced with a purpose-built slaughter floor in St. Francis, Kansas. Carcasses travel 200 miles to Colorado Springs, along with eggs and other food items from the region, and are delivered to the Colorado Springs Food Hub, which is the home of Ranch Foods Direct.

The final step, in my view, to really restore some well-being back to agriculture, as well as getting consumers better food, keeping money in communities instead of being extracted to global corporations and wealthy elites around the world? I think we build public markets, whether they’re publicly owned, privately owned, or co-owned by the vendors that are in it. My description of the market is that the market feeds the city: Owner-operated businesses process and package foods from the region, from meats to grains to seasonal produce. A brewery using local grains and hops along with many other prepared food makers sell directly to eaters and eateries. Seasonal markets outflow from the main market, welcoming producers and growers from urban to rural. The energy-filled, year-round market is where community happens; a gathering place for residents and visitors.