China’s Belt and Road Initiative:
The Rationale and Likely Impacts 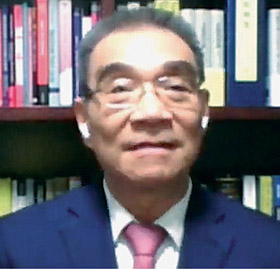 This is a very timely conference, in a very challenging time of the world. I’m honored to be part of the panel and to share with you my own understanding about why China proposed the Belt and Road initiative, and what’s the likely impact this new initiative will bring to the world.

Certainly, one way for China to make a contribution is through the existing global development cooperation architecture, that is, to join the IMF, the World Bank, and to increase China’s contribution. That was initially what China intended to do.

Even if China could increase its contribution through the existing framework, without a vote, it may be questionable, because after the Second World War, the other countries contributed generously—$4.6 trillion U.S. dollars, measured by 2007 U.S. dollar purchasing power—to help the developing countries to achieve their development. But so far, among about 200 developing economies in the world, only two have moved from low income to high income. One was South Korea, the other one was Taiwan China.

And in the 1960s, there were 101 middle-income economies in the world. By the time of 2008, when I became the chief economist and senior vice-president of the World Bank, only 13 of them had moved from middle income to high income, and among those 13, eight were European countries, surrounding Western Europe. There was Portugal, Spain, and the Greeks. Their income gap with the other countries was very small to begin with. Of the producing countries, the other five were Japan, and of course, more East Asian dragons, like Korea, Taiwan, Hong Kong, and Singapore. So from this statistic we can see, even with the generous support from the advanced countries, most developing countries in Latin America, in South Asia, in Africa, were trapped in low-income or middle-income status. They did not improve much.

And so, if China joined the existing architecture, by increasing more money support to it, the result is very likely to be similar. Why the other countries’ generosity provided so much money, but did not get the result of development, of reducing poverty and alleviating hunger, I think was because most of the support from the advanced countries today were used in the humanitarian area, like education and health. Certainly, no one can say those areas were not important. For in a transparent democracy, no one can argue against those as important. However, those kinds of support could not create jobs, could not contribute to the growth, because they were not targetting the bottom line of job creation, the bottom line of growth in the developing countries today.

That was the reason why, in 2013, President Xi Jinping, when he visited Kazakhstan in September he proposed the Silk Road Economic Belt initiative. And in October that same year, he participated in the ASEAN summit in Indonesia, and he proposed the 21st Century Maritime Silk Road, to use infrastructure connectivity as a way for the global development cooperation to improve the infrastructure in the developing countries, as a way to help the development in the developing countries.

And for this purpose, China set up the Asian Infrastructure Investment Bank (AIIB). It had 57 founding member countries, and now it has 104 member countries. In terms of member countries, it is next only to the World Bank, so it is now the second largest multilateral development institution.

So far, also, 147 countries and 32 international organizations have signed cooperation agreements with China, to implement this Belt and Road Initiative. I think it’s well received, because every country sees the needs of relieving the infrastructure bottlenecks for the development in their countries. And if this initiative can be implemented, I argue it is going to be changing the world.

We all know, the 193 member countries of the UN reached an agreement on the 2030 Agenda, that is, the Sustainable Development Goals (SDGs). We all know there are 17 goals, and every goal is very important: Zero poverty, zero hunger, good health, and so on. They are all desirable, but how do you achieve that? Goal number 8, decent jobs, will be essential. If you give decent jobs to the people, they will have income, certainly they will not be poor, they will buy food, they will not be hungry, they will take care of themselves, they will have good health.

So, I think, if we work together to use the Belt and Road Initiative as a new global development cooperation framework, a world free of poverty will be possible. Let me stop here.