This is an edited transcript of the remarks of Saeed Naqvi to the Economy Panel of the Schiller Institute’s April 9, 2022 conference, “For a Conference to Establish a New Security and Development Architecture for all Nations.” Mr. Naqvi is an Indian journalist, TV commentator, and interviewer. 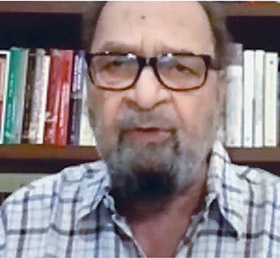 I’m both embarrassed and flattered by being in the company of this august galaxy of professors and scholars, because we journalists are everything by starts, and nothing long. We are, within the course of one revolving Moon, chimers, fiddlers, text men, and buffoons. But, I qualify to intervene and take part in this very, very important conference because while my scholar friends have been working and poring over documents, I have travelled to 110 countries either with my cameraman or with my notepad and my pencil. So, that qualifies me, I think, to some extent, though not entirely.

I’m an Indian journalist. Time was when we thought we had something resembling a liberal press. Let me begin with something slightly different. Aeschylus, the Greek tragedian, the master of Greek tragedy in 400 B.C. or so, was also a warrior; in those days, people had these various definitions. And he said something, he said: “When war breaks out, the first casualty is the truth.” I don’t think this is rocket science that I’m revealing to you. My good friend, the late Phillip Knightley, wrote a book, a masterly catalogue of war correspondence, called The First Casualty—the “first casualty” being the truth.

Let me begin my narrative with the collapse of the Soviet Union, when the first imprimatur of a successful system on a defeated system was the Operation Desert Storm. People don’t realize it. It was a much more important operation, in terms of the information order, than even the occupation of Iraq which took place in 2003. Why? Because, my friend Peter Arnett, from the terrace of the Al-Rashid Hotel in Baghdad, inaugurated something that you and I and generations had never seen. He brought a war live into our drawing rooms via CNN. I remember that Dick Cheney, who was then Defense Secretary—he became Vice President later for the occupation of Iraq—he said, “Oh, I’ve been seeing the war is going very well. I’ve just seen it on CNN.” And then Hosni Mubarak—it became an advertisement for CNN—“Oh, the war is going well. I’ve seen it on CNN.”

Now, that war had the following effect: It pulverized Saddam Hussein. The victorious West had put its imprimatur, not only on the victory over the Soviet Union, but generally: “Now we are here. We are the sole superpower, and this is our imprimatur.” That one telecast of Peter Arnett’s divided the world into two sets of audiences: The victorious West, and the pulverized, defeated, humiliated Muslim world, again—where we stood in India is still a toss-up. And many societies, that is—it’s a little googly I’m tossing at you.

Now, this went on: You had the two Intifadas and then the Bosnian war. In the Bosnian war, Europe said, “No!” Even though everybody saw, daily, the brutalization of the Bosnians, Europe would not intervene, because: “If we intervene on one side, we have come together so that we don’t quarrel. If we come together on the side of, say, the Serbs, the Serbs are with the Allies. If Germany comes on the side of Croatia, Croatia was with the Axis. So, we will not intervene.”

[German Foreign Minister Hans-Dietrich] Genscher did something: He went and recognized Croatia, and that set the cat among the pigeons.

Why am I saying this? It is not recollection of calling on documents. I was there; I was in Zagreb. And Cardinal Kuharić of Zagreb Cathedral, he had been to Rome, and met the Pope. Completely misunderstood. And here you had, “Oh, the Axis is coming, the Axis is coming!” So, one said, this news media that had been created, it had its fallout in the regions. We, in the support of India, we had our own copycat media.

Don’t forget, that when the Soviet Union collapsed, is precisely the moment when Indian economic liberalization began. Before that period, we had one channel, called Doordarshan, which was a little bit like a state-run television. There were no multiple channels in India. Advertising, burgeoning in the economy, demanded advertising space, and a multiple, scores of channels grew up. These channels had come on behalf of industry, the captains of industry, the corporate world. In other words, if they played up the problems of the people, social welfare, poverty, houses, land, drinking water, then people would stand up. We didn’t want to agitate the people. Business must have its advertising; the middle class must be created by the kind of advertising that the middle class likes.

And so you had a society, which has gone not the liberal way—it has not gone the liberal way at all. Anyone who is keeping a steady gaze on India [knows this]. That is what happened here. It was the media.

Now, since the time is limited, let me tell you, when I entered the portals of a paper called The Statesman on my first beginnings as a young journalist in the late 1960s, the line was, enough—the newspaper The Statesman in those days was owned by 12 different British companies. The whole angle from the colonies was still there. The colonial system was retreating, but it had left behind some good institutions, and one of them was The Statesman. It was a great newspaper, and I had the privilege of having been groomed there.

The editorial policy was: “We support the Establishment, a critical support to the Establishment, on an issue-by-issue basis.” In other words, in a democracy, people bring a government into being. Our job was not to follow the people’s verdict, but to see, on behalf of the people, how the government functions. Whether it is the BJP, fascist, communist, ultra-left, ultra-right, was not our business. We were there to support the people’s verdict, on an issue-by-issue basis. That system in India was broken during Mrs. Gandhi’s emergency. Mrs. Gandhi’s emergency disbanded the press. And there grew two bodies: those who hated Mrs. Gandhi, and those who hated those who hated Mrs. Gandhi. That has continued to this day.

In the global arena, the Soviets and the so-called progressives and the capitalists, what should have been celebrated globally as the victory of democracy, of human rights, and of good governance, was celebrated—[but] these words were never mentioned then. It was celebrated as a victory of the market. Rampaging capitalism is what I want. And for that, the price is being paid regionally and everywhere.

Now, at the moment, with the media, what happens? I quoted Aeschylus, “When war breaks out…” So, the Americans—Trump asked Carter, “Sir, the Chinese are going ahead. What should we do?” Carter turned back, and said, “Look, since 1979, the Chinese have not been at war.” They had that war with Vietnam, if you remember—and I covered that war. “Now, after that, we,” said Carter, “have never stopped being at war.” And our media, therefore, has never stopped being a war media.

Therefore, one of the great tragedies of our time is the singular collapse of the credibility of the Western media. Yes, we will watch the tragedy of Bucha with misty eyes. Yes, we watch what is going on in Ukraine. But the question remains at the back of our minds, “Is this the whole truth?” It is unlike My Lai. When Walter Cronkite went and exposed the whole thing, it changed the trend of the Vietnam War. Today, there is doubt on Bucha. There are those, who want to believe it. There are those who want to suspect what has been reported. There is this division. What is in the bargain? The new global order. Where is the media in all of this? We have to think very deeply on that one.