This is an edited transcript of the remarks by Fraydique Alexander Gaitán and Pedro Rubio to the Second Panel of the Schiller Institute’s April 9, 2022 conference, “For a Conference to Establish a New Security and Development Architecture for all Nations.” Mr. Gaitán is President of the CTU USCTRAB Workers Confederation of Colombia; and Mr. Rubio is a CTU USCTRAB leader, and President of the Association of Officials of the General Accounting Office of Colombia. 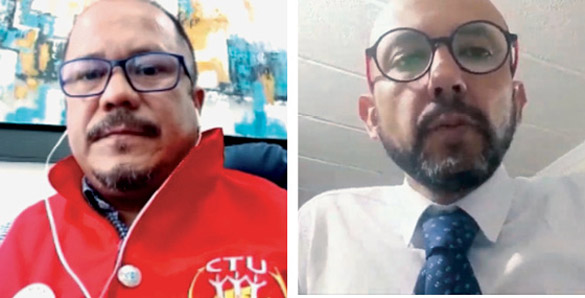 Greetings from the CTU-USCTRAB Workers Confederation of Colombia!

It is very important for Colombia and Latin America to pay attention to everything that is going on at this global juncture. We’ve lived through a global pandemic, and the Ukraine-Russia issue which affects the whole world. This forces us to think about what the policy agenda is going to be, moving forward. We should speak of a New World Order. And we should consider whether or not human beings are going to continue to be at the center of events; and whether or not human beings are the most important thing for those centers of thought such as the centers of power, where we see that the harm done to human dignity and to life itself has reached a serious and enormous crossroads, such that it could easily be replaced by artificial intelligence.

It’s no longer a matter of the thinking of some economic theoreticians, where Man uses Man, where Man is enslaved, and then he is freed, and goes on to the concept of the proletariat, and evolves to the concept of the New World of labor. So, we all have to ask ourselves the question: are human beings really, at this time, at the center of the thinking of those think-tanks and centers of power? We think that they should be.

The other important issue, is to look at the historic evolution of the concept of the world of labor and the global conflicts that have occurred throughout history. The Treaty of Westphalia is one key reference point to take into account, as is the Versailles Treaty, despite the disruptions and some deviations that have been found in them. But we believe that, in the case of the Versailles Treaty, as a labor confederation established on the basis of the thinking of the International Labor Organization (or ILO), which was created as part of Versailles, that tripartism is necessary if we are going to speak of a stable and lasting peace.

The Belt and Road in the Caribbean Basins
View full size 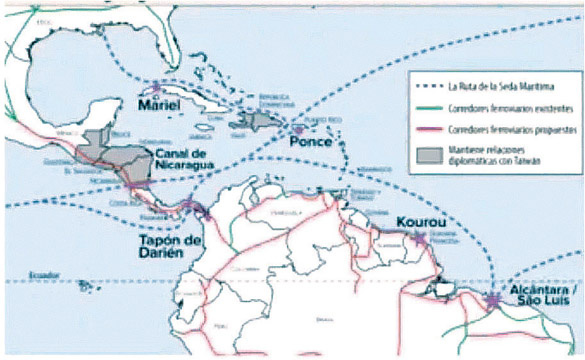 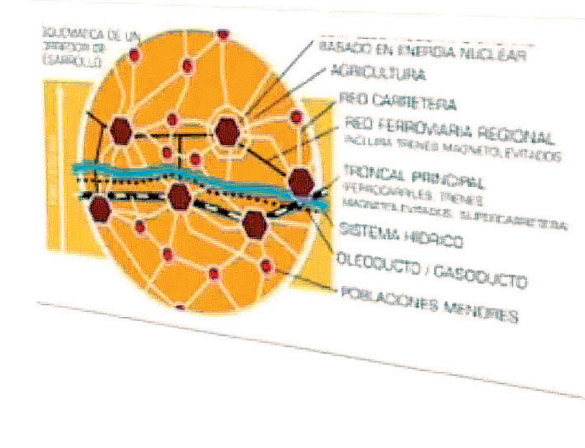 EIRNS
Schematic of a Development Corridor.

Another very important matter we have to keep in mind is the role of the ILO and the UN. If we want the development of nations to be symmetrical, we necessarily have to see if these two organizations are valid or not. For us, the ILO is valid, both because it is and has a democratic sense of participation because of its three electoral colleges: a vote by the state, through the government; a vote by workers; and a vote by employers. The UN has a disruption, which is its Security Council: only some have achieved the armed power of having nuclear bombs and other kinds of weapons of mass destruction, which allow them to be there. But there is no consensus, no democratic decision-making by all nations. That generates the asymmetries that we find today.

It’s important to consider that, in these new architectures, we have to find an equilibrium to furthermore be able to speak of global social justice. That is a policy agenda built by blocs, and that can’t mean going back to unipolarity nor to bi-polarity. We should be talking about a minimum of five blocs, and Latin American should play a strong role among them. We see the example that Africa, which has used the tripartite system, today leads the International Labor Organization.

So, we call for that to be done: to keep strengthening social dialogue among nations. It is not easy to interpret the tensions, because there are tensions between some agendas and others, and that’s what we are seeing in that conflict. Despite the fact that some want to reduce it to the issue of Ukraine and Russia, it is global tension.

So, for the CTU-USCTRAB Confederation, it’s important to return to the tripartite mechanism; to consider the deformation that the UN has in its Security Council and other asymmetrical situations, such as the interventions of Non-Governmental Organizations, or NGOs. In the ILO, their role is clearly defined; but in the UN, the disruptive capital groups, which even control states themselves, torpedo a true agenda of global policies, and obstruct a new architecture which would generate true development for all nations, and which would generate a sense of security for all.

We have been promoting initiatives and proposals for the entry-point into the South American continent through the Darien Gap and Colombia, to become not only a pivotal point for the World Land-Bridge, or the New Silk Road, as it is also known, but also, from the standpoint of a new economic and development architecture for all nations; that it ensure not only the food sustenance of Colombian nationals, but also that it be transformed into a supplier of food for the planet.

Paradoxically, we have very fertile land by world standards, because we are part of the equatorial belt, and we have a diversity of climates which makes it possible for Colombia to produce food 365 days a year. So, we have great potential.

I’d like to mention the calculations made by Vladimir Vernadsky, the father of Russian bio-geochemistry, which we have applied to determining the ability to maintain a given population per square kilometer. It’s quite interesting, for example, that in the case of Colombia, we have 446,656 square kilometers of arable land, and a population of 49.6 million people, whereas we could feed a population of 67 million.

In other words, with the potential that we have today of producing food on Colombian territory, making use of technology—and Vernadsky’s calculations were based on the technology available at the end of the 19th century and beginning of the 20th century—with technological advance, the optimization of our agricultural land in order to feed people, means we could even double that amount.

In other words, I would venture to say that it is possible to feed an average of up to 75-80 million people on the land we have in Colombia.

If we turn to the case of our neighbor, Venezuela, which shares a border with Colombia, Venezuela has 216,000 square kilometers of arable land, with a population today of 28.8 million. By optimizing that territory, based on modern technological advances, they could feed more than 40-45 million people.

And it’s here that we have a sovereign decision that must be made by nations, based on the need to make every square kilometer, or every hectare of land, depending on how you measure it, more productive in order to ensure the food supply. In that way we can face the threat of world famine that the FAO and the UN and many other voices internationally are warning about—that it is not only coming, but it is already underway internationally. And it is necessary to immediately activate an economic recovery plan for nations that have agricultural potential, to intensify the policies to be able to be the food suppliers of the world, and not only of their own populations.

It’s important to implement the approach of “development corridors” in order to ensure the flow of the necessary inputs, so that both the imports as well as the exports of food can be carried out through these development corridors that are proposed as part of the New Silk Road. That, we believe, is what must be done at this moment, at this punctum saliens that we are facing in history.

We have two paths available: one, to advance towards a new era, a renaissance of economic growth and of dialogue of cultures; or, what some theoreticians of the Clash of Civilizations are proposing, a Dark Age of perpetual wars and conflicts among nations.

We, in Colombia, have the hope that the entire planet and these forums of dialogue, deepen the necessary advance of a dialogue of cultures and economic cooperation which the planet so needs.