U.S. Sanctions on Russia and China Are Suicide for the Dollar

This is an edited transcript of the remarks of Dr. George Koo to the Second Panel of the Schiller Institute’s April 9, 2022 conference, “For a Conference to Establish a New Security and Development Architecture for All Nations.” Dr. Koo is a retired business consultant, and Chairman of the Burlingame Foundation. 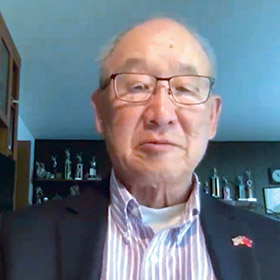 Hello, everybody! My name is George Koo. I’m a retired international business advisor, and I write occasionally for Asia Times. My latest op-ed, posted earlier this week, pointed out that we are facing some consequential blowbacks from the Ukraine war. Those blowbacks could threaten our very existence on Earth.

Now, I was referring to the fact that Washington seems to feel that they can win a nuclear showdown with Russia. The neo-conservatives who are running the Biden administration actually think that is winnable; and that is scary, folks. I’m assuming that there will be other speakers who will address this issue—an important one—in the Q&A.

For the amount of time allotted to me, I want to address why the self-inflicted injury by the Biden administration will spell the demise of the American dollar.

First of all, American policy is based on a very simple playbook: “If you don’t do what we ask you, we will sanction you beyond the level of pain that you can stand.” In the case of Russia, the U.S. started out by freezing Russian reserves to the tune of $300 billion; France froze about €22 billion. The U.S. and U.K. confiscated the gold that’s on deposit in London and New York. Other allies, even Switzerland, have joined in to add to Russia’s pain.

But when Russia didn’t give up and didn’t cry uncle, Biden decided to add more pressure by ordering the seizure of personal property and real estate in the U.S. held by selected oligarchs, including especially those who are known to be close to Putin. At the same time, Biden kicked Russia off SWIFT, the international financial transfer system which stands for Society for Worldwide Inter-bank Financial Telecommunication. In effect, Biden has taken Russia off global commerce.

Many experts have pointed out that what Biden has done is unprecedented in modern history. In one stroke, any country can see that if they incur the displeasure of the U.S., they can be wiped out; their reserve and personal assets taken and confiscated by the U.S. Instead of acting like an honorable fiduciary, the U.S. is acting like gangsters and bullies. Biden has put the full faith and credit of the United States in serious doubt.

In order for Biden to exert maximum impact on Russia, the U.S. needs most if not everybody in the world to join the sanctions and stop doing business with Russia. So far, other than the U.S., Canada, and the EU countries—not even Mexico, by the way—none of 53 African countries have joined the sanctions. None of the 33 Latin American countries have; none of 22 Middle East countries have. Only 3 of the 48 countries in Asia have—namely, Japan, South Korea, and Singapore. Australia and New Zealand are among the island countries that have joined the sanctions. Major countries with large populations and purchasing power such as Brazil, India, China have not stopped doing business with Russia; and thus, keep the Russian economy going.

Apparently, the White House was caught unprepared when Putin announced that Russia will only accept rubles for payment for their natural gas and oil from “unfriendly countries.” Later, he added that Russia would take gold at 500 rubles to a gram. This is especially painful for the EU, because they depend on Russia for 40% of their natural gas supply. The natural gas is not merely to heat homes, which is important until the winter is over, but also it’s a major feedstock for the petrochemical industry in Europe. So, the EU countries can cry foul, protest, and refuse to pay, but Putin said: “That’s fine. No rubles, no gas.”

Russia also has a rupee-to-ruble deal going with India, with a favorable bargain pricing for India. Even before the war in Ukraine, countries have been minimizing or reducing their exposure to the dollar anyway. Russia has a long-term contract with China to be settled in renminbi. Saudi Arabia also has a long-term deal with China for their oil based on the renminbi, or yuan. China has sought agreements with 40-some countries in which both countries agree to settle their deals, their trade, in local currencies, and avoid having to hold on to dollars.

Russia is also a large exporter of grain, agricultural products, and chemical fertilizers. Putin is likely to add those to ruble-only deals. So, it will be a matter of time when EU countries will decide that siding with the U.S. is too expensive, too painful, in exchange for the inflationary shortages that they will experience. Bulgaria, Hungary so far are among the EU countries that have already caved in. Ukraine, by the way, is also a supplier of important food and agricultural products. Their inability to produce will also affect not only the EU, but the worldwide problem in terms of starvation, shortages, and inflation.

The exchange rate of the ruble plummeted when the sanctions were first announced, but Putin’s counter, in pegging the ruble to real assets, has meant that the ruble has bounced back, to the prewar level. So, the rest of the world can see all of this and has to decide whether holding the ruble pegged to real assets is better, or the dollar, backed by the heretofore sacrosanct full faith and credit of Washington. The American public may not fully appreciate that one consequential blowback is the worldwide loss of confidence in the dollar, which is not pegged to any real assets or gold. By acting unilaterally, the American dollar is no longer a safe place for anybody’s foreign reserves, or tycoons’ private wealth.

As a result, increasingly, the dollar is not going to be worth the paper it’s printed on, and history will show, when the U.S. economy collapses, that this is attributable to Biden’s folly. The U.S. knows only one diplomatic approach, which is to threaten sanctions. They may try it on China, because, so far, Blinken’s message to China and that of his colleagues is, “Join our sanctions; stop doing business with Russia, or else.”

How will China react to the threat? China is the leading trading partner for over 120 countries—virtually the entire world. China has become the factory of the world and makes products that everybody needs and wants to buy; and that includes the United States. So, China is not going to be intimidated by the threat of sanctions. If Biden were to insist on economic sanctions on China, the blowback will hurt the American consumer. Made-in-America factories to replace China’s factories will take a very long time. In the meantime, American consumers will face inflation and scarcity.

It’s becoming increasingly apparent that the U.S. speaks loudly, but carries a shrivelled stick. It’s just not scary anymore. In attempting to decouple from China, the U.S. will find itself standing alone and holding a dollar that nobody else wants to hold onto anymore.