This editorial appears in the February 7, 2020 issue of Executive Intelligence Review. 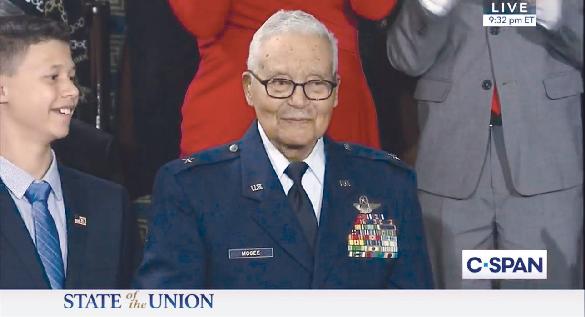 C-SPAN
In his State of the Union Address on February 4, 2020, President Trump introduced 13-year-old Iain Lanphier, an eighth grader from Arizona, who aspires to go to the Air Force Academy. Iain says, “Most people look up at space. I want to look down on the world.” Sitting beside him is Charles McGee, born in Cleveland, Ohio a century ago, who is one of the last surviving Tuskegee Airmen—Iain’s great-grandfather.

Jan. 30—Lyndon LaRouche once said that since 1763—at the end of the French and Indian Wars, when George Washington realized his sole enemy was the British—all of world history has been a battle between the American System of physical political economy and the British system of rentier finance, the oligarchical system now embodied in Wall Street and the City of London.

[As of this writing,] it is highly likely that tomorrow or Saturday the move to convict the President will collapse in the Senate. Just in time for the Iowa caucuses and just ahead of the President’s State of the Union address on February 4.

Nothing in this war—and it is a war for the Constitution and our nation—is certain, as the adversary is wounded but not yet defeated. That is a dangerous circumstance. But, it is very possible that a wave of optimism can now take off, using that powerful, physical force in the universe referred to by President Trump at Davos. In such a mass-strike situation, everything becomes possible, as the President said, provided we give leadership. And we have to do that now. We have to pull rank on behalf of that reservoir of ideas left to us by Lyndon LaRouche, which is the only viable path to rebuild the United States and establish economic justice and prosperous economies throughout the world as a whole.

Internationally, the situation remains very dangerous. A key part of the strategy by the oligarchy is to pull the President into another war in the Middle East. The novel coronavirus has just been declared a world health emergency. Stupid people are using this to attack China, when China is doing huge and incredible things to contain this virus, things which our country probably is not capable of doing in its present, divided state. So, the summit called for by Helga Zepp-LaRouche regarding a meeting of Trump, Putin, and Xi on the issues of war and peace, now will have to include talks, which have probably already started, concerning ending this health threat and taking new scientific initiatives to cure it and similar diseases.

The Forgotten Men and Women Enter the Battle

But we have, now, as the result of this battle so far, ever since this President took the Oval Office, a huge population in the U.S. actually understanding for the first time in my lifetime, that being a citizen and participating in politics is a life-and-death matter. They understand that some awful force is at work to subvert their participation, to steal their vote, and they identify that awful force with the devastation this country suffered through two terms each of George W. Bush and Barack Obama. They call it the Deep State, the military-industrial complex, or other misnomers for the Anglo-Dutch Financial Empire.

It stalks them in the form of an opioid epidemic, a healthcare system which does not work and that they can neither access or afford, the wounded veterans and dead friends which are the result of endless wars, and an economy which does not yet have the ability to support either large or stable families, to allow young people to have children because they see a viable and stable future.

Lyndon LaRouche throughout his lifetime told the world that this force was the British Empire and its policies toward the working and productive classes. That Empire exists as a state of mind and a state of organization of society to which Donald Trump represents an existential threat. He represents that threat because of his attacks on globalization, because of his instinct to reindustrialize the U.S. economy, because of his overt support of space travel and human discovery, because he is a builder who thinks big, and, as fundamentally, because of his love of working people. This is something that Lyndon LaRouche would have found unique in a baby boomer.

Remember that Obama, the Bushes, Clinton, and Carter all proclaimed, in the wake of the destruction of the Bretton Woods system in 1971, that you can’t put the toothpaste back in the tube, that you can’t come back and have an industrial and manufacturing economy, that the gig economy will exist forever, and that the U.S., henceforth, was a service economy governed by global institutions. NAFTA (the North American Free Trade Agreement) and other free trade agreements which Trump just reversed, were a key part of disintegrating the U.S. industrial and agricultural economy.

LaRouche argued constantly and persistently that putting the toothpaste back in the tube was the key to the nation’s survival. Now, Trump is attempting to do exactly what they said could not be done, and is having some success in the process. Much remains to be done, but it can only be quickly done with the weapons provided by LaRouche. The tens and hundreds of thousands who are turning out for Trump’s rallies see that it is possible to be optimistic again. And, we have been steadfast in demonstrating that the coup against Trump is being conducted by the Empire, by the House of Lords, and by their satraps in the intelligence business, the media, and established government entities here.

Putin and Xi represent similar personalities as Trump. The enemy, the British, label all of them “authoritarian personalities” just as they labeled LaRouche and Franklin Roosevelt. Their sin is that they are dedicated to getting things done for the well-being of their nations.

And we have also just experienced, from the President’s lawyers, a master class on the U.S. Constitution that our universities are simply incapable of teaching. LaRouche PAC will be making videos of the highlights of these arguments, particularly Alan Dershowitz’s argument on the differences between the American constitutional system and the British parliamentary system, which our founders absolutely rejected and which the Democrats and their imperial friends are seeking to reimpose here.

So, the groundwork has been laid in the U.S. for a huge breakout come the Senate vote of acquittal. And what the President and his supporters need right now to win, is the ideas of Lyndon LaRouche for rebuilding this country and for developing the entire world, quickly, seizing the high ground now, before the enemy, wounded as it is, gets a chance to regroup.

I want to absolutely contrast LaRouche’s grand vision with something else, a looming threat on the horizon, because it illustrates the nature of the battle. That is Michael Bloomberg. Bloomberg is an emergent threat, and he is, actually, the physical representation of that oligarchy that Lyndon LaRouche fought all his life, and which Donald Trump and his supporters have been fighting, even if they don’t yet know it fully. I wrote an opening salvo on Bloomberg. But that is hardly sufficient.

If it is clear to people who this guy is and what he represents, and why it is different from the American System and LaRouche’s advances on the American System of political economy, then the means for victory are really at hand. Bloomberg, the villain before you, is the bankers’ candidate pure and simple, the British Empire’s candidate, as he has been since he first entertained running for the Presidency in 2008. And, it is clear in the mess which is the Democratic Party, that this guy may actually emerge as the key rival to Trump following the South Carolina primary. And you have a President who, however clumsily, advocates the American System, and has broad support throughout the working class and the producer segment of the American population. I ask you, could you ever describe for me a better environment for LaRouche’s ideas taking hold and coming into reality here?

I want to refer you to two articles which appeared in EIR in 2008, when LaRouche focused on Bloomberg as the next Mussolini, and designed an intelligence project which exposed the British roots of this guy and his plans to reduce most of the population of the world and the world’s social organization to that found in medieval feudalism. One was called “The British Genocidal Roots of Mayor Bloomberg’s Madness” and the other was called “Rohatyn, Bloomberg Peddle Post-Nation-State World.” The first article pins Bloomberg as a British agent, someone who groveled before the Tory Party in 2007 with the proposition, “You forgive us for 1776 and we forgive you for 1812.”

The second article detailed an oligarchical scheme to destroy nation-states, and, in the United States, the power of individual states themselves. Instead, nation-states globally, and the states in the U.S., would be replaced by the cities and their immediate metropolitan areas as the primary unit of government. These modern city-states, in turn, would be ruled by a global financial elite, just as in feudal times.

If green policies are implemented with the resulting necessity of eliminating whole swaths of the population who can no longer be supported, this is what you get. In addition, Bloomberg, and his mentors George Shultz and Felix Rohatyn, have been advocates of both privatized infrastructure and privatized armies—ideas which have resulted in the looting of formerly vital infrastructure here, and projects which, when undertaken, actually loot the public rather than conferring any benefits. The privatization of intelligence and military forces has been underway for some time. As in feudal times, rich people would deploy the private armed forces—the institutions of government itself would no longer be really necessary, as people were reduced to addressing small, very local issues of no real importance.

Now think about that in terms of what is now “Fly-Over Country” in the U.S. and the continuing population deserts which are our rural areas. This policy, has, in fact been underway for a very long time. It is a deliberate starving of formerly vital areas of the economy in order to make way for the bankers’ plan for government, following the inevitable new collapse of their system. Do you think city-states could conquer something like the novel coronavirus? If you think they could, just study the history of the Black Death. This week, Bloomberg has been rolling out the big city mayors whom he and George Soros have bought for their feudal city-states project, and they are endorsing Bloomberg, rounding up votes for him.

All of Bloomberg’s foul ideas, of course, are absolutely the opposite of those of Lyndon LaRouche, who called for wholesale reindustrialization of the United States, the building of vast new manufacturing and physical infrastructure, creating thousands of productive jobs, and fed by a relentless frontier of new discoveries resulting from a crash program for space exploration and development of thermonuclear fusion power. Whole new cities would be built and populated, the beautiful way that the Dome of Florence was built, as President Donald Trump referenced so forcefully in his speech at Davos.

We now have a great opportunity before us. Let’s seize it now, when we absolutely can!