Will China’s Belt and Road Policy Return the American System to the United States?

“Britain seeks friendship only with those which can render her services, and when her friends are too weak to be of any use to her, they must be sacrificed in her interest. Britain’s tender regard for her friends is like the delicate care usually shown by farmers in the rearing of silk worms: after all the silk has been drawn from the cocoons, they are destroyed by fire or used as food for the fish. The present friends of Great Britain I know more than silk worms and they are receiving all the tender care of Britain simply because there is still some silk left in them.” 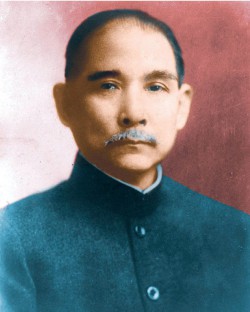 Library of Congress
Sun Yat Sen, leader of China’s Republican Revolution in 1911, proponent of the American System of Alexander Hamilton.

Americans that wish to assist in advancing the U.S. Presidency’s efforts at joint cooperation between China and the United States, in space and on earth, and particularly in the cause of peace through mutually beneficial economic development, have to do only one thing: reopen the legal case of American physical economist Lyndon LaRouche (1922-2019). Why? Because Lyndon LaRouche engaged in a dialogue with China, from prison, represented by Helga Zepp-LaRouche, his wife and founder of the Schiller Institute. That dialogue helped catalyze the most successful growth of any economy since the shutdown of the Bretton Woods System on August 15, 1971. It was a dialogue of civilizations, carried out by the civilized, while the uncivilized knuckle-dragger, George H.W. Bush, created “New World Disorder” in the White House.

Nowhere is the uniqueness of Lyndon LaRouche in advancing, and thus resurrecting, the Hamiltonian anti-colonial economic policy of the United States seen more clearly than in the cultural-diplomatic offensive carried out by him and Helga Zepp-LaRouche starting in 1989-1994. LaRouche was unjustly imprisoned in the United States during this entire time, in large part because he was proudly guilty of reviving the Abraham Lincoln Administration’s approach to Eurasia. That approach involved the idea of defeating the murderous British Empire through establishing “the harmony of interests,” between nations, and internal to nations, through the harmony between capital, agriculture, and labor. This is the happy precedent for the United States to accept the “win-win” outlook expressed by President Xi Jinping today. President Donald Trump’s insistence that relations with Russia and China are “a good thing, not a bad thing,” is not a banality, not a mere “statement of the obvious,” but an implicit declaration of war against the Bank of England’s Governor Mark Carney’s policy of “financial regime change” against the Presidency of the United States, which Carney announced this past August in Jackson Hole, Wyoming. The City of London banking faction that earlier imprisoned LaRouche is that same faction that has committed itself to removing Donald Trump from the United States Presidency before the year 2020, by “any means necessary.”

For patriotic Americans to oppose the ongoing criminal process of policy treason against the United States, it were useful to know the true history of this country’s long-standing relationship with China, as an ally in the final destruction of the power of the British Empire and its commitment to the population reduction of “the world’s inferior peoples.” The Belt and Road Initiative is in fact the modern-day successor to the United States’ Transcontinental Railroad, and the worldwide “railroad diplomacy” conducted by American patriots in China, Russia, Peru, and other countries in the aftermath of that Transcontinental Railroad’s completion in 1869.

Lincoln vs. the British Opium Wars

The British had fought two “opium wars” against China, 1839-42 and 1856-60, forcing addiction upon China’s population. (To this day, this accounts for the deep aversion to the idiotic idea of “recreational drug use” among the vast majority of China’s citizens.) When Lincoln took office in 1861, the Second Opium War had just concluded, with the British having destroyed the bodies and souls of millions of Chinese in pursuit of their imperial interests. When the Lincoln Administration in June 1861 appointed Anson Burlingame as ambassador to China’s Qing Empire, China was still directly under occupation by the British. 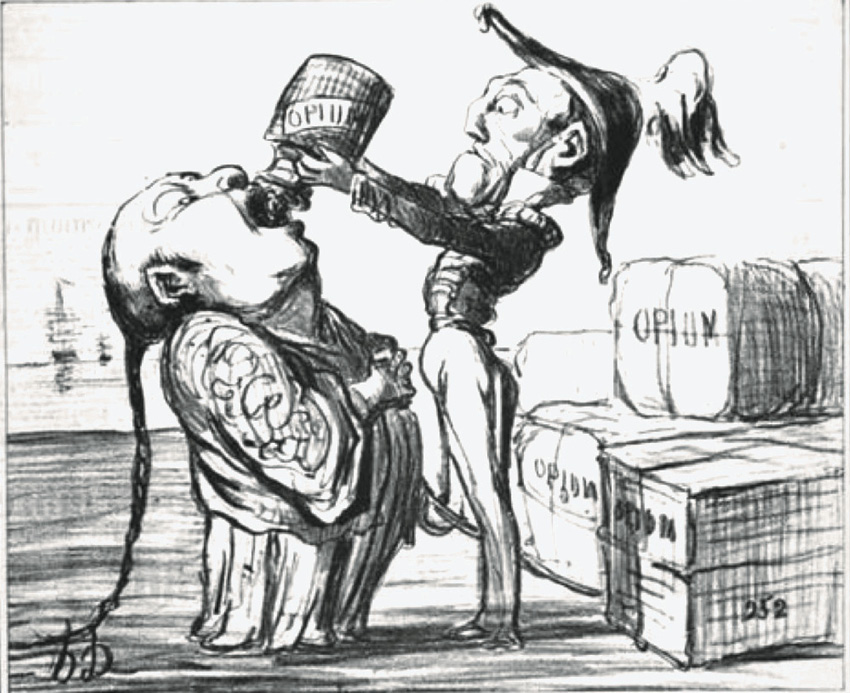 Cartoon of the British Opium Wars against China—Shoving drugs down the throats of the Chinese people.

Almost immediately, American patriots sought to arm China—with machinery. China’s Emperor dispatched Yung Wing (1828-1912), the first Chinese scholar to have graduated from an American university (Yale), not only to purchase American machinery in order to build an arsenal in China of cannon and heavy weapons, but also as part of what the Chinese called the “Self-Strengthening Movement.” This movement was in part intended to assimilate the “machine tool principles” that would bring China into an economic dialogue with the more advanced, but still-struggling United States. America was then itself in the throes of a “civil war,” from the very beginning of Lincoln’s administration. It was, in fact, a rebellion of “slave states” against the Federal Constitution, a conflict which Lincoln and his supporters, such as his ambassador to Russia, Cassius Marcellus Clay, recognized was, in reality, an international conflict. It had been instigated by British and European financial interests through their slavery, opium, and “free trade policies,” as well as their property-title ownership of many of the plantations of the American South. The fact that the manufacturing capabilities of American Northern industry allowed it to emerge from that devastating 1861-65 conflict with an economy that was more productive and stronger than when the conflict began, indicated a scientific breakthrough in economics that intrigued all the world, including China. Learning the principles of Alexander Hamilton’s American Revolution was the self-strengthening that China needed.

The Chinese-American dialogue initiated by Lincoln and his ambassador Burlingame established the Kiangnan Arsenal, or The General Bureau of Machine Manufacture of Jiangnan, to build ships and weapons. The first technical advisers on the shipyard’s construction were Americans, such as the chief engineer, T. F. Falls. (The equipment was leased from the American firm Thomas Hunt and Co.) This resulted in the founding of the Jiangnan Shipyard in 1865 in Shanghai, China, still operating today with a staffing of about 10,500 people.

By 1871, Yung Wing persuaded the Chinese government to establish what came to be known as the Chinese educational mission. This was a group of 120 Chinese young students who came to the Connecticut area to study science and engineering. It was, therefore, the Lincoln faction that first assisted the British-colonized China in creating the machine-tool capability that the nation required to produce the weapons to defend itself. Why is this U.S.-China history never even discussed?

In 1887, Philadelphia’s Wharton Barker, a central “Hamiltonian” republican figure associated with Henry Carey, reported in the publication The American: “Upon the initiative of a syndicate of Philadelphia capitalists, of whom Mr. Wharton Barker is the representative, concessions of far-reaching importance to the future development of the Middle Kingdom, and to the commercial interests of the United States have been granted.... China is rich in mineral wealth. A few mines of coal and gold have been opened. With railways these could be made much more profitable and a number of others would be developed.... To create such a railway system in accordance with the government policy that railroads and mines must belong to the Chinese themselves requires a more orderly system of finances than obtains at present.” Today’s China advancement would please him mightily. 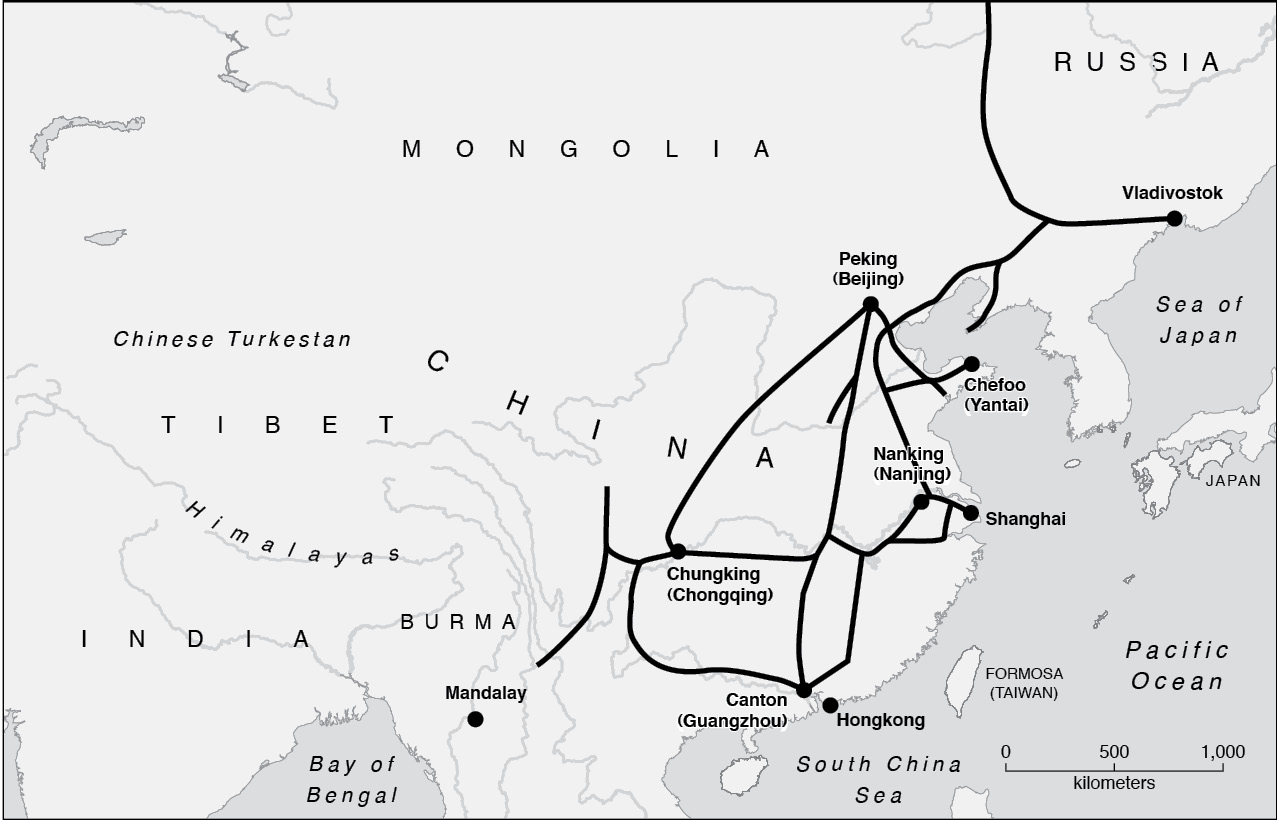 Barker’s proposal for Chinese rail (Figure 1 MAP)—itself an echo of the policy first proposed by Germany’s collaborator with the Lincoln republicans, Friedrich List, in his Outlines of American Political Economy and The National System of Political Economy—would be expanded and transcended by Dr. Sun Yat Sen’s famous railway design described in his 1921 work, The International Development of China. Sun Yat Sen, who led the republican revolution which overthrew the Imperial system in China in 1911, was himself a student of the American System, basing his famous “Three Principles of the People” on Lincoln’s “of the people, by the people, and for the people.”

So why, today, do many Americans believe, if they know anything about it at all, that the Chinese Belt and Road Initiative is a threat to them?

Perhaps this history is unknown today to Americans because that is the way the British faction now deploying treasonous American elements to impeach the President, rather than risk a 2020 election, want it. The 2018 House of Lords report, “U.K. Foreign Policy in a Shifting World Order,” warned that the Trump Administration has taken “a number of high-profile unilateral foreign policy decisions that are contrary to the interests of the United Kingdom,” adding, “Should President Trump win a second term … the damage to U.K./U.S. relations will be longer lasting.” The same report warns that Xi Jinping has declared that China intends to “take centre-stage in world affairs, in two stages, to 2035 and then to 2050,” as if this were a sinister plot against the West.

The Chinese, unlike many in the United States, have not forgotten the evil of the British Empire. President Xi has spoken as recently as in his October 2019 National Day speech of the Chinese “century of humiliation” at the hands of Great Britain, as well as Japan, which was allied with Great Britain against China in the Anglo-Japanese Alliance of 1902-1923. (The United States had plans to fight a two-front war against Japan [War Plan Orange] and Great Britain [War Plan Red] through the 1930s, exactly to counter British imperial policy, and its co-thinkers in Japan.)

LaRouche and the New Silk Road

When Helga Zepp-LaRouche founded the Schiller Institute in 1983, Lyndon LaRouche had already spearheaded a group of researchers in America, Europe, and South America who had successfully rediscovered the American System economists of the 19th Century. This was a real-life application of Schiller’s idea of “universal history,” discussed by him in his famous 1789 lecture in Jena, Germany. The economic-strategic crisis conditions that led to the November 1989 fall of the Berlin Wall and the subsequent 1991 dissolution of the Soviet Union, were knowable. So were their solutions. These were “universal-historical” solutions, expressed in LaRouche documents such as “A Fifty-Year Development Policy for the Indian-Pacific Oceans Basin,” written in 1983. His proposals in that document are still the conceptual basis for a “win-win” negotiation between Presidents Trump and Xi today. 1983 was the same year that President Ronald Reagan adopted the LaRouche-proposed policy of ending the danger of thermonuclear war through the Strategic Defense Initiative (SDI), much to the amazement of, not only the Soviet Union, but also the “Bush-Kissinger faction” inside of the Reagan Administration itself.

In 1991, from jail, LaRouche, in close collaboration with his wife Helga Zepp-LaRouche, renewed his policy discussions with the nations of Eurasia. After the fall of the Berlin Wall, they first presented the “Productive Triangle—Paris-Berlin-Vienna,” and then, following the collapse of the Soviet Union in 1991, they proposed the “Eurasian Land-Bridge,” to integrate the European and Asian populations and industry centers through infrastructure development corridors. This was their vision for a peace order for the 21st Century. The Belt and Road Initiative of China today is in basic affinity with that vision. 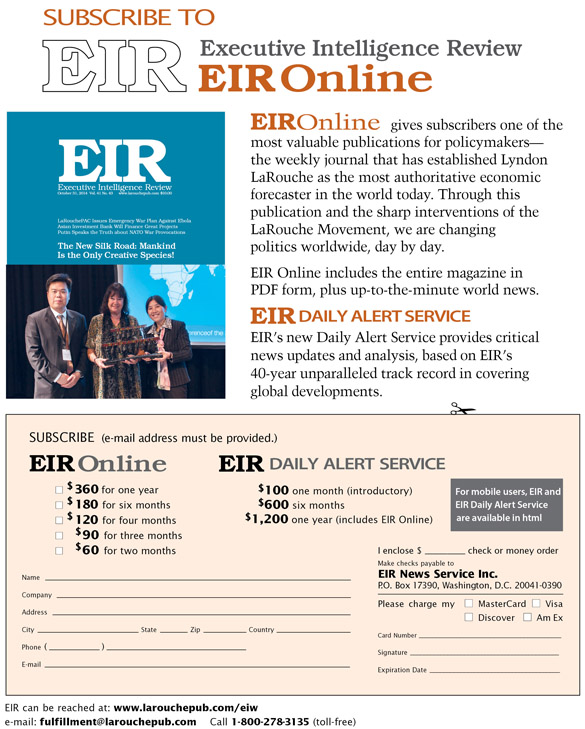