The Quest for Clean and Cheap Energy

This is the edited transcription of the opening remarks by Dr. Björn Peters to the Schiller Institute conference on September 6. Dr. Peters is a physicist, entrepreneur, and political advisor in the fields of energy, sustainability, and commodities. Thank you very much for the invitation. What brought me probably to the invitation is that I’m an energy policy blogger and a specialist and expert in power station financing. These mechanisms work the same a little bit everywhere, and it cannot be stressed more, that the most important condition for development is cheap and clean energy.

Take the 17 UN Sustainable Development Goals; all of them require cheap energy. So, the access to health, to clean water, to education, all is linked to cheap energy. The clean part of it—in Germany we have our very special solution to it, and I believe that it is a big topic in the U.S. at the moment, with California’s black-out, weather-induced black-outs. We haven’t had such situations in Europe yet, but we’re pursuing a similar strategy, and I’m deeply convinced that it won’t work. Let me briefly explain why. 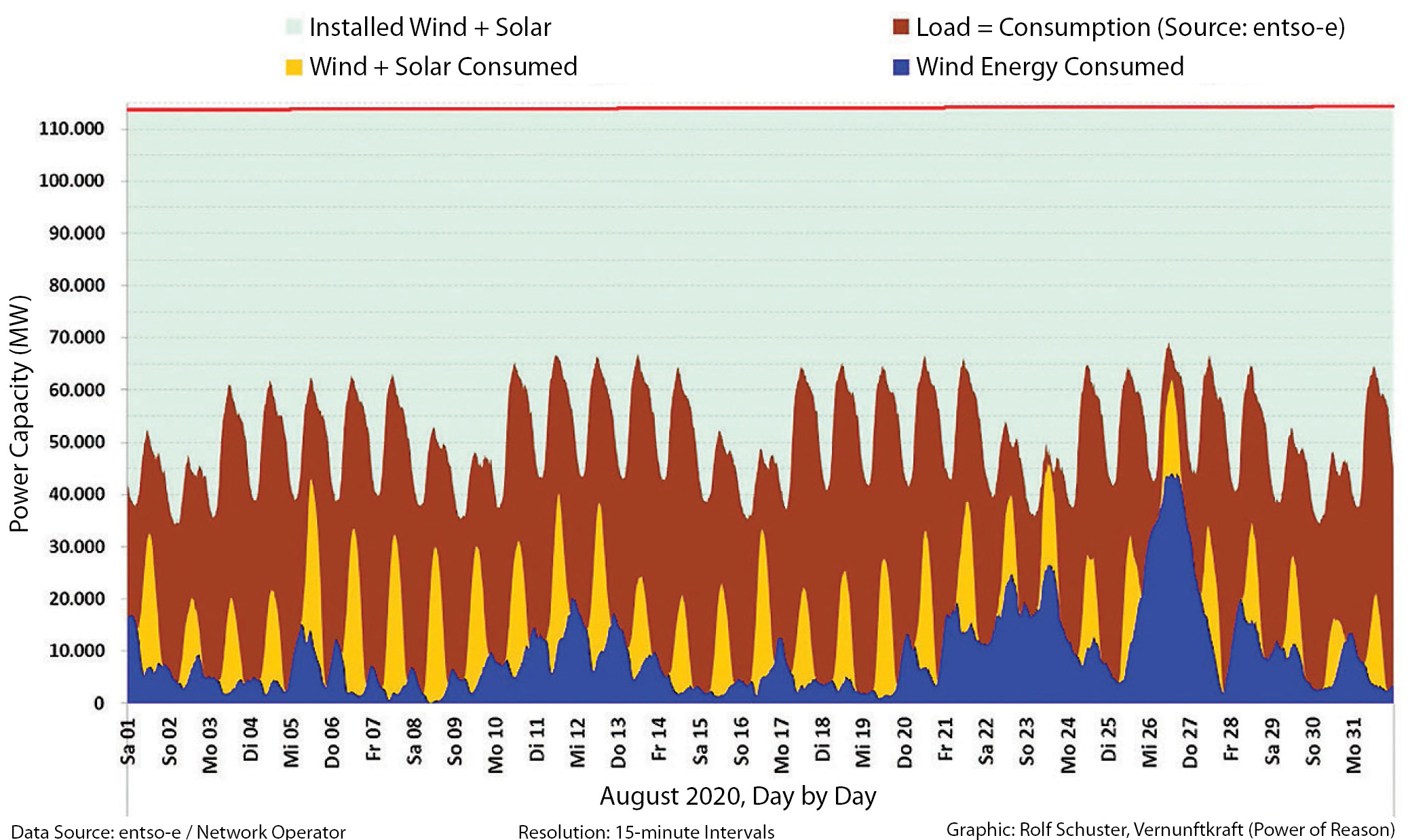 Figure 1 provides the qualitative picture you need to understand. This is one month of power production. From left to right is August 1 to August 31. On the vertical axis is the power produced. The red line at the top is the amount of solar and wind energy we have installed in Germany. It’s far more than we actually need. The peak demand is about 85 GW or 85,000 MW in Germany.

The brown, top area of the three, is the load; it varies between relatively delimited values. The yellow one is the use of solar energy, and the blue is the use of wind energy. The yellow area, as you can see, follows the daily sunrise, so it varies between zero at night and its daytime maximums. Wind energy is more tricky. We do have a relatively constant energy requirement. Of course, over the day, we consume more energy. There is always a baseload.

The challenge is to bring solar and wind energy at times when we don’t have sun and wind. That is something that cannot be solved economically. There’s a lot of technical solutions that actually would work, but would take huge transmission lines. Somewhere on the globe, the Sun is always shining, sure, but you have to build exorbitantly long transmission lines. One can do it with storage, which doesn’t exist, and there are many other such things. But all of it would add an enormous cost to energy production. The dirty little secret of German energy production is that it is by far not as clean as we would like to have it, and in Germany, we have the most expensive power prices in the world nowadays.

If you can learn something from this story, it is that if you make yourself dependent on the weather for power production, you might end up with a very costly system, and nobody ever would copy the system because we need the energy to be cheap as well.

Now, there is a solution to it and that is nuclear energy. Nuclear can be built out limitlessly, so we have enough of it with uranium for millions of years if we take the modern reactors. There’s lots of technical innovation going on in the nuclear space, and this is for both fission and fusion reactors. Fusion is still in the research domain, while fission reactors—I believe China, Korea, and Russia have built very cost-effective ones. Even the new technological developments are out there, that we could use.

The most important challenges are probably two: In the Western societies, there’s a large fraction of the population who are skeptical about nuclear energy. That is something communication-wise that we could address. And as a co-founder of the Nuclear Pride Coalition, which is a global network of civil associations and non-commercial organizations, we will organize many demonstrations across all continents. In this month of September, we have started already yesterday, it will go on the entire month. If you want to support nuclear energy, go look at the Nuclear Pride Coalition, and you might find ways to support us there.

The second challenge is funding, actually. We have lots of start-ups; there are about 50 start-ups that commercialize nuclear energy in the new generation. This is something where there is lots of potential still, but we need usually $1 billion or $2-3 billion to launch one single type of reactor.

So, that is the next challenge, but it will be done, and it will be done in the next decades or so. In fusion programs, there’s still lots of research going on, and I’m a little bit skeptical that we will see lots of fusion reactors in this century. There are a number of economical challenges there that are very hard to overcome. But we never know what technology breakthroughs we will get, so that is certainly something we can hope for, that in the long run, we will have limitless amounts of energy at very low cost. Again, this is one of the prerequisites to having worldwide human development and even ecological development.

To conclude, I believe this German energy transition has essentially failed. We wanted to do this in order to export our ideas about the ecology and the economy of this solar and wind business. We paid half of the world’s learning curve. Nowadays, solar is very cheap, but it has to be refined in order to make it usable when and where we need it. This is an issue that nuclear energy is not facing, so we need to find new ideas.

I’m currently working on a political theory that I call “Ecological Realism” to bring a new picture, a new strategy that we can follow and overcome the communication obstacles as well.

In my view, the future of nuclear energy hasn’t even begun. We have now 70 years or so of experience with it, but the golden era is still to come, and it will make energy in general and all forms of energy for mobility—not only power, but mobility processes—accessible essentially everywhere in the world.