This is the edited transcription of the presentation by Dr. Joycelyn Elders to Panel 2, “The Science of Physical Economy,” of the Schiller Institute’s Nov. 13-14 Conference, “All Moral Resources of Humanity Have To Be Called Up: Mankind Must Be the Immortal Species!” Dr. Elders is the former Surgeon General of the United States. 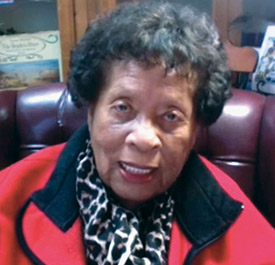 Good afternoon! Greetings to Helga and all of you assembled internationally for this conference of the Schiller Institute on the theme “All Moral Resources of Humanity Have to Be Called Up.”

Last year, as the pandemic was beginning, I was called on by Helga [Zepp-LaRouche] and others to help initiate the Committee for the Coincidence of Opposites to address not simply the COVID crisis, but the broader crisis of the lack of a full, modern health care system accessible to everyone in the U.S., and everyone worldwide. I and others in the Committee have emphasized that food, clean and safe water, electricity, decent housing, sanitation, roads, and other infrastructure are as much a part of good health care as hospitals, medical personnel, and medicine.

Without measures to ensure all of these parameters, it would be difficult to stop this virus, and impossible to stop future variants or new and potentially even more deadly pandemics.

We have passed the grim milestone of over five million deaths worldwide from COVID. This figure is undoubtedly higher, since many deaths in parts of the world may not have been reported. New cases of COVID are now skyrocketing in parts of Europe. The U.S. is far from out of the woods, with the recent average of 70,000 new cases daily, and over 1,000 deaths per day.

At the same time, we’re still seeing hospitals around the country closed or reduced. This is frequently happening in already under-served communities, thereby increasing, rather than lessening health care disparities, especially in poor and minority communities. We have a critical shortage of nurses and other medical personnel.

These matters can no longer be pushed aside. We need a full-scale commitment to expand training, especially of young people, in medical and related fields. I’ve long advocated the training and utilization of youth with our community health workers to aid in immediate public health actions, as well as stepping stones to more advanced instruction. This model has been implemented with good results by Dr. Walter Faggett and others in Washington, DC.

At the same time, we must not lose sight of the world situation. The horrific humanitarian crises today, especially in countries like Afghanistan and Haiti, cry out for our intervention. Recently, my colleague and successor as U.S. Surgeon General, Dr. David Satcher and I responded to Helga LaRouche’s statement regarding the needed approach to the dire health and humanitarian crisis facing Afghanistan, Haiti, and many other nations around the world. I stated, “We would speak about the need for basic necessities for life, such as health care, food, water that is the same for people everywhere, regardless of where you are, or what type of government you have.” The COVID pandemic is exasperating the crisis in previously poor, food- and health-deprived countries.

It is clear that the only way this will be defeated is with a modern health care system in every nation. The Committee for the Coincidence of Opposites has emphasized the need for comprehensive, not piecemeal, solutions. Now is the time for us to end confrontation and engage in cooperation to address the basic needs of humanity.

I would like to conclude with just a few words on the progress of the Committee for the Coincidence of Opposites.

Over the past 16 months, Committee members and collaborators have grown internationally to include physicians, farm leaders, scholars, engineers, religious and civil rights leaders, retired military experts, and concerned people in all fields in many countries. Many are participating in the public dialogue, such as this conference today, and informally in private discussions or initiatives. I already mentioned the Washington, DC initiative, which can serve as a model for youth involvement in public health measures around the world.

The Committee has also been involved in an initiative to provide assistance to the sick and famine-stricken population of Mozambique. This initiative has been spearheaded by Dr. Khadijah Lang. She serves as the chair of the International Affairs Committee of the National Medical Association (NMA), and the Golden State Medical Association—the California branch of the NMA. The NMA is the largest and oldest membership association of black physicians in the United States. This initiative was motivated by the glaring lack of anti-pandemic action, and the failure to address the famine crisis in Africa, and other points of need by economically capable major nations.

This coming week, the Committee will be sending a shipment of medicine, medical supplies, water purification tablets, and high-protein biscuits to Mozambique. We’re also working directly with the World Food Program office in Mozambique to purchase and distribute food in northern Mozambique.

While these are modest efforts, I think this demonstrates how we can approach this crisis and inspire large-scale government action and changes in policy which are urgently needed. Moral indifference to this plight of our fellow human beings must be overcome. If we all work together, I’m sure we can do it. There’s an old Ebo saying: “Not to know is bad. Not to want to know is worse. Not to hope is unthinkable, but not to care is unforgivable.” We must care. I’m sure we can do it. We must get the job done. Thank you.