The New Architecture: A Program To Prevent the Starvation of One Billion People Due to the Sanctions

This is an edited transcript of the remarks of Dennis Small to Panel 2 of the Schiller Institute’s April 9, 2022 conference, “For a Conference to Establish a New Security and Development Architecture for all Nations.” Mr. Small is the Ibero-America Editor of Executive Intelligence Review and the lead author of the Schiller Institute policy paper, “The LaRouche Plan for a New International Economic Architecture.” 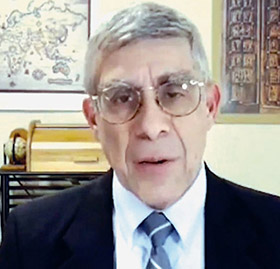 I’m very glad to be here today among this distinguished group of international thoughtful actors, or active thinkers, who are gathered to come up with solutions to the world’s problems.

The problems are great indeed. I’m reminded of what Ramsey Clark once said about what made Lyndon LaRouche so dangerous to his enemies in the international financial establishment is that his organization was a “fertile engine of ideas.” And it is again today exactly that which makes us so much of a threat to the existing financial establishment centered in London with an important branch in Wall Street. It is now urgent that we rev up those engines to deal with a crisis of a magnitude that we haven’t seen since the 14th Century Black Death, if then.

We’re looking down the barrel of the gun of world famine, for example, which whereas just a few months ago, the estimates were 235-250 million people would be dying of starvation over the course of this year, now the best estimates—and they are unfortunately accurate—are that as many as 1 billion people could well die of famine this year. That’s one-eighth of the human population. The situations in particular countries, especially in the Middle East and North Africa, are bad because of their extreme dependence on imports. And by cutting off Russian and Ukrainian exports—the Russians through these super sanctions which have been applied—the two countries together have one-third of all of the wheat that’s traded on the world markets; this hits Africa and the Middle East in particular all the harder. The situation of energy is even worse. That hits Europe particularly hard. Europe is totally dependent upon Russian exports of oil and gas. Germany, the most industrialized of the nations of Europe, gets 24% of its entire energy supply from Russian gas and oil, as you can see in Figure 1. But this is not just hitting Africa; it’s not just hitting Germany. These super sanctions, coming on top of an ongoing collapse of the entire global financial system, are hitting the entire world.

What we are now dealing with, as you can see by looking at Figure 2, Lyndon LaRouche’s famous Triple Curve function, which gives an idea of the relationship of the growth of financial speculative assets and the physical economic collapse underneath that. You can see that this problem actually began with collapsing rates of growth of the physical economy back approximately in 1971, when the floating exchange rate system was introduced internationally. The fixed exchange rate system of Bretton Woods, established by Franklin Delano Roosevelt, was scuttled, and that opened the doors to a tidal wave of speculation which today has created a bubble of derivatives which is anywhere between $1.5 and $2 quadrillion. 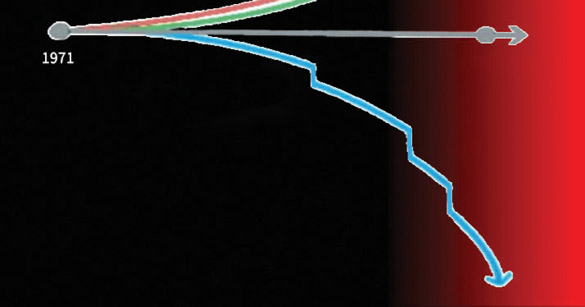 What’s happened, as you can see in Figure 3, the second version of this Triple Curve, is that on top of this ongoing collapse, what we have had is a ratchet down with the pandemic, which caused terrible crises throughout the world. On top of that, there was a further ratchet down by the intentional deindustrialization instituted, coming off the COP26 meeting and the environmentalist program generally internationally. Now there is a third ratchet down of a dramatic sort with these sanctions which have been put in place internationally.

So, since 1971, when the floating exchange rate system was established, that was the beginning of the end of what in fact was the Glass-Steagall system internationally, which separated productive uses of currency and credit from speculative activities. On the international scale, we’re talking about the fixed exchange rate system; within the United States, it’s the Glass-Steagall system. It’s the same thing in terms of economic fundamentals.

Let me turn to the question of how we solve this problem, because I think that’s really where our attention and our discussion must focus. We have put together a program to address this crisis globally, to create a new economic architecture, premised on LaRouche’s basic economic policy centered around his Four Laws.

Now, the thing that you start with, and you always have to start with this, is the physical economy. Not financial aspects, but the physical economy. If you look at the combination of Russia, India, and China—what Primakov called the Strategic Triangle—you can see that these three nations alone, all of whom are being attacked and destroyed by the speculative assaults from London and from Washington and the political assaults and the military assaults as well.

But these three nations combined have 38% of the world’s population; they produce 42% of the wheat, 66% of the steel. Of the new nuclear plants being built, 45%. It’s not like they could function in an autarkical fashion, but they have a very good basis for breaking with the speculative system and establishing—and this is the second point of our proposal—a common currency beginning among these, nations which would establish a fixed exchange rate among them, and with an absolute barrier between them and the speculative dollar system.

There has been much discussion already in financial circles internationally of how you would do this. Would it be backed by gold, by commodities, by what? The key thing that makes a currency worth something, is if it is backed by actual credit which is issued in a productive direction. I’d like to quote for you what Lyndon LaRouche said about this in a June 29, 2005 seminar in Berlin. He said:

The popular conception of money by governments and by leading institutions is insane, by the standards of the effects of the concept and the way it is applied. The value of money should be determined by a scientific principle, not an accounting principle. And the scientific principle is: What is a physically defensible determination of the will of governments and the ability of governments to perform in creating credit over the long term, for the development of their economies and their productivities? You should issue credit on the knowledge of the determination and competence of the government to create value, to create wealth, and to have sufficient wealth to repay the debt you are creating, in a timely fashion. This is a physical question, not an accounting question.

I think this is essential to the task of putting together such a common bloc and a currency to back it up in terms of its physical economic capabilities.

Third is: nations that are part of this salvaging of the physical economies by breaking with the sinking Titanic, have to establish national currencies with fixed exchange rates—not a floating exchange rate, which opens the door to speculation with the dollar—and to defend that with exchange controls. Use that to establish Hamiltonian credit issued toward productive activities of exactly the sort that Lyndon LaRouche was just describing.

The need for such a complete wall between the speculative economy and the productive economy is at the heart of a Glass-Steagall type of arrangement. With that in place as a building block or a starting point, we then have the requirement of those three RIC [Russia, India, China] nations which, remember, were the start of the BRIC after the RIC, and then the BRICS [Brazil, Russia, India, China, South Africa]. They should expand by lending capital for productive activities for third-world development, the developing sector. Most nations of the developing sector will be very happy to join such an arrangement because they’re being literally killed by the policies of the sinking, self-destructing, trans-Atlantic financial system.

It’s extremely important, as a fifth point: for this type of a new arrangement to be offered to the United States and to the nations of Europe. This is what Lyndon LaRouche had always proposed: a Four-Power Agreement of Russia, India, China, and the United States. Where around proposals such as the Belt and Road Initiative of China, the offer is made to the United States and to Europe to join that activity which of course will benefit, not Wall Street, not the City of London, but it will benefit the population and the industry of that entire region. It’s not such a huge change for the United States. It means only going back to the principles of Alexander Hamilton on which our American System of political economy was in fact founded.

Finally, and sixth: we propose that this new orientation, this approach of East-West cooperation for win-win development be applied to Ukraine; the hardest problem perhaps on the planet. Ukraine has been destroyed by 30 years of liberal economic policies, not just by the war. What this has meant is a collapse of its population by a third, a collapse of its labor force, a collapse of its manufacturing labor force by 25%. And this, in an economy which had been one of the most advanced industrial developed, with high technology, aerospace and other capabilities, nuclear energy and so on. And of course, the famous black earth, providing for agricultural capabilities.

These all must be rebuilt, and it must be rebuilt with joint cooperation between East and West. And in that fashion, Ukraine will become not the trigger for a potential thermonuclear war, but a reorganization around a Westphalian principle of the benefit of the other, being the basis for resolving the problems of the entire planet. We must take on the Ukraine challenge, not because it is easy, but because it is hard.